6 tax matters that will dominate 2018

Welcome to the first work day of 2018. By now you (and I) have had enough coffee (maybe, even this late in the day) to think about what the year ahead will hold for taxes.

Chippy the Dog via Giphy.com

Since my personal orbuculum is still a little blurry — I'm blaming equally the aftermath of New Year's Eve festivities and the craziness that now rules Washington, D.C. — I have only six tax-related prognostications.

But even with the fuzzy focus, one thing is clear. Most of what we'll see happen in the tax world in 2018 will be related to the new tax laws now in effect, and which topped my list of last year year's top 10 tax matters.

So, with my mug reloaded with caffeine, here goes my 6 tax forecasts for 2018.

1. Glitches in the new tax measure will mean lots of cleaning up. Or not.
Even under the best of legislative circumstances, changes to the Internal Revenue Code mean unintended consequences and flat-out mistakes. The process used to hurriedly ram the Tax Cuts and Jobs Act (yeah, I know that's not the formal title, but it's catchier that what we ended up with) though Congress was far, far from the best.

The phrase "holy crap" was one of the few printable descriptions of the bill used by folks with experience shepherding tax legislation through Congress.

That means that Capitol Hill will be consumed in 2018 with technical corrections. Typically, this is the effort by the House and Senate to fix a bill's drafting or policy problems, that range from minor mistakes to total rewrites of provisions.

But things are far from typical in Washington, D.C., right now. And that will complicate the tax bill's correction process.

First, there is the size of the bill. It's huge. Many provisions were added and tweaked during unofficial debate of the bill in an effort to get the bare-minimum 51 votes the GOP needed to pass it. That means there are lots and lots of areas that need a once (or more) over. 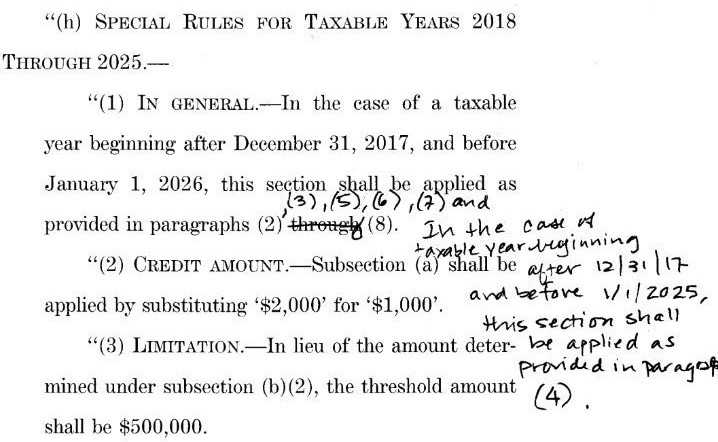 Second, it's vague and depending on the Internal Revenue Service to help clarify things. (See #6 in my 2017 tax review). What the IRS decides here could help or hinder things.

Third, there's the political issues. To make corrections to the tax bill, Republicans will need more help from the Democrats than they got in passing it, which was none. The Senate used budget reconciliation, which required the aforementioned simple majority, to clear the tax bill. The correct it, the upper chamber will need help from at least nine Democrats to get to the necessary 60-vote majority to correct the bill.

Like that's going to happen. Democrats still remember how the GOP wouldn't help fix problems in the Affordable Care Act. So their message to their Republican colleagues, at least right now, is "you broke the tax bill, you bought it."

And that means we taxpayers might just be living with the new tax law problems for longer than we want.

2. Tax changes will be a key midterm elections campaign issue.
Will the tax law changes help or hurt Republicans seeking re-election to the House and Senate in November? That depends.

The GOP is counting on the bill, it's only major legislative victory of 2017, to give them a boost. Before the vote, South Carolina Republican Sen. Lindsey Graham told Fox News Radio, "I think all of us realize that if we fail on taxes, that's the end of the Republican Party's governing majority in 2018. We'll lose the House, probably lose ground in the Senate."

Well, the GOP got its tax bill, but will the savings for most middle-income voters show up in paychecks soon enough and, more importantly, be enough to win voters?

That's a big if, especially since throughout the tax bill debate and even after its enactment, public opinion of the measure has been less than supportive. 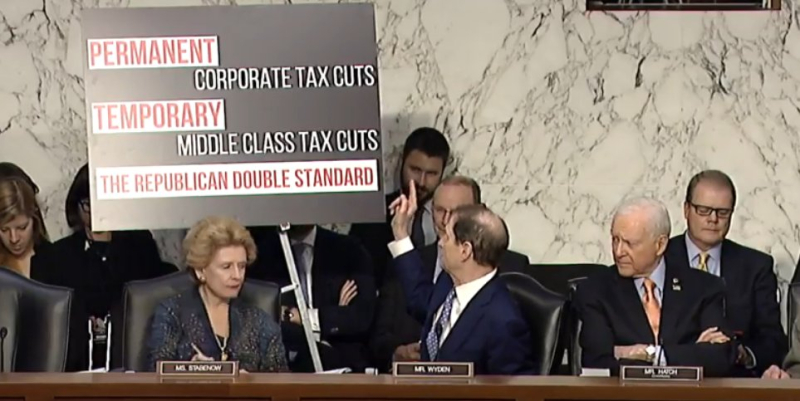 Democrats, meanwhile, will emphasize the much larger savings the tax changes will provide wealthier Americans. Plus, they'll point out that the bill's major corporate tax cut is permanent, but individual tax breaks are set to expire at the end of 2025.

Yep, it's going to be a loooong campaign season.

3. The SALT deduction limit will alter America's housing industry.
Among those voters the Democrats are counting on are those in high-tax states. Even with lower tax rates for many, a lot of these folks will take a tax hit because of the new law's $10,000 limit on itemized state and local taxes (SALT). 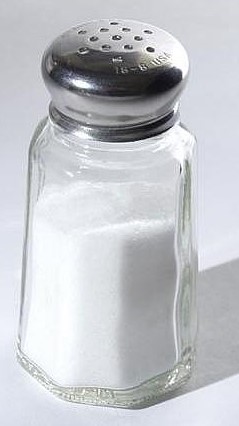 That cap, they argue, is way too low to account for the income or sales taxes and residential property taxes that they are used to deducting.

A lot of folks in such situations will simply deal with the loss of tax breaks and try to hold on until the provision expires in 2025. Or they'll vote (see #2 above) for candidates they think might be able to repeal or at least ease the limit.

Or, say some in the housing industry, they'll move to lower-tax tax locales. There's some data to support this possibility.

In a recent survey by real estate brokerage Redfin of 900 homebuyers, one-third of respondents said that they would consider moving to another state if they could no longer deduct state and local taxes.

Nela Richardson, Redfin's chief economist, forecast in the company's 2018 prediction of the state of housing that the elimination of these deductions will adversely impact high-tax states like California, New York, New Jersey, Maryland, Massachusetts and Illinois.

And that, worry real estate and housing industry officials, could send the housing markets in high-tax states into a downward spiral. An exodus will lead to a flattening or decline in prices, especially in the luxury markets as high-wealth individuals leave.

The loss of richer residents' income and home-related taxes ultimately will lead to state government revenue losses, say the opponents of the tax bill's SALT deduction cap. And that will lead to state and local service cuts, that will prompt an increase in taxes in those areas or elimination of the services.

I think folks in the realty/housing sectors are being a bit hyperbolic. Yes, some folks will move, but I doubt it will be droves. There's a lot more to consider than taxes when it comes to relocations.

Remember, too, that wealthier homeowners will have access to high-paid tax professionals who should be able to make the most out of tax glitches mentioned in forecast #1, so they won't have to move.

But it is true that as all homeowners adjust to the changes in tax breaks they've likely used for as long as they've owned their houses, there will be some short term real estate effects. It's more likely, however, that people will stay in their current homes or, if they buy, they'll choose smaller homes that are more appropriate for their needs.

And that's not necessarily a bad thing.

4. States will revise their tax systems, too.
To keep residents from relocating or getting hit too hard by federal tax law changes, look for states, especially those (few) run by Democrats and/or high-tax locales, to tweak their state tax codes. 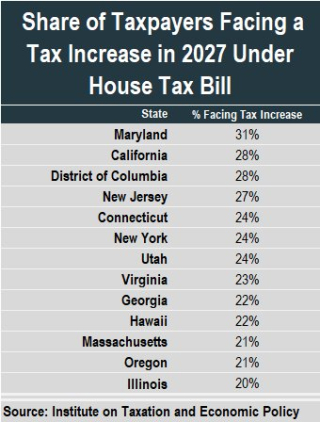 One idea being floated is replacing an income tax with a payroll tax levied only on employers. If employers pay the payroll tax and reduce employees' salaries by the same amount, workers wouldn't have to deduct anything and would wind up being paid the same. States also would collect the same amount of revenue.

My favorite idea, though, is to essential restore the full SALT federal deduction by making the amount in excess of the $10,000 cap a charitable contribution to the collecting, I'm sorry, donee government. That amount then could be fully deducted as an itemized charitable gift on Schedule A, which is still allowed under the new tax law.

Or at least try.

House Speaker Rep. Paul Ryan (R-Wisconsin) has already made it clear that's his plan. He's getting some support from colleagues, especially so-called deficit hawks who stifled their fiscal tendencies briefly to OK the costly tax bill.

Senate Majority Leader Mitch McConnell (R-Kentucky), however, is not as committed to this course, at least pre-midterms. With a reduced majority thanks to the Democrats surprise victory in the Alabama special election, McConnell is at least giving lip service to a bipartisan approach in that body.

If that happens, at least for some specific measures, it definitely won't happen on entitlement reform. If fact, Democrats will be using the possibility of Medicare and Social Security cuts as part of their campaign efforts to unseat Republicans (see #2) since older voters who rely on or about to qualify for these programs already are the most reliable voting bloc. 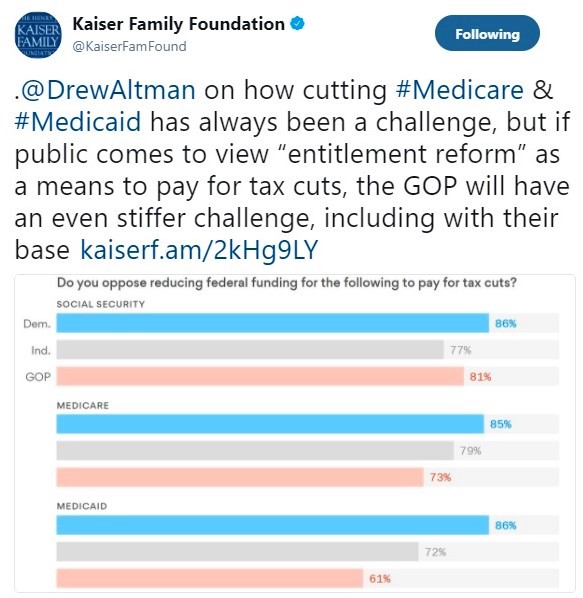 So that actually means, notes the Kaiser Family Foundation, that tax cuts could make it harder to make entitlement changes.

6. Robots will continue to make tax inroads.
Finally! Something in 2018 that's not related to the new tax law. But it's just as scary.

Despite warnings for the last few years, robots aren't doing our taxes. Yet.

But artificial intelligence and more automation is continuing its inexorable march into the tax world.

Don't worry. There won't be Westworld tax preparation chains; nobody would trust any of those animatronic figures. But H&R Block has explored virtual tax reality.

And more tax AI is inevitable.

And changes are being made at the support staff level. Some entry level workers who input data already have been replaced by automated ways to accomplish this.

Overall, though, the key concept to keep in mind is that nonhuman help is a tax accessory, not the full package.

As I told Silverfin, a major provider of accounting automation software to European financial services companies, last August: "You’ll never be able to automate the individual, personal analysis that is key to an accountant's job. Face-to-face advice and explanations to clients can never be replaced."

AI will give tax pros ways to hand off routine taxes, freeing up time for what they do best: provide knowledge, strategy and one-on-one counselling to clients for bigger-picture financial advice.

So in 2018, welcome your robot tax helpers. You're going to need all the extra time you can get to sort through the new tax laws!

It is always helpful to predict (1) where we should end up after using the 2017 tax software (I've prepared a less impressive Excel W/S estimate already), as well as (2) preparing an estimate for 2018 so I can recompute our required withholding and quarterly payments.