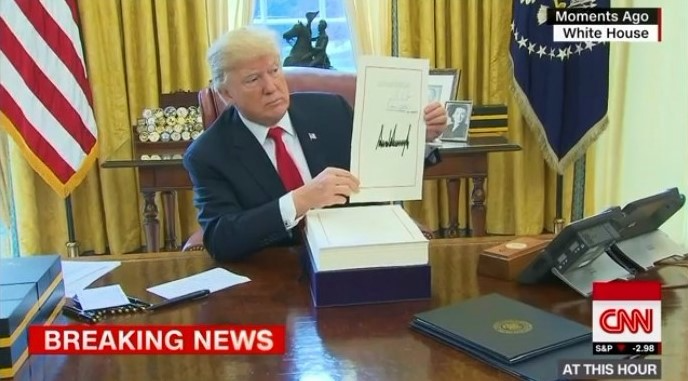 Donald J. Trump displays his signature he affixed this morning to the GOP tax bill law, holding it over the stack of legislation that now takes effect, for the most part, on Jan. 1, 2018. (CNN screenshot; click image to watch the full signing)

There are just three shopping days left until Christmas, but the shopper in chief is done. Donald J. Trump this week got Americans the present he's been promising for months, "a big, beautiful tax cut."

It was a subdued ending to the bill that was a cornerstone of Trump's presidential campaign and which generated a lot of debate in the media if not actually on Capitol Hill.

But, noted Trump as he prepared to wield his Oval Office pen, he wanted to make sure he followed through on his Christmas present pledge. And that it was covered by the media, fake and otherwise.

For all y'all worried about this anticlimactic finalization, don't be.

The White House is planning a splashier ceremony in January when Representatives and Senators return to work. That will once again give the GOP a chance to tout what they see as the bill's virtues.

That's not a bad idea politically, since their tax bill party on the White House South Lawn notwithstanding, it might be the last bit of celebrating they get before Congress hunkers down to work on other matters, like shoring up health care coverage and dealing with the deficit increase the tax bill will produce.

Initial tax bill Medicare worries: In fact, those deficits had caused some speculation, even in Trump's inner financial circle, that he would wait until January to make the tax bill the law of the land.

The reason was concern about how the timing would affect automatic spending cuts triggered by the tax plan. The biggest worry was a $25 billion Medicare cut would be set in motion to, under Congressional pay-as-you-go (PAYGO) rules, offset the new tax bill's increases the deficit.

If Trump had waited until the first business day of 2019, the automatic cuts would have been pushed into 2019.

So should Medicare patients, including my octogenarian mother, be worried?

GOP leaders had always said no. In fact, even before the Senate first voted on the measure, Senate Majority Leader Mitch McConnell (R-Kentucky) and House Speaker Paul Ryan (R-Wisconsin) released a statement to assuage this concern:

"Critics of tax reform are claiming the legislation would lead to massive, across-the-board spending cuts in vital programs — including a four percent reduction in Medicare — due to the Pay-Go law enacted in 2010. This will not happen. Congress has readily available methods to waive this law, which has never been enforced since its enactment. There is no reason to believe that Congress would not act again to prevent a sequester, and we will work to ensure these spending cuts are prevented."

And it appears they kept their promise, too.

A PAYGO waiver was part of the short-term federal spending bill that Congress just approved to keep the U.S. government operational through Jan. 19, 2018. That, as much as Trump's desire to gig the mainstream media, was a key reason why he signed the bill today.

Returning the tax bill gift: I've been watching Congress for more years than I'm willing to admit. And I worked on Capitol Hill during the debate on enactment of the last big tax bill, the historic Tax Reform Act of 1986.

Given those experiences, I'm well aware that federal lawmakers often have totally different perspectives on legislation, tax and otherwise, than do their constituents.

So I'm waiting to see if the GOP can flip the current negative view that most Americans, at least according to polls, have of their tax handiwork.

If not, all those disgruntled taxpayers have an eventual recourse.

The individual tax laws themselves will, for the most part, expire at the end of 2025. That was a requirement to meet the financial limitations of the reconciliation process that the Senate used to pass the bill.

But if before then this new tax law gift turns out to be like so many presents where the giver doesn't know exactly what we want (even when we write it down, drop hints or share email links where it can be purchased, but I digress) we can return it.

The return receipt is our ballot on Nov. 6, 2018, the coming midterm election day.

There's still a lot of confusion about what it all means. We'll have to wait for additional guidance from the Internal Revenue Service, which is charged with actually putting into place how we will comply next year with these laws.

But until then, enjoy reading and Merry Taxmas to us all!

the new tax law makes no change in IRS tax treatment of Bitcoin and other cryptocurrencies. The transactions involving them are still treated as capital gains or losses.

what does this mean for holders of bitcoin and their tax liability?