Home Table of Contents Tax Tips Credits Deductions Refunds State Taxes Politics/Laws Tax Terms Archives
10 tax moves to make by Dec. 31 — and before Congress changes the tax laws
The tax writing's on the bill, some of it possibly from more than 6,200 lobbyists

8 differences to be reconciled in House & Senate tax bills 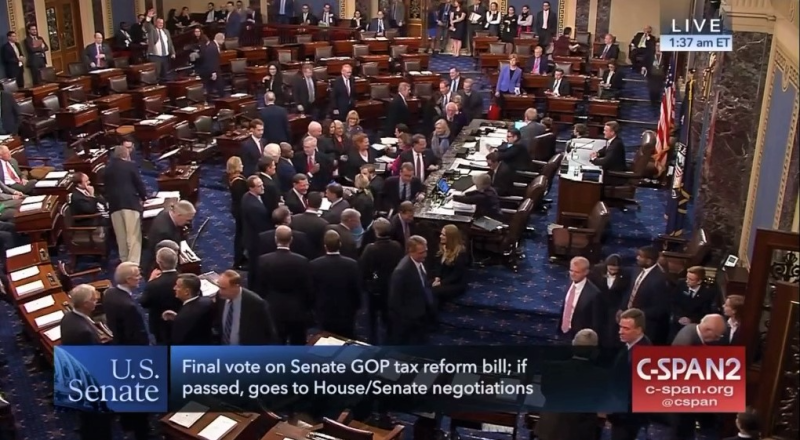 After 14½ hours of debate, the U.S. Senate early on Saturday, Dec. 2, approved 51-49 its version of tax reform. Now the hard work starts. (C-SPAN2 screenshot; click image to watch video of the full debate and votes)

It's alive! Tax reform, or at least tax cuts (for a while, for some people) survived a marathon session in the Senate, with that chamber approving its Internal Revenue Code revisions early Saturday, Dec. 2, morning.

Since the House version (H.R. 1, the Tax Cuts and Jobs Act) passed on Nov. 16 is different from the Senate's bill, the two legislative bodies must send members to a conference committee to mash up the two measures.

It won't be easy. While both the House and Senate bills cut corporate taxes and taxes on individuals, the bills diverge in some major areas.

Here are some of the biggest differences that have to be ironed out.

The House wants to reduce those to just four individual rates — 12 percent, 25 percent, 35 percent and 39.6 percent — and income tax brackets, with the top tax kicking in on single filers who make more than $500,000 and more than $1 million for jointly filing married couples. That's much higher than the $418,401 for single filers and $470,701 for married joint filers at which the current 39.6 percent rate is imposed.

The Senate proposes keeping seven individual tax rates, but the highest tax it imposes on individuals is 38.5 percent, which applies to individuals earning more than $500,000 and married couples with combined income of $1 million.

The other six tax rates the Senate says would apply to us much less-wealthy filers are 10 percent, 12 percent, 22 percent, 24 percent, 32 percent and 35 percent.

On the corporate side, the House cuts the business tax rate from a nominal 35 percent to 20 percent starting in 2018. H.R. 1 also makes its individual and corporate tax rates permanent.

Under the Senate bill, the corporate tax rate also is cut to 20 percent and is permanent. It won't, however, drop until the 2019 tax year.

Meanwhile, individual tax cuts per the Senate would become law in 2018, but they would expire in 2025. The limited life span is so that the Senate can comply with its rule that tax changes don't create deficits beyond what is allowed under the approved budget amount.

2. Pass-through entities
Under this tax structure, income from certain businesses — such as sole proprietorships, partnerships, limited liability companies (LLC) and S-corporations — is passed through to the business owners, who then report it on their personal tax returns to be taxed at their individual ordinary tax rates.

Both the House and Senate bills lower taxes on the business portion of a filer's pass-through income. But they do so differently.

The House bill cuts the top income tax rate for pass-through money to 25 percent from 39.6 percent. It also prohibits individuals who provide professional services, such as lawyers and accountants, from taking advantage of the lower rate. And it phases in a lower rate of 9 percent for businesses that earn less than $75,000.

Rather than setting a specific tax rate for pass-through income, the Senate bill lets such business owners deduct 23 percent of their income. Similar to the House bill, some service businesses would be prevented from taking the tax break; those making $250,000 if a single filer or twice that for married filing jointly couples could not claim the deduction.

3. Estate tax
The House bill would eliminate the so-called death tax beginning in 2024. Before the estate tax ends, the amount that could be left tax-free to heirs would double. Under current law for tax year 2017, that's $5.49 million per person or $10.98 per married couple.

And heirs who sold shares of stocks they were left would not have to pay any capital gains tax on the proceeds.

Rather than repeal the estate tax, the Senate increases the amount that can passed tax-free to loved ones and friends from the current nearly $5.5 million to $11 million.

The Senate also wanted to kill the AMT, but budget considerations forced the Upper Chamber to retain the tax. The Senate bill does, however, increase the amount of income exempt from the AMT.

5. Mortgage interest and other home-related deductions
The House bill keeps, but reduces for new buyers, the amount of mortgage interest that can be claimed as an itemized deduction. H.R. 1 would let borrowers deduct interest on up to $500,000, half the loan amount allowed under current law.

As for property taxes, another now fully deductible home-related expense, both the House and Senate tax bills would limit the amount of real estate taxes that could claimed by itemizers to $10,000.

The bills also change how homeowners can profit tax-free from the sale of their residences.

Current law allows sellers to generally exclude $250,000, or $500,000 for those filing jointly, from capital gains when selling their primary residence as long as they've lived in it for two out of the past five years. Both the House and Senate want to increase the live-in time period to five out of the last eight years.

6. Child tax credit
Parents and guardians currently can claim a tax credit of $1,000 for each dependent child younger than 17.

The House bill would increase the credit to $1,600 per child.

The Senate's child tax credit would increase to $2,000 per child. It also would be available for any children younger than 18, but would revert to the 17-year-old limit in 2025.

Both versions would be subject to income phaseouts. Opponents of both bills say that since the child tax credit is only available to parents who pay income taxes, more than 10 million children in low-income families would be excluded from the increased tax break.

While these components of the of the various deductible state and local taxes, known in the tax world by the acronym SALT, were approved by their respective chambers, expect opponents of the change — including some Republican House members — to fight the SALT elimination provisions again in any conference version.

The House bill originally got rid of the adoption tax credit, but added it back in after objections from some GOP lawmakers. The Senate bill would leave the adoption credit in the tax code.

Both bills also eliminate the above-the-line deductions for student loan interest and moving expenses, as well as the itemized one allowed under miscellaneous expenses for tax preparation fees.

And then there's the medical tax deduction.

Current tax law allows Americans to deduct as itemized expenses qualified medical costs that come to more than 10 percent of a taxpayer's adjusted gross income (AGI). This can include a variety of medical expenses above and beyond just the standard doctor, dental and vision expenses. It is a tax breaks especially used by people with chronic illnesses.

The House bill repeals the medical deduction option. The Senate bill, however, keeps it and goes back to the prior 7.5 percent of AGI threshold for tax years 2017 (retroactively) and 2018, that was increased to 10 percent as part of the Affordable Care Act.

8. Affordable Care Act individual mandate
And about the ACA, or Obamacare as it's still popularly known, has come back into play in the tax reform debate.

Originally, the House and Senate wanted to repeal it and its many taxes to free up money to make tax cuts easier from a budgetary standpoint. That didn't happen.

But a part of the health care law has been worked into the Senate tax reform bill. Or rather, worked out of the tax code.

The Senate's bill would repeal the ACA's individual mandate. This is the health care law's requirement that individuals buy at least a minimally acceptable medical insurance policy or pay a tax penalty for going without coverage.

The House keeps the Obamacare insurance coverage requirement on the books.

If Ryan sticks with that stance, the ACA issue could be one of the easier provisions that conference committee members will tackle. However, they could get push pack similar to that they faced during their chambers' specific Obamacare repeal efforts, especially since the CBO says that striking the ACA mandate will mean 13 million more Americans would be uninsured by 2027.

Much tax reform work left to do: The bottom line is that there is still a lot of work to be done before we get any tax bill. And it won't be easy.

The Senate bill is 479 pages long, with many changes made — some of them by nearly illegible scribbling in the bill's margins — at the last minute as the final vote neared.

That process infuriated a lot of Senators, and by a lot I mean all 46 Democrats and two Independents.

Their frustration was summed up by Democratic Sen. Jon Tester of Montana who took to Twitter last night to exasperatedly complain, "I was just handed a 479-page tax bill a few hours before the vote. One page literally has hand scribbled policy changes on it that can’t be read. This is Washington, D.C. at its worst. Montanans deserve so much better."

I was just handed a 479-page tax bill a few hours before the vote. One page literally has hand scribbled policy changes on it that can’t be read. This is Washington, D.C. at its worst.  Montanans deserve so much better. pic.twitter.com/q6lTpXoXS0

Yep, the Treasure State's senior senator lived up to his surname in his testy nailing of the problem with the way Congress, and the Senate in particular last night/early this morning, has operated when it comes to controversial legislation.

Math, not massive size of bill, at issue: Maybe members of Congress will get/take time to read the massive Senate tax bill and carefully compare it to the House version before any final decisions are made in the upcoming conference committee deliberations.

But the biggest obstacle is not legislative language. It's budget math.

The CBO estimates that the House bill will increase the deficit past the initial 10-year window. That's a no-go as far as Senate rules are concerned.

Whew! Just sneaked in under the budget line.

The Senate got to the acceptable deficit amount by using the sunset gimmick that ends almost all individual tax breaks at the end of 2025 so that the corporate tax break can become permanent parts of the Internal Revenue Code.

Any changes that are made in the tax reform bill conference committee will have to take the Senate deficit requirements into account to assure that a final bill can make it through that chamber. Again.

Tax reform is ____: Hunker down, folks. This ride is far from over.

To borrow Donald J. Trump's observation during the failed Obamacare repeal and replace effort, who knew tax reform could be so hard?

Or, per my witty Twitter tax pal Joe Kristan in deciphering the #TRIH hashtag, it also is many other things: 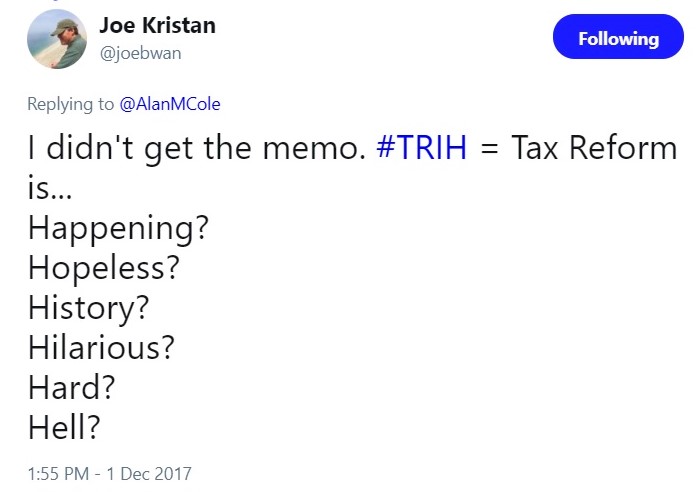 Let me add one more: Hypocritical.

the congress is penalizing Americans to help TRUMP!! I can't wait to vote in 2018.
Please keep medical tax deductions. Older or ill people need those deductions.
Taxation without representation.