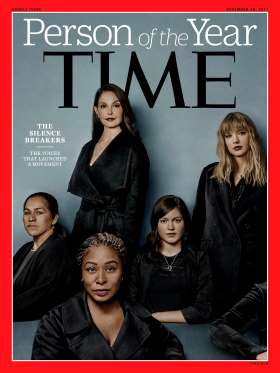 The magazine selected all the women and men who who publicly spoke about being victims of sexual harassment and abuse as a way to stop it and help others who have been victims, known on social media as the #MeToo movement.

Ironically, today's announcement of Time's 90th most notable person (called Man or Woman of the year until 1999) was overshadowed by the continuing sexual harassment controversy in the political world.

Sitting and wannabe Senator troubles: Roy Moore, who is seeking Attorney General Jeff Session's former Senate seat in Alabama, is dogged by allegations of reported interest in teenage girls when he was a 30-something district attorney.

The charges from several women have become a central issue in the 70-year-old former judge's campaign. Alabama voters will decide on Dec. 12, so we're in for extensive coverage of the race until then … and probably well after election day, too.

Then there's already sitting Sen. Al Franken. The Democrat from Minnesota today faced calls from more than two dozen in his Party to resign his seat in the wake of more charges of improper sexual advances.

Capitol Hill self-disciplinary, legislative actions: Congress already has taken steps to police itself, with the House and Senate in the process of establishing training sessions to educate members on how to not sexually harass or assault other people. (I never thought I'd ever have to type such a sentence.)

In addition, lawmakers have reacted legislatively after learning that some of their colleagues settled sexual harassment lawsuits or threats of legal action by using federal dollars to pay accusers.

This week (Dec. 5), Marino followed up that bill by introducing H.R. 4540. This companion piece of legislation would require that members of Congress who already have made such taxpayer-funded sexual harassment settlements pay that money back, with interest, from their own bank accounts.

Tax reform axes harassment deduction: The issue of sexual harassment also made it into the tax reform bill debated by  the House and Senate and now awaiting action by a conference committee to meld them into one piece of legislation to be voted on again by both chambers.

When that happens, it looks like H.R. 1, the Tax Cuts and Jobs Act, will contain a provision that would disallow tax deductions on sexual harassment legal settlements.

Current tax law allows many payouts and legal fees resulting from these types of cases to be written off as business expenses.

The tax bill language came from a House-offered amendment, authored by Colorado Republican Rep. Ken Buck, to H.R. 1. In a press release, Buck noted his proposal would eliminate "the business expense deduction for hush money associated with sexual assault and sexual harassment cases."

For all y'all tax policy wonks, the tax bill's specific language, found on pages 188 and 189, says: 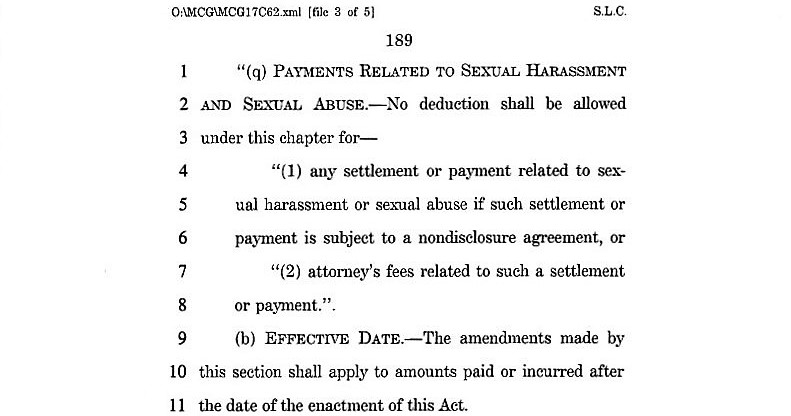 In case you can't read that image above on your mobile device, here's the text version:

SEC. 13307. DENIAL OF DEDUCTION FOR SETTLEMENTS SUBJECT TO NONDISCLOSURE AGREEMENTS PAID IN CONNECTION WITH SEXUAL HARASSMENT OR SEXUAL ABUSE.

(a) DENIAL OF DEDUCTION. — Section 162 is amended by redesignating subsection (q) as subsection (r) and by inserting after subsection (p) the following new subsection:

"(q) PAYMENTS RELATED TO SEXUAL HARASSMENT AND SEXUAL ABUSE. -- No deduction shall be allowed under this chapter for —

"(2) attorney's fees related to such a settlement or payment."

(b) EFFECTIVE DATE. — The amendments made by this section shall apply to amounts paid or incurred after the date of the enactment of this Act.

Given all the other things the House and Senate tax bill conferees must resolve, I suspect this section will make it into the final measure without any changes and ultimately into law.

I wondered about this loop-hole when the Harvey Weinstein issue was first reported. I can only state unequivically that I was shocked to discover that this was a common practice. Didn't anyone from IRS ever AUDIT these people to clarify what the expense was for? If not, then the IRS is more incompetent than I had ever imagined. And if so, why didn't someone from the IRS blow the whistle? I would expect something like this to happen in Russia, not the U.S., but I am learning not to be shocked anymore about pretty much everything. I just get depreseed when I read about it now. I can understand now why Trump didn't want to disclose his tax records. Has anyone reviewed them for similar settlements as "business expenses". In addition, it just makes you wonder about the morality of the tax people who condoned this practice! They should be decertified at the very least.