Merry Christmas Eve! I hope you have all your presents at least in hand, if not wrapped and under the tree.

And I hope they didn't set you back as much as the gifts given by the true love in the classic "12 Days of Christmas" tune. 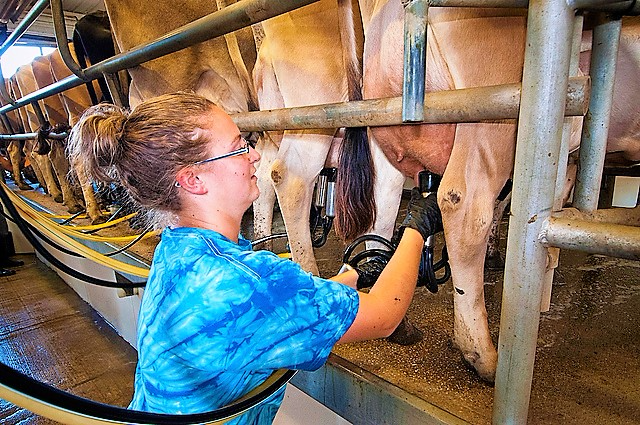 The least expensive of the 12 gifts in the classic Christmas carol was the eight milking maids. Maybe that's because, like farm manager Courtney Biggs at Chapel's Country Creamery in Easton, Maryland, they use modern milking methods. (U.S. Department of Agriculture photo by Bob Nichols via Flickr CC)

The annual PNC Christmas Price Index says that all those leaping lords and milking maids and the lone partridge will cost you $34,558.65 this year.

The good news, though, is that the 2017 cost is just 0.6 percent more than in 2016, according to The PNC Financial Services Group's 34th annual holiday economic analysis. That's less than the government's Consumer Price Index, which increased 2.2 percent through September for the past 12 months.

Still, that nearly $35,000 (which likely includes taxes for many of the goods and services) shelled out by true loves for the multiple Christmas gifts is this week's By the Numbers figure.

Flat prices keep overall increase low: So exactly how do the gifts tallied by PNC Financial break out by cost in 2017?

Of the 12 items measured by the index, nine remained the same price as last year. That's the main reason this year's increase was small.

The three that did see price increases, according to PNC, were:

Overall, here are the lyrical bottom-line amounts for the song's daily Christmas gifts this year:

Historic true love Christmas costs: A PNC predecessor bank in Philadelphia began estimating the cost of the 12 Christmas gifts in the song in 1984 as a holiday client letter.

This price this year is 83 percent higher than the inaugural report 33 years ago.

As part of its annual tradition, PNC also tabulates the "True Cost of Christmas," which is the total cost of all items bestowed by a truly true love who repeats all the song's verses.