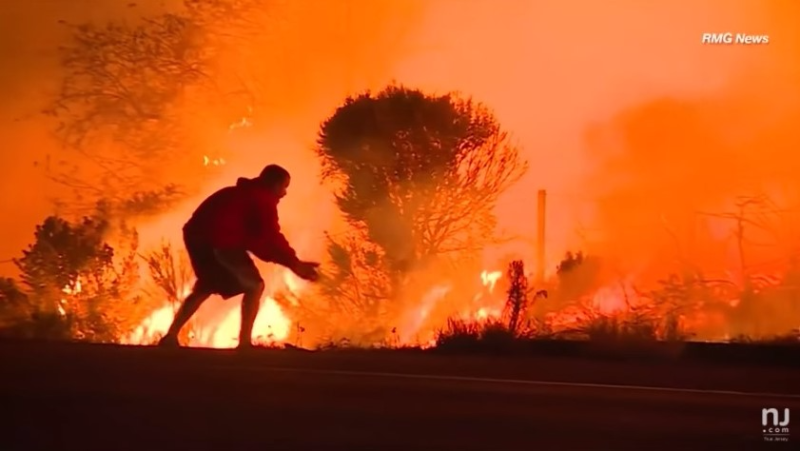 A driver pulled over in La Conchita, California, the evening of Dec. 6 to save a rabbit he spotted scurrying amid flames from the Thomas Fire in Ventura County. Click image to watch full video posted on YouTube by RMG News/Reuters/NJ.com.

California is on fire. Literally. Again.

Just two months after the northern part of the Golden State was ablaze, deadly wildfires are raging across Southern California.

And while residents right now are simply trying to stay safe and, if possible, save as much of their personal possessions as they can, in a few weeks or months, they'll be trying to recover.

In the past, the tax code offered help. But under tax reform that's now being worked out in a Congressional conference committee, that assistance could be gone.

In fact, it does away with the current itemized tax break that, in addition to covering damage from an angry Mother Nature, allows for tax loss claims in the case of things such as accidents, thefts or vandalism.'

H.R. 1, the Tax Cuts and Jobs Act tax reform bill approved by the House in mid-November, axed the casualty loss deduction along with most other Schedule A claims. It retains, however, the tax break in areas declared major federal disaster areas.

That means that losses from the recent hurricanes that devastated the United States, notably Harvey in Texas and Irma in Florida and other parts of the southeastern United States, as well as the from the October wildfires that charred Northern California wine country, would get the tax relief.

But victims of the fires still burning in Southern California would be out of luck unless the areas are declared major disasters.

And if that designation doesn't happen for all of the latest fires or the final tax reform bill doesn't change and/or keep the general casualty loss provision, many Southern Californians would be affected.

Special, but not likely, action required: Congress would have to pass special one-off legislation to provide tax and fiscal relief for residents who sustain damages from destructive and but not deemed large-scale enough disasters to get the major, tax-deductible status.

Such special bills have been approved in the past, for example some added tax measures were approved for Hurricane Katrina and Rita victims.

But as we've seen during more recent debates over special appropriations for hard-hit areas, such as Hurricane Sandy, politics has come more into play.

Points of view have become even more stringent and Capitol Hill relationships have grown even more strained, so such special relief, tax and otherwise, could be hard to accomplish.

It also could be complicated further by fiscal considerations in the wake of the $1.5 trillion deficit the tax reform legislation will produce.

"Non-major" victims hurt: And such bills would be nigh impossible to pass for smaller scale destruction that doesn't affect as many, but is still devastating to the relatively fewer victims, Rep. Brad Sherman (D-California) told the Los Angeles Times.

Many California fires — as well as blazes in other states, particularly in the western part of the country — do not get the major disaster designation.

House Minority Leader Nancy Pelosi, whose Congressional district covers San Francisco, criticized Republican members of the California delegation for approving a tax bill that could adversely affect many of their state's residents.

"They actually voted for that bill," Pelosi said during her weekly news conference on Dec. 6. "[The members] voted to discriminate against victims of fire. We certainly want to have the deduction for victims of hurricanes and the rest, but why are they doing this to our state?"

Other bills, conference hope: House Majority Leader Kevin McCarthy (R-California, specifically Bakersfield) notes that his GOP colleague Rep. Mimi Walters of Irvine is pushing to get relief for the most recent California fires passed this year.

Another Californian, Republican Rep. Devin Nunes, also is a member of the tax bill conference committee. So is Democratic Rep. Raúl Grijalva of Arizona, a state that sustains its share of wildfire destruction every year.

Will those lawmakers be able to tweak the tax reform bill in a way to help their constituents? If that happens, will it then open the door to more requests for state or district-specific needs to be addressed in the tax bill?

If so, that could bog down the whole conference process.

But without some concessions, getting a final tax reform bill through the House and Senate yet another time could be harder.

Who knew tax reform debate could be so fiery? And hard.

In actual practice, hardly anyone gets to deduct personal casualty losses under the current law.
There are several obstacles.
1) First, they have to be able to itemize their deductions.
2) They have to reduce the loss by 10% of their adjusted gross income.
3) They have to further reduce the deduction by another $100.
(Who the heck added that little idiocy, I don't know.)

And they can only do all that IF
a) They first get valuations for the assets that were damaged - values before and after the disaster.
(This step is seriously frustrating for disaster victims - and is often what prevents them from ever filing to take advantage of the personal casualty loss.)
b) Reduce all losses by insurance settlements (if any) and have to wait for the insurance to settle to know what the reimbursements will be.

It IS quite infuriating that folks facing casualty losses, high medical expenses and high employee business expenses that they pay out of pocket will face major tax increases.