Beer, wine and liquor get savings under new tax law 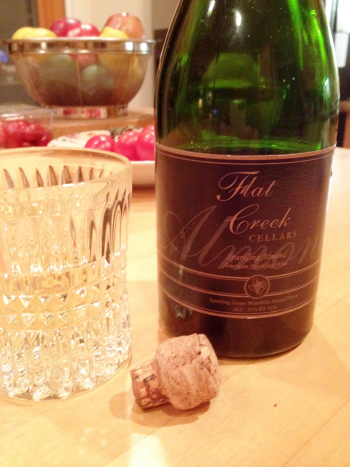 Most folks will ring in the new year by raising a glass. For many, it will be an adult beverage.

For us, it's the local sparkling almond wine shown there at left.

Traditional or more extravagant celebrants, however, will ring out 2017 and welcome 2018 with bubbly.

More tax sparkle: The toasting with champagne will have extra meaning this year for the makers and importers of the fancy sparkling wine.

Not only will they be celebrating more year-end sales, they'll be reveling in a significant reduction in 2018 taxes on their product.

Effective Jan. 1, 2018, with the implementation of the new Republican tax law, the federal champagne excise tax will drop from $3.40 per wine gallon to just $1.07 per wine gallon.

Beyond bubbly: But folks with champagne connections aren't the only adult beverage makers who will benefit from the coming tax law change, which technically is a credit against the wine excise tax.

In addition to lowering the tax rates, the new law also ends the production limitation, making the tax credit available for all wine producers and importers.

And the Craft Beverage Modernization and Tax Reform portion of the law also reduces the excise tax on barrels of beer, whether brewed or imported.

But wait, there's more. Excise taxes are cut on some distilled spirits, too.

A round for everyone! Such inclusiveness is sort of a holiday season tax miracle.

"I've been in the industry for 42 years, and this is the first time that I have seen the alcohol beverage world come together — beer, wine and spirits," Margie Healy, spokeswoman for the Guerneville, California-based F. Korbel and Bros., told the San Francisco Chronicle.

"Everybody is supportive of this and everybody is going to see some benefit, and that's kind of exciting," she said.

Consumer cost effect: Whether it will be exciting for consumers, however, remains to be seen.

With less excise taxes to pay, will beverage makers and importers cut the prices that their customers pay next year for bottles beer, wine and whiskey?

I wouldn't count on it. The potent potables industry is likely to take the savings and put them back into their companies. That's just how business works.

But maybe the prices at least won't increase.

And to that possibility, we all can raise a glass tonight and in the New Year.