Trump has filed his 2016 taxes, or so it seems from remarks by former IRS commissioner 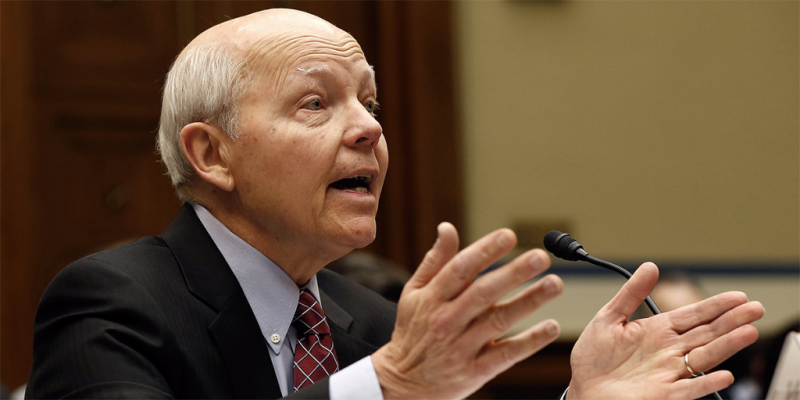 John Koskinen's days of giving formal testimony as head of the IRS ended when his commissioner term concluded earlier this month. However, an interview he gave the week after leaving the tax agency post has raised questions about Donald Trump's tax returns and taxpayer privacy.

Remember Donald J. Trump's tax returns? Those he said during the campaign that he'd share with America as soon as the IRS completed its audit of them?

Well, we still don't know if the IRS has finished examining those prior year filings, but apparently Trump did sometime this year file his 2016 taxes. The Administration confirmed this summer that Trump had filed for an extension.

Again, we don't know for sure that 45's 2016 forms are finished and filed since, unlike previous presidents in recent years decades, Trump hasn't made public his first official tax filing since moving into the White House. Neither, by the way, has Vice President Mike Pence, although prior veeps also have done so.

Trump's taxes done? However, thanks to a recent interview with Politico Magazine, former IRS Commissioner John Koskinen seemed to imply that the agency has Trump's most recent tax year filing.

In the Nov. 15 article, published just a few days after Koskinen's term ended, Politico reporter Michael Grunwald noted that Koskinen has "never looked up Trump's tax returns — legally, he can't, and neither can any other IRS employee who isn't working on them — and says the agency not only keeps them in a locked cabinet in a locked room, but is replacing the cabinet with a safe."

Later in the transcript-style story, Grunwald and Koskinen had this exchange:

Grunwald: You know I've got to ask: Are his taxes really being audited?

Koskinen: I can't tell you anything about anyone's taxes, so you'll have to go with whatever he says.

Grunwald: You're not going to give up his return?

Koskinen: It's in a locked cabinet in a locked room that nobody's in. You'll need a key to the room and the cabinet to get it. We're in the process of turning that cabinet into a safe. We keep all the returns from every president in there.

Grunwald: So have you looked at his return?

Koskinen: I had no authority to look at anybody's returns. Nobody can, unless you're authorized for the process of examination. I couldn't look at my own return. Anyone who looks at anyone's return is subject to termination. We take this stuff seriously. Everyone's aware of the history of the Nixon enemies list. No individual employee can even select a return for audit; we get automated referrals, and they go straight to a committee. But people need to be confident in that. Even with our limited resources, we'll do a million audits this year. It's so important that people don't feel like they're getting audited because they said something or gave to a certain organization.

Did Koskinen cross the tax privacy line? That discussion of Trump's taxes has tax world tongues wagging. Specifically, there's concern that the outgoing head of the IRS violated the commander-in-chief's tax privacy.

Specifically, Koskinen may have broken tax information privacy law when he revealed during the Politico interview that Trump had filed his tax returns and that they are secured at agency headquarters, wrote Tax Analysts reporter William Hoffman.

One take is that a vague, general reference to a president's (or anyone's) tax returns would not break the law.

However, the counter argument is that the sanctity of a taxpayer's return grants broad interpretation as to just what is considered return information.

Karen Hawkins, former director of the IRS Office of Professional Responsibility, told Tax Analysts that while Koskinen may have violated the non-disclose provisions of the tax code, she characterized the former commissioner's remarks as an "inadvertent, unintentional, harmless" effort to reassure taxpayers generally and the president in particular that their return information is secure.

"It's clear in context that the commissioner was seeking to reassure, not to do harm," Hawkins said, adding that civil or criminal prosecution "would be ill-advised."

Former commish clarifies his comments: Koskinen himself made that same argument in response to questions about his apparent tax privacy faux pas.

"I did not mean to disclose any information, and everybody, I think, assumes the president filed his return, and I was talking about where all the presidents' returns were kept," Koskinen told Tax Analysts. "If it's a violation of 6103, it clearly was inadvertent. From the president's standpoint, it probably doesn't hurt him that everybody knows he does file his returns."

One of the options if Trump believes that Koskinen did violate his taxpayer privacy is to file a lawsuit. We all know how much Trump loves legal actions.

However, according to the tax lawyers who spoke with Tax Analysts, the legal action would have to be against the United States, but not against Koskinen himself.

Regardless of what happens or how the tax privacy law is interpreted, it looks like while Koskinen's tenure at the embattled IRS will end just like it began, with a controversy.