Which bracket will you be in under the GOP tax reform plan? 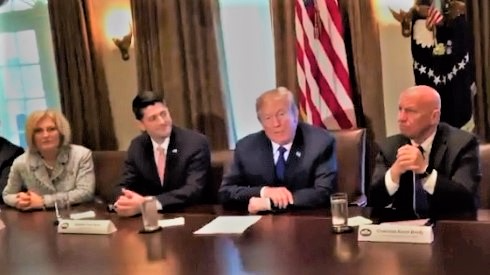 Before heading out on an Asian trip, the president met with House GOP members to talk tax reform. Among those at the plan briefing were, from left, Ways and Means Committee member Rep. Diane Black of Tennessee, House Speaker Paul Ryan of Wisconsin and W&M Chair Rep. Kevin Brady of Texas. (Photo courtesy Donald J. Trump Twitter account)

The shiniest part of the Republicans' new tax plan is the reduction in tax rates. We would go from the current seven to just four.

So how much of our earnings will fall into these new brackets?

The plan says that for single parents filing as a head of a household, the bracket thresholds would be the midpoint between the thresholds for unmarried taxpayers and married couples filing jointly, which would be up to $67,500 in the 12 percent tax bracket. Heads of households who hit the top 39.6-percent bracket would see a threshold of $500,000.

And here's what we'd pay in 2018 if the current system stays:

Seems simpler, but…: I'll give the Republicans this, four tax rates and income brackets instead of seven sure looks simpler.

But that bump from 10 percent to 12 percent for the lowest rate doesn't look like a tax break. The GOP says the nearly double standard deduction amount will take care of that.

Families with lots of kids and other dependents, the proposed new flexibility credit notwithstanding, are not so sure as they look at the loss of all those current tax exemptions.

Plus, when you look at the change to the corporate tax rate, which is the raison d'être for this round of tax reform, the optics aren't so good.

While the lowest individual income earners see a 2 percentage point tax increase, major corporations — many of whom are doing just fine tax-wise already — will see their taxes drop from 35 percent to 20 percent.

That lower business rate, according to Republican tax writers, will be permanent. Some individual tax breaks, however, will disappear in a few years, such as the aforementioned family tax credit that's being touted as a way to cover those missing personal exemptions.

And some of the deductions that will be axed could be costly for many filers. Yes, I'm looking at the loss of the property and casualty write-offs.

You really thought it was a good idea to kill this tax break as so many people in Houston and the Texas Gulf Coast, Florida, Georgia, Louisiana, South Carolina, Puerto Rico and the U.S. Virgin Islands are still struggling in the wake of deadly Hurricanes Harvey, Irma and Maria?

Again, not a good look, guys.

Some folks, like the hubby and me, appear to be among those who, House Majority Leader Kevin McCarthy (R-California) acknowledged on Fox News, probably will pay more.

If there are a lot of folks in the more-tax boat with me and the hubby, that could be disastrous for the plan.

If, however, the inevitable calculators that I expect to appear on tax and political think tank sites any day now indicate that wealthier taxpayers will pay more, that could help attract some lawmakers, mostly Democrats, who now are dead-set against the bill.

Meanwhile, across Capitol Hill: Plus, while we're all fixating on the House measure, Senate Republicans are working on their own tax bill.

Yes, all tax legislation must, by constitutional decree, originate in the House, but the Senate has never been shy about mixing it up on taxes.

And the mixing could get messy as lawmakers must come up with ways to resolve the budgetary issues — specifically, the almost $1.5 trillion that the House bill will cost in its first decade, with more deficit growth projected beyond then — that could doom the bill in the upper chamber.

"As I have made clear from the beginning of this debate, it is my hope that the final legislation — while allowing for current policy assumptions and reasonable dynamic scoring — will not add to the deficit, sets rates that are permanent in nature and closes a minimum of $4 trillion in loopholes and special interest deductions," said Sen. Bob Corker (R-Tennessee).

Sharpen your pencils and make sure you have enough batteries for the calculator. It's going to be fun numbers crunching time.

Updated, Nov. 5: This post has been corrected to note that the head of household filing status will remain in the GOP House tax reform plan and revised to add a link to more on the in-the-works Senate tax proposal.

The Head of Household standard deduction amounts are $18,000 under the Senate version and $18,300 under the original House version. The conference committee will have to choose one or come up with an acceptable compromise.

What about the standard deduction for HOH? Will it be higher than Single but lower than MFJ, as it is now?

My bad. Thanks for pointing this out. Copy corrected.

You wrote "Under the GOP plan there would be no head of household, surviving spouse or married filing separately option."

Per Ways and Means Committee Majority Tax Staff "For single parents filing as a head of a household, the bracket thresholds would be the midpoint between the thresholds for unmarried individuals and married taxpayers filing jointly, except that the 39.6-percent bracket threshold for heads of household would be $500,000."