November tax moves to make you, not the IRS, thankful

UPDATE, Nov. 2: Good news. It looks like most of the Republican tax reform plan, according to the bill's legislative language, "shall apply to taxable years beginning after December 31, 2017." That means we will close out 2017 under current tax law, so these tips still apply. I'm working on a post about the proposed tax changes and will get it up here on the ol' blog shortly. it's now published! 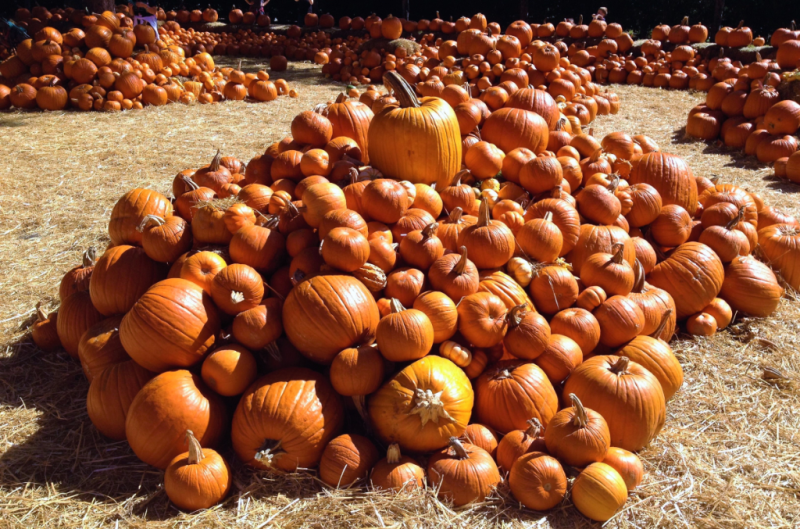 My mind boggles at the number of Thanksgiving pumpkin pies that can be made from this collection! It's just a small part of the Dallas Arboretum and Botanical Garden's 2017 pumpkin patch. (Photo by Kay Bell)

Hello, November. You're a welcome month, as you bring us cooler weather, Thanksgiving goodies (yay pumpkin pies!) and some time to make year-end tax moves.

In fact, we get even more time, an extra hour this month thanks to the end of Daylight Savings Time and rolling back our clocks 60 minutes on Nov. 5. It's not a lot of time, but every minute counts when it comes to taxes.

Most of us agree that a simpler, more accessible tax code would be better. Most of us also would love to pay fewer and less taxes. And those are the ostensible goals of the Republican tax-writers.

I am concerned, however, with the GOP's decision to keep Democrats out of the process. Every person of every political persuasion has to deal with the Internal Revenue Service at some point.

The speed at which they plan to rewrite the tax code also is worrisome. I'm seeing lots of unintended, and likely bad, tax consequences coming out of this debacle debate.

That said, we're here now. So let's focus on what the current Internal Revenue Code says, how we can make its provisions work for us and our 2017 taxes and hope Congress doesn't screw up our tax planning.

I know, that's a huge hope! But let's forge ahead with some November Tax Moves.

Take care of your health and health care: It's open season again for Affordable Care Act, aka Obamacare, enrollment. Yes, it's still the law and the IRS says until it's repealed and replaced, it will enforce the minimum essential coverage reporting rule.

Without coverage for the full year, you'll owe a tax penalty. The advance premium tax credit, however, could help you pay your policy's cost.

If you get your health insurance at work, you're fine. You also might be able to take advantage of a medical flexible spending account, or FSA. If you do, you need to start looking now at how to spend down that tax-favored account.

Yes, some bosses allow FSA owners to roll over up to $500 into next year's account. Other offer a grace period until March 15 of the next year for the prior year's FSA money to be spent. But just in case you must use or lose your FSA money by Dec. 31, plan your medical treatments now so you don't face end-of-year panic spending.

And if you're planning to deduct medical expenses on your Schedule A, remember that the threshold is now 10 percent of adjusted gross income for everyone, regardless of age.

In that case, look at deductible medical expenses and treatments you can take care of in these last two months of the year so you can claim them on your 2017 taxes.

Decide about deductions: Speaking of deductions, now is a good time to look at whether you want to itemize or claim the standard deduction.

Your decision could change, of course, depending on Congressional tax reform. Still, it's always a good idea to look at your options early.

Most people take the standard route, especially since those deduction amounts typically are bumped up a bit each year thanks to inflation. But if you think you'll itemize, consider bunching your expenses now.

Bunching is a tax planning strategy that lets you shift deductible expense into the tax year where they'll be more valuable. Moves range from scheduling aforementioned medical treatments to simply renewing a work-related subscription or membership if those costs will be worth more in 2017.

If, however, you find they won't do you any tax good — and the medical procedure isn't time critical — you can push them into the coming 2018 tax year. It's much easier to make these choices now, and start collecting the receipts, with 60 days left than to scramble at the end of the tax year.

Assess your assets: It's always wise to look over your portfolio periodically. The end of the year is an obvious reassessment period.

But getting a head start can be wise. With Thanksgiving on the way and Christmas and other December holidays on Turkey Day's tailfeathers, you don't want to be rushed as you analyze which assets to keep and which to dump.

You will, however, owe capital gains tax, so remember to also look at selling some losers. Those less-than-stellar investments can offset your gains and the taxes you would owe. And if you have more losses than gains, you can use up to $3,000 to claim again your ordinary income.

You also might want to look at donating appreciated stock to your favorite charity rather than selling it. You'll get the charitable tax deduction without having to pay tax on the gains and the charity gets a nice gift.

More moves to make: These are just a few suggested tax actions to take this month. You can find more in today's #TaxBuzzChat where several of my tax-oriented Twitter pals and I discussed actions to take now and by Dec. 31.

And you can find more November Tax Moves in the ol' blog's right column, under the bright red heading of the same name, just below the countdown clock ticking off the time left here in tax year 2017.

Check them out and take advantage of those the ones that fit your financial and tax situations. That way you'll have a few more things to be thankful for on Nov. 23.