Home Table of Contents Tax Tips Credits Deductions Refunds State Taxes Politics/Laws Tax Terms Archives
November tax moves to make you, not the IRS, thankful
Which bracket will you be in under the GOP tax reform plan?

How the GOP tax reform plan could affect you (and me!) 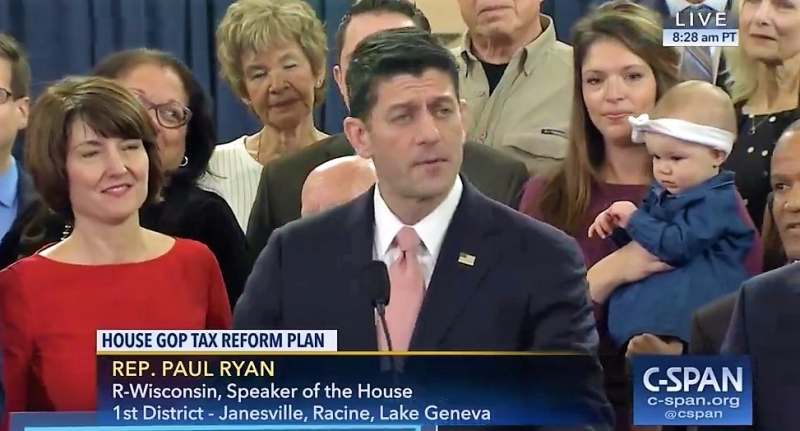 House Speaker Paul Ryan (R-Wisconsin) get serious in discussing what Republicans say are the middle-class benefits in their latest proposal to rewrite the tax code. The most detailed plan yet was released Thursday, Nov. 2. (Screenshot of C-SPAN video; click image to watch clip.)

Remember that Capitol Hill adage that all politics is local? It can be easily shifted to tax reform.

Whether you're for or against a tax law change will depend in large part on how much it helps or hurt you. When it comes to the men and women who propose and/or make those changes, their votes will depend, in part, on how many of their voting constituents are helped or hurt. (And the K Street lobbyists' thoughts, but that's for another post.)

In announcing their bill today, a day later than they had planned, Republican leaders touted its savings for the mythical middle class.

The key number cited during the bill release press conference was $1,182. That's how much money average American families (again, whatever that is) will save under H.R. 1, which is officially titled the Tax Cuts and Jobs Act. Yes, they rejected Donald J. Trump's suggested Cut Cut Cut Act name. Sad.

Just how that $1,182 is achieved supposedly is detailed in the bill's 429 pages. Here are the highlights.

The GOP says an effective fifth bracket of 0 percent is created in the form of the enhanced standard deduction.

Those deductions, which now are based on which of the five filing statuses you fall into, would be increased to $24,000 for joint filers and surviving spouses and $12,000 for individual filers. Single filers with at least one qualifying child could claim a standard deduction of $18,000.

Yep, you read right. The bill collapses the current filing status choices for deduction purposes into basically two, with the head of household option notably gone.

Personal exemptions, which for 2017 is $4,050 per taxpayer, spouse and qualifying dependents would be eliminated. Don't freak, says the GOP. The personal exemption for the taxpayer and taxpayer's spouse is consolidated into the larger standard deduction, as is currently the case for 1040-EZ filers.

But what about the taxpayers' dependents and their exemptions? The current personal exemption for children and dependents are consolidated into an expanded child tax credit and a new family tax credit.

The child tax credit would go from the existing $1,000 per child younger than 17 to $1,600. H.R. 1 also calls for a tax credit of $300 for non-child dependents, such as an elderly parent who relies on the taxpayer's support.

Most itemized and above-the-line deductions would be repealed. That means no more medical expenses or miscellaneous costs such as tax preparation fees or job hunting costs on Schedule A; gone as income adjustments are the student loan interest and moving expenses.

The deductions that would remain are:

Also gone are the credit for individuals older than 65 or who have retired on disability, the adoption credit, the tax credit associated with mortgage credit certificates, and the credit for plug-in electric drive motor vehicles.

And the dreaded Alternative Minimum Tax (AMT) would be eliminated. This is one of the few provisions that's likely to have bipartisan support, as both Democratic and Republican members of Congress have hated this parallel income tax as much as individuals who must pay it.

The estate tax, usually referred to as the death tax by its opponents, would be gone by 2025. Until then, the exemption amount for estates will double to $11 million per person. That's almost double the current $5.49 million, which is slated due to inflation adjustments to go to $5.65 million in 2018.

Remaining untouched (for now) are workplace tax-deferred retirement plans, commonly known as 401(k) plans. This a relief to many of the account holders who were worried when lawmakers floated the idea of limiting 401(k) contributions or changing the tax-deferred plans to Roth accounts.

Also, Affordable Care Act taxes and enrollment/tax reporting/tax penalty requirements remain in place. Given the trouble the GOP-controlled House and Senate had in trying to repeal and replace Obamacare, there's no way they wanted to muck up tax reform with related health care provisions.

The application process for some refundable tax credits popular with middle- and lower-income taxpayer credits — refundable portion of the child tax credit, the American Opportunity Tax Credit (AOTC) to help pay for college and the Earned Income Tax Credit (EITC) — would be tightened in an effort to reduce the dreaded waste, fraud and abuse.

Timing tax break: Going back to our starting point of all taxes are personal, how much of these changes will affect you and to what extent.

I was relieved after glancing through the 429 pages of the bill and the accompanying section-by-section summary to see that most of the changes would not be retroactive. Most of them, per the legislative language, "shall apply to taxable years beginning after December 31, 2017."

That means we will close out 2017 under current tax law (and the tips I offered in yesterday's November Tax Moves item remain in place). I, my fellow taxpayers who've already made tax moves (and written blog posts) anticipating existing law to be in effect and the Internal Revenue Service thank you!

It also means that I'll get to use the medical expenses deduction and full value of my property and Texas state and local sales taxes before they possibly are cut from the Internal Revenue Code.

Compare and contrast: Then I pulled out my 2016 tax return. Judging from those numbers compared to the Tax Cuts and Jobs Act, the hubby and I, who consider ourselves middle-class, will be paying more.

Last tax year, our effective tax rate was 21.75 percent. Under the Republican plan we'll be in the 25 percent tax bracket.

That will come down a bit once we calculate the taxes on income that's from capital gains, since those rates will remain at 15 percent for us and most other non-wealthy filers.

But the loss of state and local sales taxes and all our home's real estate taxes — yes, our property taxes in Texas are horrible, especially in urban areas where home values have grown, since we don't have a personal income tax — will cost us.

Right now, it looks like we won't pay a lot more, but contrary to White House and Republican leaders' promises, we consider ourselves middle class and we won't be seeing anywhere near that $1,182 in tax savings.

Of course, the plan released today could change yet again. But I suggest you pull out your most recent tax return, look at tax breaks you took then and see if they're in the proposed Tax Cuts and Jobs Act.

Make your tax situation known: Then let your Representative and two Senators know what you think of it.

If you're unsure who that is or how to reach them, both chambers have online tools to help you. Check out House's Find Your Representative online tool and the Senate's directory that you can sort by state.

I've already sent messages to my members of Congress.

And in the coming days I'll be looking more closely at some of the key provisions in H.R. 1 as it wends its way through Congress.

Tax reform? What a joke. It should be spender reform because as long as the spenders also have the purse strings nothing will ever change!!!

Thanks for the, as always, comprehensive wrap up! I'm going to have to find a couple hours to compare our taxes against these possible changes and figure out how much it's going to cost us :/ I have to wonder how likely it is that this one will pass.