One of the surprise differences in the Senate tax plan as compared to the House bill is in the treatment of state and local taxes, referred to by tax geeks (guilty!) as SALT.

Both the House and Senate tax bills would eliminate the deductions for state and local income and sales taxes.

The Senate, however, makes no accommodation for real estate taxes.

That hard tax line also was originally taken by the House. But GOP leaders there, facing backlash from their members in districts where voters pay big real estate tax bills, acquiesced.

The House bill revision allows the property tax deduction to remain in H.R. 1, the Tax Cuts and Jobs Act, but only up to $10,000.

One reason is that the dollars from killing the SALT deductions would offset other tax cuts. The SALT savings would come to around $100 billion in 2017, according to projections from the Joint Committee on Taxation.

The states that appear to be hurt the most by getting rid of all SALT deductions have two Democratic U.S. Senators. Notably, that's California, New Jersey and New York.

The Republican leadership isn't so worried, at least right now, about what their colleagues and their constituents from the other side of the aisle think.

However, in the House, there are some Republican-held districts that would be hurt by full-scale SALT deduction elimination.

The House's big fear is that affected taxpayers would transfer their property tax pain on election day to Republican Representatives who let that happen, voting them out of office and endangering the party's hold on the House.

SALT in Red State tax wounds, too: However, a closer look at precisely which states would be hurt most by killing all SALT deductions puts the politics in a different perspective.

The Pew Charitable Trusts has created an interactive U.S. map where you can see the percentage of filers in your state who claim the deduction and the average amount they take.

Nationally in 2015, almost 30 percent of U.S. taxpayers claimed itemized deductions, with the per-claimant average coming to $28,173. The recent debate on the proposed tax reform SALT changes highlights, however, that taxpayers in some states get more than the average deductions.

Almost 46 percent of Maryland residents, for example, claimed SALT deductions on their 2015 federal returns, with the $28,501 per-claimant average slightly more than the national average.

No income tax, but still plenty to deduct: The hubby and I lived many years in the Old Line State, with its property taxes and state and local income taxes, and I, as the spouse who took the lead on filing tax returns, remember well the importance of this federal tax deduction.

After our years as Marylanders, the hubby and I moved to Florida for a while and then back home to Texas, two states with no income taxes. But because of those states' income tax policy positions, local jurisdictions in the Sunshine and Lone Star States rely heavily on sales and property taxes.

As Floridians and Texans, we kept filing Schedule A, primarily because we owned homes in those places that offered us deductible expenses. Plus, the option to deduct sales tax amounts helped, too.

But because no income tax, we should have had substantially lower itemized amounts, right? Wrong.

Here in Texas for the last dozen years, we've seen the same, as tallied by Pew researchers. The per-claimant itemized deduction amount for Lone Star Staters in 2015 was $26,071. That's less than the national and Florida average, but still a lot when you consider there's no income tax in Tejas.

I'm betting that more recent data would reflect higher real estate values, at least here in Texas, which are used as the basis for property tax assessments.

And those Florida and Texas amounts are more than the increased standard deductions that GOP tax writers say would make up for the lost itemized deductions. Tell that to the Travis County tax assessor-collector, please!

Spreading the tax change pain: Basically, what the Pew map and my personal experience shows is that the federal deduction for state and local taxes would cost folks not just in tax-heavy Blue States like California, New Jersey and New York, but also in states that are reliably Red (Texas) or which periodically toggle that way (Florida).

That broader than expected pain from lost tax deductions also is underscored in a September analysis by the Rockefeller Institute of Government.

In that report, the think tank at the State University of New York, notes that "some states 'receive' far more federal spending than their residents or economies pay through taxes, while others 'give' far more than they get."

That some states are subsidizing others is an argument that's being made by both opponents and supporters of the existing SALT deductions. But the Rockefeller Institute data shows that it's not always in the way you might think. 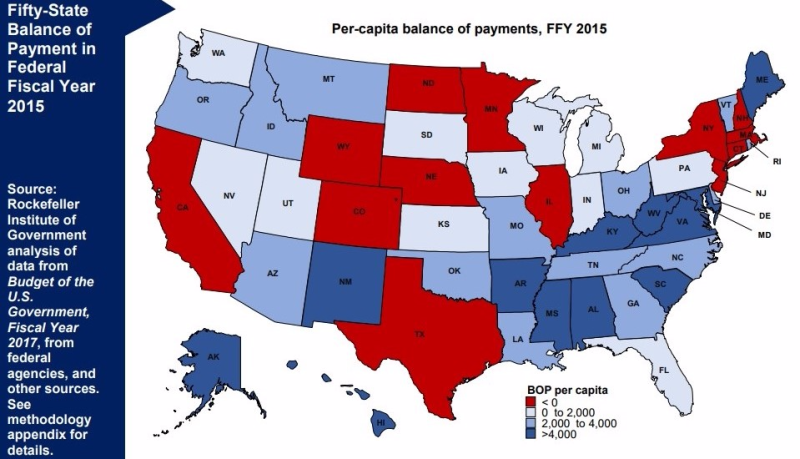 Those 13 states that are the net givers earn this week's By the Numbers honor.

Net givers get tax deductions, for now: A closer look, however, shows an interesting tax and political point.

Of those 13 states where residents paid more in federal taxes than they received in federal spending, the usual suspects include high-tax and politically Blue states of California, Illinois, New Jersey and New York.

But some reliably Republican states (Nebraska, Wyoming and the very scarlet Texas) also are on the net givers list.

Also, notes FactCheck.org, five of the six states whose residents claim more than half of the SALT deduction benefits — New York, California, New Jersey, Illinois and Texas — are on that list.

No-income-tax Texas makes the list largely due to the property tax deduction that the state's two GOP Senators say, so far, they want to eliminate.