Black Friday shopping for tax breaks … for the final time? 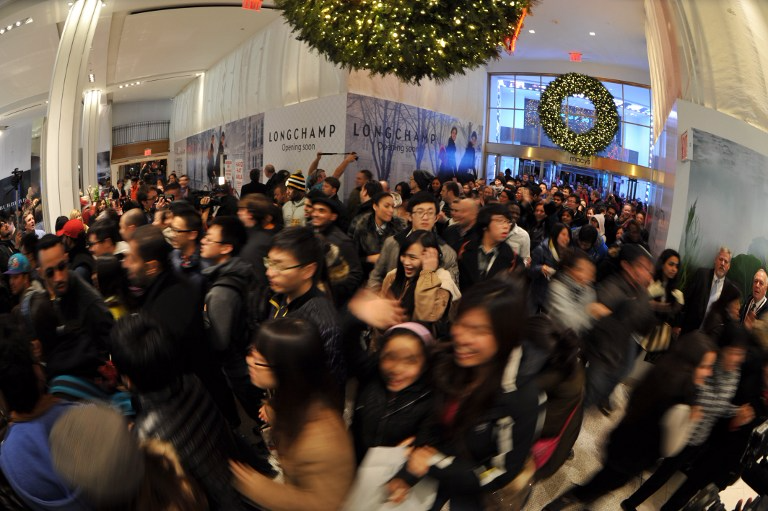 A crush of shoppers rushes to start their Black Friday quest for bargains. (Photo via Diariocritico de Venezuela/Stan Honda/Flickr CC)

Black Friday, the day-after-Thanksgiving kickoff to the holiday shopping season, may have lost some of its luster in recent years, but plenty of shoppers still hit the stores today to bargain hunt.

If you're among the frenzied shoppers, hang onto your receipts if you buy a lot or big-ticket items. They could bump up your itemized tax deduction.

And your 2017 tax return might be the last time you'll be able to take advantage of this deduction.

Tax reform deduction trimming: When Congress reconvenes after the Thanksgiving break, Senate Republican plan to bring their version of tax reform to a vote. The House already approved its bill, H.R. 1, the Tax Cuts and Jobs Act.

Both legislative chambers propose lowering tax rates. But to do so, some deductions must go. That's not unusual; such a trade-off is common to keep the cost of the tax code changes within budgetary boundaries.

This time both legislative chambers are targeting itemized deductions, specifically state and local taxes. This covers not only the long-standing write-off on Schedule A for state and local income taxes, but also the amounts paid in state and local sales taxes.

The sales tax deduction was added to the Internal Revenue Code in 2004 in an effort to, as the saying goes, level the playing field for folks in the states that do not collect income taxes. This deduction is a no-brainer for folks in Alaska, Florida, Nevada, South Dakota, Texas, Washington and Wyoming, all states that don't have any type of personal income tax.

The sales tax deduction also is probably the better choice for many New Hampshire and Tennessee residents. Taxpayers in those two states state tax only on their interest and dividend income. (Tennessee is phasing out this tax.)

But even in some states with low income taxes, the sales tax deduction is a better tax-saving move.

Permanent tax break again impermanent: Since its addition to the tax code, the state and local tax deduction technically was only a temporary measure, part of what is known as the extenders that must be periodically renewed by Congress. However, the sales tax deduction became a permanent tax break as part of the Protecting Americans from Tax Hikes, or PATH, Act of 2015.

Since the combined state and local tax deductions — which covers not only income and sales taxes, but also property taxes — are among the largest amounts in the tax code, they because easy targets for tax trimming lawmakers.

Plus, the state and local taxes, referred to as the acronym SALT by tax geeks, are claimed by less than a third of taxpayers. And that group of itemizers is disproportionately wealthy, with around 80 percent of the value of the deduction going to those in the upper income brackets.

The House's tax reform bill does away most SALT deductions, only keeping a deduction of up to $10,000 in property taxes. The Senate eliminates SALT completely from its tax diet.

The good news for SALT taxpayers is that any change in the deduction won't take effect until, at the earliest, the 2018 tax year. So if you claim any of these taxes, your 2017 filing could be your last opportunity to do so.

And holiday purchases, starting with today's Black Friday buys, could be your last best chance to collect deductible sales taxes.

Tax tables make it easier: Most taxpayers who claim the sales tax deduction use the tables that the IRS provides for each state. These show the average amounts for each state that its residents pay in state sales taxes.

You have to do a little more filing work to add in any local sales taxes you pay. Here in Austin, that's a 2 percentage point addition to Texas' 6.25 percent sales tax.

You'll find the tables at the back of the Schedule A instructions. Or you can use the IRS' online sales tax deduction calculator to get an idea of your deduction amount.

The IRS has a worksheet to help us figure our deductible local tax amounts. Most filers let their tax software figure this added deduction claim.

Big ticket deductions: There's also the option to add to the average amount in the table any sales taxes paid on big-ticket items.

You can add these amounts right on top of the sales tax table figure that you claim. They include sales taxes paid on:

Since these are things most of us don't buy every year, the IRS doesn't include them in calculating the average annual amount in the sales tax tables.

But when you do buy them (at least under current, unreformed tax law), you can account for the added sales tax on these occasional large expenditures in addition to the tables.

So be sure to hold onto to those big ticket receipts.

Retailers rely on Black Friday+ sales: Other things that consumers if not the IRS consider big ticket items are among the purchases made by many over the holidays.

And retailers in those sectors are very thankful for these customers since the shops rely heavily on seasonal sales.

Say you're finally answering the question that his or her family has been asking, at least among themselves, about your intentions toward your significant other. The diamond ring you buy now to pop the question over the holidays could have a hefty sales tax attached.

Similarly, if your sales-tax deductible home re-do added a game room, you could end up with a hefty sales tax bill on the video games and electronics you buy now to fill up the home addition.

Those are two of the industry areas where retailers count on holiday sales to make their business year successful, according to data from Statista.

Collect, recover receipts: Note, however, that the engagement ring and roomful of electronics — and things bought in the areas featured in the graph above — are NOT part of the IRS-approved big-ticket add-ons to the sales tax tables.

You can't just tack those amounts onto the already IRS-computed sales tax table amounts. That option is limited to the areas (vehicles, home renovations, etc.) noted earlier in this post.

That means that if you are buying other expensive items and you want to include their state and local sales taxes as part of your overall itemized deduction claims, you're going to have to dig up or reconstruct the sales taxes you paid on everything else in 2017 to get an accurate account of how much you paid.

The extra receipt work might be worth it, though, if the sales taxes on your holiday-shopping season purchased goods, when combined with your other run-of-the-meal sales taxes throughout the year, come to more than the amount in the sales tax tables.