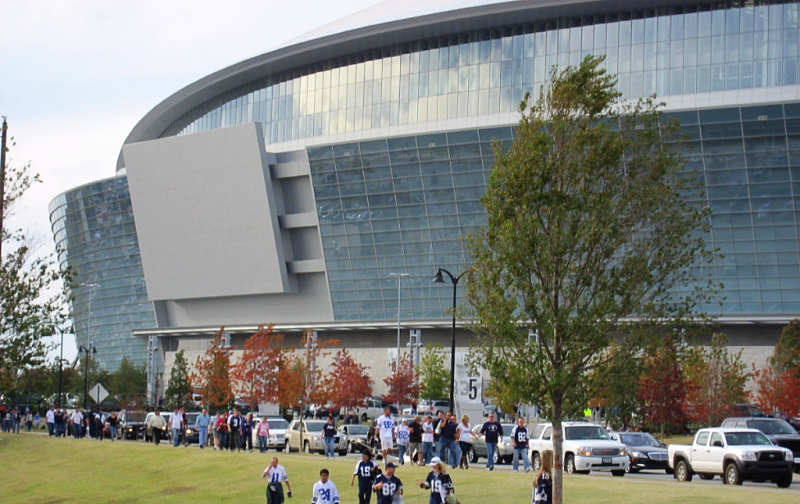 AT&T Stadium, originally known as Cowboys Stadium when it opened its doors in 2009 and forever known as Jerry's World regardless of which company buys naming rights, is home to America's Team. It also hosts college football's Cotton Bowl game, as well as a variety of other sports and entertainment activities. NFL team owner Jerry Jones footed most of the billion-dollar stadium's cost, but Arlington voters approved an increase of the city's sales, hotel occupancy and car rental taxes to help pay for the facility. Arlington also provided millions in bonds to help Jones cover any cost overruns. (Photo by Kay Bell)

The lingering controversy over players' protests during the national anthem has now diverged into the tax world.

The matter of taxes and professional sports got widespread attention when the president broached the subject in, of course, a Twitter post. But some members of Congress beat the prez to the punch, introducing legislation on public funds for sports facilities before Trump logged onto his smartphone this week.

The initial consensus was that Trump was unaware that the National Football League surrendered its tax-exempt operating status years ago.

Tax stats not worth the hassle: After being slammed repeatedly over the years for the favorable tax status, the league's powers that be decided the adverse PR of the United States' most popular — and wealthy — professional sports league being a 501(c)(6) organization under the tax code was not worth the hassle.

On April 28, 2015, the NFL announced it would officially change the league's tax status to that of a taxable entity.

The 501(c)(6) status is one of [too] many nonprofit statuses allowed under the Internal Revenue Code. The one formerly used by the NFL is for business leagues, which still includes the National Hockey League (NHL) and Professional Golfers Association (PGA), as well as for chambers of commerce and real estate boards.

One of the biggest drawbacks of being a tax-exempt group is that salaries of employees must be disclosed. For the NFL, that meant revealing just how much money its very well-paid commissioner makes.

The NFL change in operating status essentially was cosmetic.

While the league itself was tax-exempt, all its member football teams were not. Plus, players pay taxes on their big bucks, including convoluted and costly jock taxes to the various states and cities in which they play games, both regular season and playoffs leading to the Super Bowl.

Taxpayer-paid stadia: The next best tax break to which Trump might have been referring is the tendency for states and cities to underwrite the building of stadiums.

The latest example is the $750 million Las Vegas and Clark County taxpayers, not to mention visitors to Sin City, will shell to build a stadium in the Nevada desert for the Oakland Raiders.

That's the largest amount of public money spent on an NFL stadium. However, taxpayer dollars accounted for a higher percentage in the construction of venues for the Indianapolis Colts, Cincinnati Bengals and Cleveland Browns, all of which are close in size to Las Vegas.

Such taxpayer subsidies, of course, are not unique to professional football. Michael Farren, in a piece for U.S. News and World Report this summer, noted:

Between 1990 and 2010, 84 new facilities were built for the 122 teams playing in the four largest professional sports leagues. The combined construction cost was $34 billion, with $20 billion coming from public funding. Furthermore, 36 of the 45 new facilities built since the year 2000 were financed using municipal bonds, which are exempt from federal taxes, meaning taxpayers across the nation will contribute at least $3 billion more to subsidizing professional sports.

Those are local government tax decisions made to attract or keep sports franchises within their borders. But, as Farren pointed out, there is a federal tax connection.

Removing federal tax break for local bonds: Specifically, there are federal subsidies for professional sports stadiums and arenas that use tax-exempt state and municipal bonds to build such facilities.

A couple of members of Congress are proposing changes to that in two separate bills.

Rep. Steve Russell (R-Oklahoma) in February introduced the No Tax Subsidies for Stadiums Act (H.R. 811). It's the latest version of a bill Russell introduced in the last congressional session.

"Professional sports teams generate billions of dollars in revenue. There's no reason why we should give these multi-million-dollar businesses a federal tax break to build new stadiums," said Booker in announcing his bill's June 13 introduction. "It's not fair to finance these expensive projects on the backs of taxpayers, especially when wealthy teams end up reaping most of the benefits."

Both bills have bipartisan support.

Both bills also would, if enacted, end the use of tax-exempt bonds for stadiums.

Both bills are the latest in previously failed efforts to change this law.

That's a lot of money, especially when Congress and the White House are looking for ways to fund tax reform and tax cuts.

But even if these latest bills became law, they likely wouldn't change existing subsidies.

Lee Igel, a professor at New York University School of Professional Studies' Tisch Institute for Sports Management, Media, and Business, told Tax Analysts that existing stadium financing agreements are usually "pretty well locked up" and would have to be undone. Taking away existing subsidies, Igel said, "would take a number of legal maneuvers over time" and would likely result in lawsuits.

As for potential future tax subsidy restrictions, what are the odds of Russell's or Booker's bills making it to Trump's Oval Office desk for his signature? Right now, less than those for the struggling New York Giants to win Super Bowl LII.