Who's in the middle class will determine in large part whether that group of Americans gets Republican-promised middle class tax relief.

One of the big debates about any tax reform is whether or how much it will benefit the middle class. That was a question in today's #TaxBuzzChat about the recently released Republican framework for tax reform.

First, however, we need to decide what is and who is part of the United States middle class. There are several ways to define the middle class.

Some say it is based on income. Other define it by lifestyle. Still others say middle class is a state of mind.

Those different definitions also depend on who's using the term.

Economists, think tanks, federal agencies, politicians and the media, including me and my tax blogging colleagues who participated in today's tax reform chat, all have slightly different views on who is part of the almost mythical middle class.

Middle class dead, booming, taxed: Since middle class tax benefits will depend largely on how much money a taxpayer makes, let's go with the income definition for this blog post's purposes.

We're still waiting to see what amount of earnings will fall into which of the, for now, three proposed tax brackets. But some recent U.S. government data seems to indicate that America's middle class is far from dead. 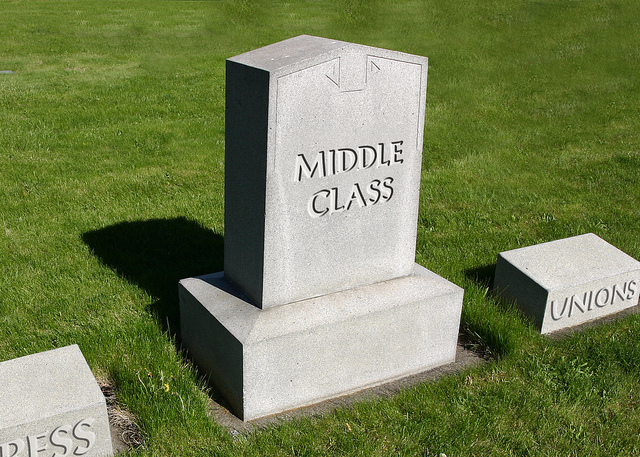 Depending on your definition of middle class and personal financial situation, you may or may not agree that the American middle-class is dead. (Photo by Donkey Hotey via Flickr)

This is the second consecutive annual increase in median household income.

It's also the highest income year on record, beating the previous high (when adjusted for inflation) of $58,655 in 1999.

Many middle classes: Since the median income means that half of Americans earn more and half earn less, then can we call $59,039 the middle class definition? Uh, no.

Why not? Because median incomes are different in different states and regions. What looks rich to some folks seems poor to those in other parts of the country.

Earlier this year, the Pew Research Center, which defines a middle class household income as two-thirds to double the national median, provided CNBC with data for all 50 states and Washington, D.C., for various household sizes.

That financial news outlet took that data and then broke it down state-by-state into how much money one-, three- and five-person families must earn to be considered middle class throughout the country.

If we still lived in Maryland, we could make a bit more and still be considered middle class:

Since it's just me and the hubby, I shaved a few dollars off the three-person household amounts. And being a tax geek, I like to look at what's taxable income.

Based on that taxable amount under current tax laws, we're solidly middle-class.

Some in our families, however, think we're rich. So it again comes down to definitions and perceptions.

These are the kind of calculations that members of Congress and their constituents are going to have to deal with in the crafting of any substantial tax reform package. Good luck to us all!

Are you a middle-class resident of your state based on CNBC's income calculations? Do you feel like those are the correct income ranges? Or do you consider yourself middle-class even if you make more or less than the ranges shown by CNBC?