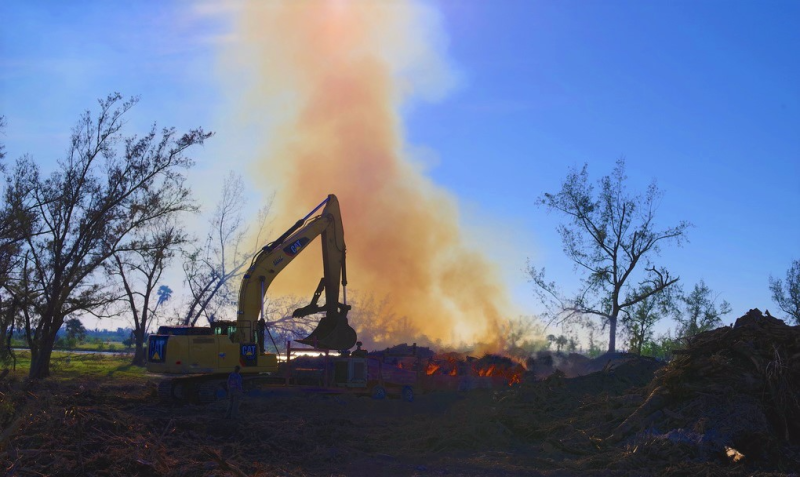 Hurricane Irma recovery work continues in Marathon Key, Florida, on Oct. 30 where storm debris is burned. Louisiana and South Carolina also were hit hard by this season's deadly hurricanes and some residents in those states are now getting tax relief, too. (Photo by Bill Koplitz/FEMA)

The worst of the 2017 hurricane system began its assault on the United States on Aug. 25 when Hurricane Harvey made landfall on the Texas Gulf Coast as a category 4 storm.

In rapid succession, the United States and it Caribbean territories also were pummeled in September by category 4 Hurricanes Irma and Maria.

The areas in those three storms' wakes are still struggling, some mightily, to recover.

Part of the assistance given residents of the storm-affected places — Texas, Florida, Georgia, Puerto Rico and the U.S. Virgin Islands — is from the Internal Revenue Service. The links here have the details for each area.

Now, similar storm-related tax relief has been expanded to Louisiana and South Carolina.

From the tax perspective, the IRS says that it will provide certain relief to people who live or have a business in the following 16 South Carolina counties:

Individuals who reside or have a business in Counties may qualify for tax relief.

Among the tax consideration given South Carolinians is a later deadline for tax due dates that fell on or after Sept. 6 when Irma made landfall and before Jan. 31, 2018.

Residents and business owners in that East Coast state now have until the last day of next January to take care of tax tasks that fell in that five and one-half month period. This includes 2017 tax returns that were on extension until Oct. 16, as well as quarterly estimated income tax payments that were due on Sept. 15 and will be due Jan. 16, 2018.

Business filings such as quarterly payroll and excise tax returns normally due on Oct. 31 are covered here. So are the automatic extensions due on Nov. 15 for tax exempt organizations that operate on a calendar year basis.

As in all disaster situations, the IRS identifies taxpayers located in the affected areas and applies automatic filing and payment relief. However, if you live or have a business outside the disaster declaration zone and believe you also should get tax relief consideration, call the IRS disaster hotline toll-free at (866) 562-5227 to make your case for similar tax relief.

Note, too, that mistakes do happen.

If you are eligible for Irma-related tax relief but get a notice from the IRS about a collection or examination matter, you should contact the tax agency and explain how the disaster impacts them so that the IRS can provide appropriate consideration to your case.

Disaster claim tax timing options: The IRS also is ready to help if you decide to take advantage of the option of claiming a major disaster's damage claims on your prior year's tax return.

This is a good move for many storm victims if it can provide you with more tax money than you would get by claiming the losses in the year they occurred. For victims of Harvey, Irma and Maria, this means claiming the losses as if they happened in 2016 rather than on your 2017 tax return to be filed next year.

The prior-year tax claim could mean additional tax refund money to help pay for repairs now instead of waiting months to claim them in 2018.

To do so, however, many taxpayers will need to file an amended 2016 tax return (unless they got an extension, which now goes to Jan. 31, 2018). If you lost your tax documents in the storm and need copies to facilitate your amended filing, the IRS will help here, too.

The agency says it will waive the usual fees and expedite requests for copies of previously filed tax returns for affected taxpayers. Taxpayers should write "South Carolina, Hurricane Irma" in red ink at the top of either Form 4506, Request for Copy of Tax Return, or Form 4506-T, Request for Transcript of Tax Return, that they file with the IRS.

Louisiana
Similar tax relief has been granted residents and business owners in the Pelican State who suffered major disaster damage from Hurricane Harvey, which moved into that state on Aug 27.

Based on the assessments by the Federal Emergency Management Agency (FEMA), the IRS if providing tax relief to those in the following 20 Louisiana parishes:

In the Louisiana cases, the IRS is giving affected taxpayers until Jan. 31, 2018, to meet certain tax responsibilities. This extra time covers deadlines falling on or after Aug. 27 and before Jan. 31, 2018.

As in the other disaster situations, this extension includes deadlines for 2016 tax returns on extension until Oct. 16; the third and fourth quarter estimated tax payments due in September and January; and, on the business side, the quarterly payroll and excise tax returns normally due on Oct. 31.

Again, as mentioned in the South Carolina announcement, the IRS will automatically note taxpayers living in the affected Louisiana parishes and grant the relief.

Again number 2, if you aren't in an official disaster declaration area and believe you should be granted tax relief, call the IRS disaster hotline toll-free at (866) 562-5227 to explain why you should get the same tax relief.

Again number 3, if you need old tax returns to file an amended return claim for disaster losses now, the IRS won't charge you for asking for those documents. You should, however, write "Louisiana, Hurricane Harvey" in red ink at the top of either Form 4506 to seek a copy of an old return or Form 4506-T to get a tax transcript that you file.

And again finally, if you are eligible for Harvey-related tax relief but get a notice from the IRS about a collection or examination matter, contact the tax agency and explain how the disaster impacts you so that the IRS can evaluate your case.

You also can peruse the ol' blogs collection of disaster tax posts at the special Storm Warnings resources page.