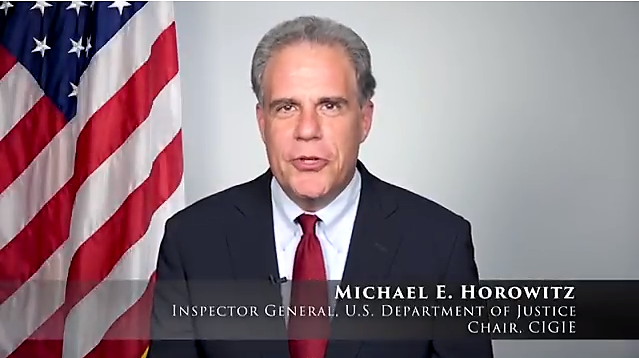 Michael Horowitz, Inspector General for the U.S. Department of Justice and Chair of the Council of the Inspectors General on Integrity and Efficiency, welcomes one and all to Oversight.gov, a new website that consolidates public reports from federal Inspectors General.

Whenever talk turns to tax reform, there also are discussions on cutting federal spending. After all, if some of us get more favorable tax treatment, the money to make up for that lost revenue must come from somewhere.

Conventional wisdom and political rhetoric tends to focus on Uncle Sam's inefficiencies, both perceived and real. If a federal agency or department isn't operating efficiently, things need to change, either by improving its procedures or cutting the money it can spend.

If only there was a simple, consolidated way to check on how a government agency is doing its job. And if only it could be used by both lawmakers who oversee the agencies and we rank-and-file taxpayers who provide much of the tax dollars that are spent on said agencies.

Well, we can stop wishing. There now is such a website and it earns this weekend's Shout Out Saturday recognition.

Online oversight open to all: Oversight.gov is a creation of the Council of Inspectors General on Integrity and Efficiency (CIGIE). It is a central online location where anyone can access thousands of reports contributed by more than 60 Inspectors General across government.

In this new single repository, the public and government officials can more easily access and search Inspector General (IG) reports, audits, and recommendations across agencies and programs. These watchdogs play a critical role in identifying and exposing waste, fraud and abuse throughout the federal government.

Those documents can give us a better look at just how those agencies and departments are doing. And that information will help us and our lawmakers determine which of Uncle Sam's many agencies need more of less of our tax dollars.

Bipartisan applause for new site: Oversight.gov's possibilities are so encouraging that the site has even brought usually feuding politicians together.

In a rare bipartisan move, the Republican and Democrat who head the House Oversight and Government Reform Committee issued a joint statement lauding the new website.

"We welcome the release of Oversight.gov," said Oversight Chairman Trey Gowdy (R-South Carolina) and Ranking Member Elijah Cummings (D-Maryland)."This site will lead to greater accountability for agencies, more savings to taxpayers, and increased transparency into the IGs' critical work in identifying and exposing waste, fraud, and abuse throughout the federal government. We thank CIGIE and the Offices of Inspectors General for their hard work in developing this website and their ongoing efforts on behalf of the American people."

OK, I know you're tired of reading about how cool Oversight.gov is. Go ahead and click on over there and see how good — or poor — a job your favorite federal agency is doing.