U.S. economy could take big hit if DACA is revoked 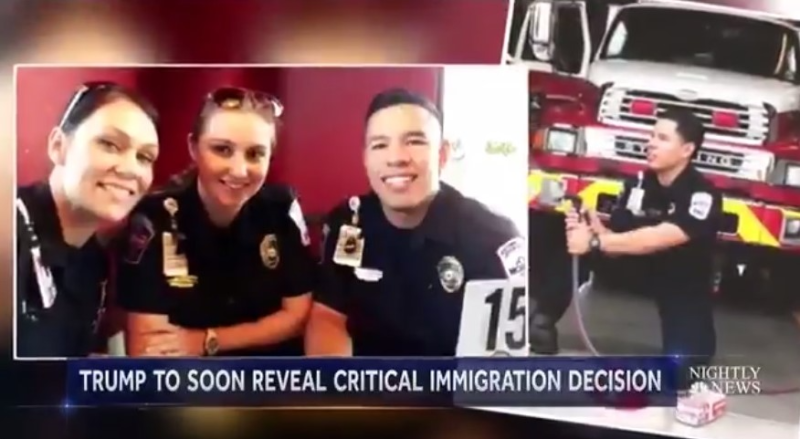 Houston paramedic Jesus Contreras, shown with some of his coworkers, was brought to the United States by his mother when he was just six. He is one of the almost 800,000 young people facing potential deportation if the Trump Administration revokes an Obama-instituted immigration leniency action. Click image to see the full NBC News report, via Twitter, on Contreras and the law.

The White House is expected to make a decision on President Obama's Deferred Action for Childhood Arrivals (DACA) program as soon as Tuesday, Sept. 5.

UPDATE, Sept. 5: It's official. DACA is ending. In a press conference this morning, Attorney General Jeff Sessions said the Trump Administration will stop considering new applications for legal status dated after today, but will allow any DACA recipients with a permit set to expire before March 5, 2018, the opportunity to apply for a two-year renewal. The White House also issued a statement saying the "orderly transition and wind-down of DACA" also provides "a window of opportunity for Congress to finally act" on at least this immigration issue.

UPDATE, Sept. 4: Word leaked over the weekend that the Trump Administration likely will end DACA, but include a six-month enforcement delay so that Congress can act on legislation that could keep the young people in the only country that they have known as home. Official announcement still expected tomorrow, Sept. 5.

If Donald J. Trump revokes the program, almost 800,000 young people who, since 2012, have been granted work permits and deferral from deportation, soon could be sent to countries they have not seen since they were small children.

These so-called DREAMers, who get that moniker from the never-passed Development, Relief, and Education for Alien Minors (DREAM) Act, are hoping for a reprieve. Or for Congress or the courts to step in and at least slow their possible removal from the country they call home.

Many, Trump supporters, however, are looking for him to finally fulfill at least one of his campaign promises by, in their estimation, getting tough on immigrants who came to the United States illegally.

Financial costs of ending DACA: Putting aside the emotional vs. it's the law arguments, there are some substantial real financial reasons to let these young people remain as de facto U.S. citizens.

The immediate impact would be the loss of workers.

Over the past five years, 91 percent of DACA recipients have found gainful employment and are currently working for companies across the country, according to the report from FWD.us, a pro-immigration reform group co-founded by Facebook creator Mark Zuckerberg.

Unemployment obviously would hurt the workers, but it also would force employers to hire and train replacements. That, according to the report, will cost companies $3.4 billion in unnecessary turnover costs. It also would cut contributions to Medicare and Social Security by $24.6 billion over a decade.

For those financial and tax reasons, the potential monthly DACA job losses of 30,000 are this week's By the Numbers figure.

The DACA job losses also would affect other businesses connected to DREAMers, such as mortgage or auto loan holders, not to mention credit card companies. With no incomes, DACA individuals would default on those obligations.

That amount also could be sizable since, according to the report, almost 55 percent of DACA recipients purchased a vehicle and more than one in 10 have purchased their first homes.

CNBC also has broken out DACA economic effects on the state level.

The cable financial news channel says the 10 states hit the hardest if the DREAMers are deported would face a combined loss of almost $30 billion in annual gross domestic production (GDP). The specific state GDP hits are:

The bottom line is that while Trump might find DACA repeal a politically inviting action, it could undercut his promise to make America's economy great again.

"By every measure, DACA has been extraordinarily beneficial, allowing nearly 800,000 individuals in the United States to live, work legally, and contribute to the only country most of them have ever known," write the FWD.us report authors. "The economic benefits of this program are clear and profound, and the dire consequences of repeal would be devastating."