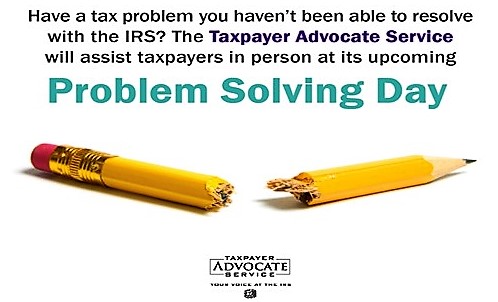 Have a problem with the Internal Revenue Service that you just can't solve?

The Taxpayer Advocate Service (TAS) might be able to help. And for some folks, that help will be in person.

Generally, TAS can assist taxpayers — at no cost — if:

Note, TAS doesn't help with routine filing matters. If you're having issues here, contact the IRS help line or website. Or find a tax pro to help with your situation.

If, however, your issues with the IRS continue to where they produce a financial threat to you or your business, contact TAS. The main office can be reached toll-fee at 877-777-4778, but sometimes face-to-face help is more reassuring.

If you live near a local TAS branch, reach out to that office.

Even if you don't live near a local office, TAS still might be able to help in a more personal way through its Problem Solving Day events.

Some of these TAS help days are in cities where it has offices. Others, however, are in locations where there is not a handy TAS branch.

At these events, TAS employees from a local office will be available to assist taxpayers and tax professionals who have power of attorney (Form 2848) on file for each case.

The upcoming Problem Solving Days are:

The links above open to PDF documents with details on the Problem Solving Day at that location.

And about those local offices, some in places recently pummeled by hurricanes are experiencing some issues.

The TAS branch in St. Petersburg, Florida, currently is closed because of the effects of Hurricane Irma.

Houston TAS offices are open for business, but the folks there ask for your patience as they work to return fully to their offices.

Remember, too, that the IRS has provided a variety of relief to those in Hurricane Harvey and Hurricane Irma major disaster zones.