GOP moves on to tax code repeal and replace 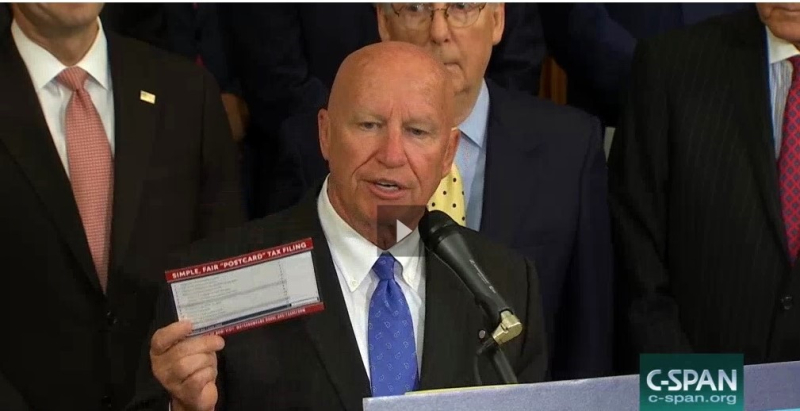 And so tax reform 2017 begins. Unfortunately, it begins vaguely.

The Republican Party today released its "Unified Framework for Fixing Our Broken Tax Code." That long title, which is in dramatic all capital letters on cover of the nine-page document, belies the amount of information it provides.

In fact, there are fewer tax details in this latest GOP framework than in Donald J. Trump's various campaign proposals or House Speaker Paul Ryan's economic proposal "A Better Way."

The GOP today is saying what it wants to do with a tax rewrite, but offering very few details about how to achieve that. Basically, it's leaving the details to Congress.

And we all know how well that's worked in recent days … and months and years.

Tax rate changes, up and down: One of the few specifics provided by the framework is the dramatic decrease in the tax rates and income brackets.

It's also one of the worse proposals when it comes to political optics.

Republicans want to go from the current seven tax rates and income brackets to three. That's good for simplicity's sake.

However, we don't have any idea how much of our earnings will fall into the three new rates of 12 percent, 25 percent and 35 percent.

See Also: I shared my thoughts on the tax rewrite framework with Miranda Marquit for her Student Loan Hero story "What Trump's Tax Reform Plan Could Mean for Your Wallet."

And about that new 12 percent lowest tax rate … .

Wait. That's 2 percentage points higher than the lowest 10 percent rate we have now. But wealthier filers are getting an almost 5 percent rate reduction by cutting the current 39.6 percent rate to 35 percent.

Not to worry, say the GOP tax plan architects. Your effective tax rate — the rate at which your earnings will be taxed after other factors are considered — will be lower.

Hmmm. OK. But you're making me do math in my head to get to that point. And you're not really giving me all the numbers I need to do that math, mentally or on paper.

Right now all I'm seeing is a proposed 12 percent tax rate instead of my current 10 percent rate. Even if my effective tax rate does go down — and I've got no guarantee that will happen right now — this till doesn't look good.

Personal, corporate starting points: So just what does the GOP tax reform framework tell us. The two tables below offer some highlights.

Touching on other tax matters: As for other tax provisions, Republicans are calling for —

Ignoring some others: And a few tax matters aren't mentioned.

There's nothing in the framework document about capital gains, which now are generally taxed at 15 percent and 20 percent rates, with some lower income earners not having to pay tax on their long-term capital gains at all.

The GOP plan also ignores the issues of carried interest. In financial circles, this is a share of the profits of an investment that are paid to the investment manager in excess of the amount that the manager contributes to the partnership. These carried interest payments, typically made to private equity and hedge fund managers, are taxed at lower capital gains rates instead of as ordinary income.

Carried interest taxation was a big deal in the last two presidential campaigns. It got much attention in the 2012 race because that's how much of then-GOP nominee Mitt Romney's money was/is taxed.

Donald J. Trump, the GOP's candidate four years later, characterized hedge fund managers as "paper pushers" who, thanks to their carried interest earnings, are "getting away with murder" by not paying their fair share of taxes.

UPDATE: On Sept. 28, White House Economic Adviser Gary Cohn said "the president remains committed to ending the carried interest deduction. As we continue to evolve on the framework, the president has made it clear to the tax writers and Congress. Carried interest is one of those loopholes that we talk about when we talk about getting rid of loopholes that affect wealthy Americans."

Wait and worry and see: I'm sure capital gains will be addressed, but not so confident about the carried interest issue. Tax rates, both at the lowest and highest levels, also might get tweaked in any congressional negotiations.

Ditto for doing away with the death estate tax. And, hope many taxpayers (including me in high property tax Travis County, Texas), so will state and local tax write-offs.

The bottom line is that while Republicans say they want to cut taxes overall by more than $5 trillion over 10 years, they are being coy on how they will pay for — or if they will pay for — those cuts. Making the numbers add up is going to be a big problem for GOP deficit hawks. Or maybe not.

It's going to be an interesting final three months of 2017 in Washington, D.C.