Getting personal with the GOP tax reform proposal

Shelley Long and Tom Hanks confront one of many (MANY) problems of homeownership in 1986's "The Money Pit." (Click image to view full MovieClips.com scene.)

How expensive is owning a home? So expensive that many homeowners view "The Money Pit" as a documentary.

But, we console ourselves, at least we get some nice tax breaks for our piece of the American Dream.

In many cases, though, the reality of buying a house is, at best, a wash economically. Some folks would be better off financially renting.

Ah, but emotionally, there's little that can beat the feeling of having your own little personal fiefdom. A man and woman's castle, as the old saying goes, is still a driving force for home buyers.

And, we remind ourselves as we sign reams of paper at closing, we get to write off the interest on those monthly mortgage payments, along with our annual real estate taxes.

An analysis by the Joint Committee on Taxation released in January shows that in tax years 2016 through 2020, taxpayer deductions for mortgage interest will keep $357 billion from the U.S. Treasury.

Tax deductions for amounts paid to state and local governments as income taxes, sales taxes and personal property taxes will cost Uncle Sam even more over those five years. That total comes to nearly $369 billion.

These Joint Tax Committee amounts are the basis for some dramatic tax code changes being proposed.

Mortgage interest's declining tax value: If Republican tax writers get their way, we'll only get half the home-related tax breaks that many folks have come to rely on when they file their federal taxes.

Among the few details in the tax reform framework the GOP released yesterday, Sept. 27, is the politicians' promise to keep the mortgage interest deduction in the Internal Revenue Code.

However, they want to do away with the property tax deduction.

For most buyers, these go hand in hand. And in some places and situations, they definitely are not equal deductions.

Home loan interest rates have been historically low, or near that low point, for years now. That's great when it comes to making monthly payments. However, it reduces the amount of interest you can deduct.

Also, if you've been in your house for a while, you've finally started paying more toward your home loan's principal rather than interest to the lender. Again, that's great. But again, that reduces the corresponding deduction's tax value.

Property taxes keep going up: One thing, though, that rarely goes down is property taxes.

In some areas, home values have been climbing since the housing bubble induced Great Recession. That's good on a visceral level. Everyone likes it when their things are seen as valuable.

But in real dollars, that increased value — or the value of homes in your immediate area that tax appraisers take into account — costs you at tax time. And even if your home's value has held steady, tax rate changes could mean you owe at least the same or a little more to the country (or parish) tax collector year after year.

So it's more than a bit infuriating for many homeowners that some members of Congress want to take away the homeownership tax break that's more valuable.

Personal tax consequences: Full disclosure, I'm speaking personally now. Timing on our Austin home's purchase meant we got one of those really low interest rates. We've been paying on it for more than a decade now, meaning the deductible interest has been steadily dropping.

But timing on our Austin home also means that we got into the local market as it started what has been a steady run up in residential property values. That's cool. It's reassuring to know that folks, even tax collectors, think our property is worth it. We hope that continues until we get ready to sell.

It's annoying, however, every tax-filing time when our property tax amount is more than our loan interest. And here in no-income-tax Texas, there's no way that local taxing jurisdictions are going to reduce their main source of revenue.

Taxes and tax breaks are personal: Our situation shows the dangers of broad brush generalizations about how the GOP's proposed tax plan will help or hurt taxpayers.

Much focus has been on taxpayers in big, high-cost states like New York and California that will pay more if the state and local taxes deduction is killed. The main reason is that those states have income taxes and lots of high-earning residents.

See Also: I shared my thoughts on the tax rewrite framework with Miranda Marquit for her Student Loan Hero story "What Trump's Tax Reform Plan Could Mean for Your Wallet."

It's also pointed out (including by me in previous posts) that many of the states that will suffer, like New York and California, are largely Democratic. But I'm in solidly red Republican Texas and I'm going to take a hit if the GOP gets its tax reform way.

So before you decide whether you're for or against the GOP tax plan, you might want to determine whether you personally will win or lose.

Mapping out your tax breaks: When it comes to the mortgage interest and state and local tax deductions, the National Association of Realtors (NAR) has created an interactive map that lets you get a look at the average amounts these tax breaks provide in your Congressional district.

The map image below gives you an idea of the places where the deductions are more important. They are in the darker shades of blue. As you can see, there's a stretch across Texas where we get more tax benefit from these home-related deductions. 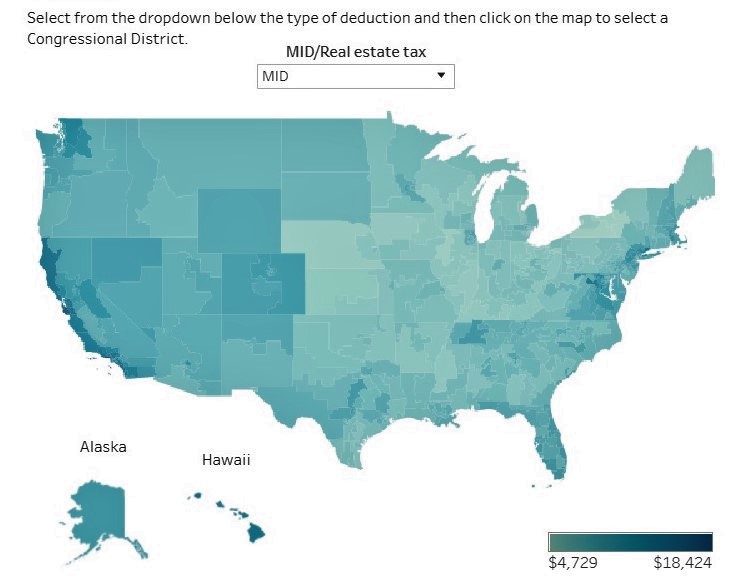 Click on the map image to go to the National Association of Realtors' website where you can check out how you and your neighbors' property tax and loan interest amounts.

Doing your tax plan due diligence: A couple of reminders before you head to the map.

First, the NAR amounts are averages. I found that our personal amounts didn't quite match up with the averages, especially when it comes to property taxes. In fact, our actual tax bill this year was around four times the average deduction in our gerrymandered Congressional district, which puts our denser suburban neighborhood in with a lot of less costly rural areas.

Still, the figures give you an idea.

Also, you'll need to know your Congressional district. That's something you'll need anyway so you let your Representative (as well as your state's U.S. Senators) know how you want them vote on the GOP tax plan.

If you don't know your Congressional district, you can find it by using the House's district look-up tool.

Regardless of whether the GOP tax plan will help or hurt you (and it might be a while before we really know since the framework is short on details, like what income amounts will fall into its three tax brackets), let your lawmakers in Washington, D.C., what you them to do.

And remember, that constituent feedback applies to more than just taxes.