Working, and paying taxes, on holidays

Happy Labor Day. While many Americans are working on this holiday, others are fortunate to have off this first Monday in September.

Whether you're working or not most likely depends on the type of employee you are.

The Fair Labor Standards Act (FLSA) does not require employers to pay employees for time not worked, such as vacations or holidays, writes Susan Heathfield for The Balance.

Different jobs, different days off: Salaried employees in exempt professional, technical or managerial positions expect paid holidays. Nonexempt, or hourly, employees are less likely to have paid holidays, or they receive fewer such days off than their salaried counterparts.

In some cases, workers who clock in while others are sleeping in get holiday pay.

However, absent a collective bargaining agreement, whether or how much holiday pay you get is totally up to your boss. There are no federal or state laws that require companies to compensate you more for holiday work than your normal hourly rate.

If you do get extra pay this Labor Day, good for you … and the U.S. Treasury. Today's earnings will be reflected in your income and payroll tax withholdings.

If like me you're a contractor working on holidays, things don't change. We still must meet our deadlines for the amount negotiated with our clients.

And, oh yeah, keep track of our earnings so we can make the appropriate estimated tax payments. Remember, we have one of those, the third of the tax year, coming due on Sept. 15

Enjoy employment-themed movies: As for all y'all with Labor Day time to kill, consider checking out a work-related movie.

Here are 10 of my employment-themed film favorites.

In the classic silent movie "Modern Times," Charlie Chaplin's Little Tramp struggles to survive in the modern, industrialized world. The 1936 comedy, written and directed by Chaplin, is a comment on the desperate employment and financial conditions many people faced during the Great Depression. Trust me, despite the harsh setting and topic, Chaplin entertains. 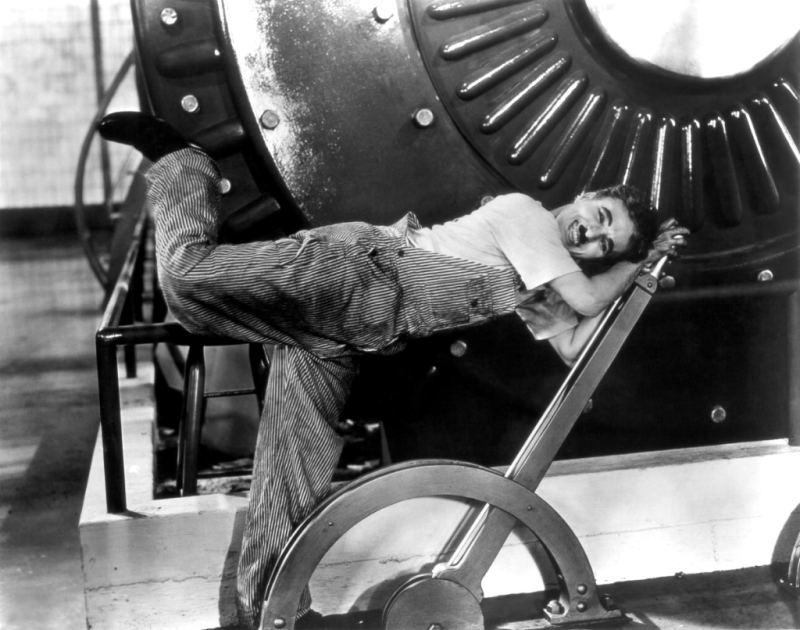 Charlie Chaplin as the Little Tramp on a new job in "Modern Times." (Photo via Wikipedia)

More modern workplace issues are the subject of Mike Judge's contemporary comedy "Office Space." Live vicariously through the three company workers who hate their jobs and decide to rebel against their greedy boss. Plus, Milton Waddams' red stapler!

Who hasn't felt like they knew exactly what needed to be done to get the job done right? That's why we cheer for the movie version of real-life environmental health activist "Erin Brockovich." Julia Roberts portrayal of the insistent, committed single mom who becomes a legal assistant and almost single-handedly brings down a polluting power company earned her an Oscar. Albert Finney, who played her boss, deserved one, too.

Want more environmental activism? Rent or stream the late Mike Nichols' "Silkwood." Meryl Streep is the title character, a plutonium processing plant worker who, according to legend and the movie, literally gave her life to expose the facility's worker safety violations. Streep and costar Cher received Academy Award nominations for their performances, Nichols for his direction.

I'm on a heroic worker roll with "Norma Rae," the 1979 biopic about efforts to organized union workers in the South. Sally Field as the film's lead won her first Oscar for her performance.

OK, let's get back to lighter film fare with a double feature of employees getting the better of their horrible bosses. Yep, I'm talking about "9 to 5" "Working Girl."

In "9 to 5," released in 1980, and pre "Grace and Frankie" Jane Fonda and Lily Tomlin, along with movie theme-song writer/singer Dolly Parton, take down their sexist, egotistical, lying, hypocritical, bigoted boss, played with relish by Dabney Coleman.

Hey, guys, I haven't forgotten y'all. "Trading Places" gives us Eddie Murphy as a street-smart con artist and Dan Aykroyd as a snobbish commodities broker who initially unknowingly switch places as part of a nature vs. nurture bet. But the duo wins in the end, besting the two brothers — played by Don Ameche and Ralph Bellamy —  who used Murphy's and Aykroyd's stations in life as an experiment, giving the comedy some social commentary bite.

Yes, I'm a George Clooney fan, so his 2009 movie "Up in the Air" makes my workplace flix list. Clooney's character specializes in firing people, a job he actually enjoys. But as the story progresses, his mind and job choice changes.

Finally, the Labor Day movies round-up closes with a movie about a worker who rarely, if ever, gets a paid holiday. "Waitress" stars Kerry Russell as Jenna, a pregnant, unhappily married waitress who falls into an unlikely relationship as a last attempt at happiness. Bonus: there are lots and lots of pies.

I know I was a bit late in getting this post up, so you probably won't be able to get all 10 of these movies in this afternoon. But check them out in the coming weekends. You'll be glad you did.