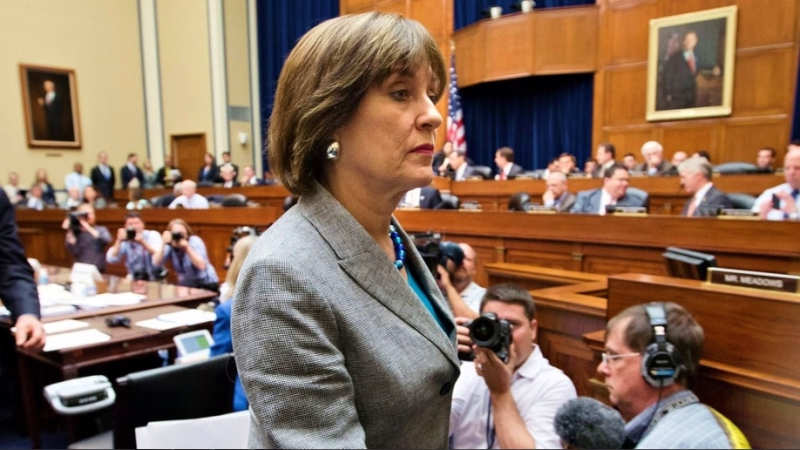 Former Internal Revenue Service Exempt Organizations chief Lois Lerner leaves a Capitol Hill hearing on how the agency handles tax-exempt status requests. Her refusal to testify before two House Oversight Committee hearings in May 2013 and March 2014  ultimately led to her resignation from the IRS.

Remember back in April 2015 when the Department of Justice decided it wouldn't follow-up on a Congressional contempt citation against Lois Lerner or "take any other action to prosecute" the former Internal Revenue Service executive?

And now, with the Justice Department full of fresh faces serving under a GOP White House, they asked for reconsideration of the matter.

But just like two years ago, the lawmakers didn't get the legal response they wanted. The Justice Department has once again said it won't reopen a case against Lerner.

Flashback Friday look at Lerner: In case you, unlike the House members who take their Party's never-forget elephant symbol seriously, Lerner was in charge when the Tea Party targeting scandal broke.

Investigators found that the IRS' Exempt Organizations (EO) division that Lerner headed, had used improper screening criteria in deciding which organizations would be granted 501(c)(4) tax-exempt status. EO employees, according a Treasury Inspector General report issued in May 2013, focused on conservative groups in general and the Tea Party in particular.

Lerner twice refused to testify before the House Oversight and Government Reform Committee, invoking her Fifth Amendment right against self-incrimination. That led to the contempt charge.

Lawmakers sought other ways to discipline/punish Lerner, all of which failed. She ultimately resigned from the IRS while the issue was still a hot political and tax topic.

Trying again, two years later: For some House members involved in the Tea Party targeting cases since its revelation, it still is an issue they want someone — either Lerner or IRS Commissioner John Koskinen, who's faced House committee censure and continuing threats of impeachment — to pay a heftier price for than mere Congressional finger wagging.

To that end, several GOP members of the House Ways and Means Committee wrote a letter on April 12 to Attorney General Jeff Sessions seeking reconsideration of charges against Lerner "in order to restore taxpayers' trust in the IRS."

Rep. Kevin Brady (R-Texas), chairman of the House tax-writing committee, and Rep. Peter J. Roskam (R-Illinois), chair of the W&M Subcommittee on Tax Policy, expressed concern in their letter that the earlier Department of Justice (DOJ) decision was politically motivated.

"It is clear that when the DOJ announced in October 2015 that it would not bring charges against Lois Lerner, the agency was following President Obama's signal on how he wanted the investigation to be handled," wrote the Ways and Means members. "Taxpayers deserve to know that the DOJ's previous evaluation was not tainted by politics."

DOJ disagrees: Sessions was not persuaded.

The DOJ did determine two years ago that the IRS' "mishandling of tax-exempt applications disproportionately impacted applicants affiliated with Tea Party groups and similar groups," wrote Assistant Attorney General Stephen E. Boyd in a response to the Brady-Roskam request.

But, added Boyd, the DOJ investigation did no uncover evidence of criminal intent by any IRS official. "The Department therefore state that it was closing the investigation and would not pursue criminal charges."

Further consideration of the matter, added Boyd, "would not be appropriate based on the available evidence."

"I assure you that the Department has carefully studied the law, given the evidence the utmost consideration, and thoroughly reviewed the prior investigation from an objective perspective," wrote Boyd.

Disappointment, anger on other side: Brady, Roskam and their like-minded colleagues are not pleased.

"This is a terrible decision. It sends the message that the same legal, ethical, and Constitutional standards we all live by do not apply to Washington political appointees – who will now have the green light to target Americans for their political beliefs and mislead investigators without ever being held accountable for their lawlessness," said Brady in a statement issued following the latest DOJ decision. "I have the utmost respect for Attorney General Sessions, but I'm troubled by his Department's lack of action to fully respond to our request and deliver accountability."

Brady added that this latest turn in essence shows that the justice system in Washington is deeply flawed.

"The decision not to prosecute Lois Lerner is a miscarriage of justice," said Roskam in the same W&M statement. "Our democracy is injured when those who taxpayers entrust with great authority ignore the law to advance their own political agenda without repercussion."

Sorry, GOP. Looks like, at least this time, you're going to have to let it go.