Aside from the damage that hurricanes cause, one of the biggest problems is that they often, especially in September, effectively come back to back. That's what happened with Hurricane Irma. The angry sister of Hurricane Harvey walloped all of Florida three weeks after coastal Texas was gut-punched by Harvey's historic flooding. The back-to-back U.S. landfalls was a first for Category 4 storms.

The only good news here, at least tax-wise, is that the Internal Revenue Service has a Harvey template for Irma relief and it's following it.

Special consideration for Irma victims: The agency announced today that tax relief for Hurricane Irma victims in parts of Florida and elsewhere parallels that granted last month to victims of Hurricane Harvey. This means that Sunshine State et al taxpayers have until Jan. 31, 2018, to file certain individual and business tax returns and make certain tax payments.

"This has been a devastating storm for the Southeastern part of the country, and the IRS will move quickly to provide tax relief for victims, just as we did following Hurricane Harvey," said IRS Commissioner John Koskinen in a statement announcing the tax relief for those affected by Irma.

"The IRS will continue to closely monitor the storm's aftermath, and we anticipate providing additional relief for other affected areas in the near future," added the commissioner.

The "near future" arrived Sept. 19, when the IRS announced that the expanded relief now applies to any area designated by the Federal Emergency Management Agency (FEMA) as qualifying for either individual assistance or public assistance in Florida. 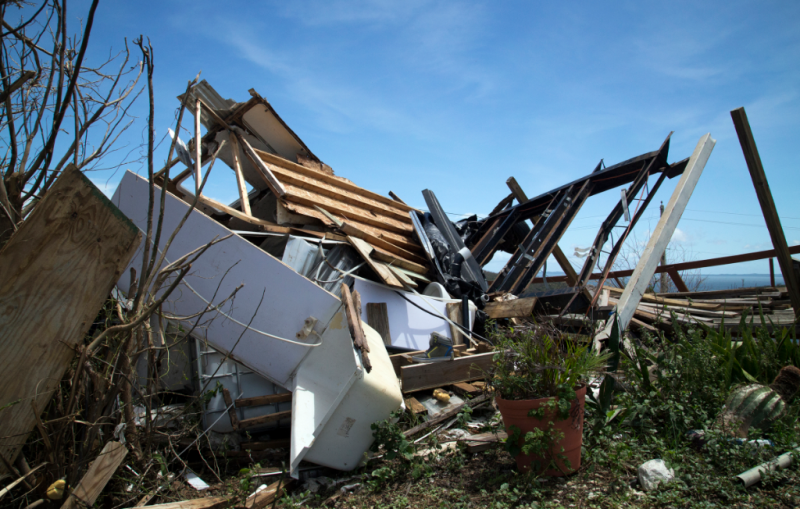 Just one of the homes on Puerto Rico destroyed by Hurricane Irma. (Photo by Yuisa Rios via FEMA)

Note also the effective dates of the IRS relief, which are when Irma hit the various areas. That's various tax filing and payment deadlines that occurred starting on Sept. 4, 2017, in Florida and Sept. 5, 2017, in Puerto Rico and the Virgin Islands.

Taxpayers in other parts of Florida and other states that are later added to the FEMA list will automatically receive the same filing and payment relief, says the IRS. (9/15/17: See bullet points above.)

More filing — not paying — time: So practically, what does the IRS' Irma action mean? For individuals who in April got extra time to file their 2016 tax returns, they now have almost five more months to complete this filing task.

But as in the Harvey case, remember that when you got your extension earlier this year, you should have paid any due tax by April 18. If you didn't, the IRS is continuing to tally penalties and interest on what you owe.

Retirement money access also eased: As it did with Harvey, the IRS today also eased rules regarding loans and hardship distributions from 401(k)s and similar workplace retirement plans for Hurricane Irma victims.

This broad-based relief means that a retirement plan can allow a victim of Hurricane Irma to take a hardship distribution or borrow up to the specified statutory limits from his/her retirement plan.

It also means that a person who lives outside the disaster area can take out a retirement plan loan or hardship distribution and use it to assist a son, daughter, parent, grandparent or other dependent who lived or worked in the disaster area.

FinCEN offers FBAR relief: In addition, FinCEN, which is acronym used by the Treasury Department's Financial Crimes Enforcement Network, also announced today that FEMA designated Hurricane Irma victims have until Jan. 31, 2018, to file their Report of Foreign Bank and Financial Accounts (FBAR) report for the 2016 calendar year. Without FinCEN's extension, the 2016 FBAR would have been due by Oct. 15.

FinCEN also is following the IRS approach to FBAR filers, including relief workers, who live outside the disaster area, but whose records required to meet the deadline are located in the affected area. FinCEN says it will work with these affected FBAR filers, who should contact the FinCEN Resource Center by calling toll-free 800-767-2825 (or 703-905-3591; regular/long-distance phone charges apply) or emailing frc@fincen.gov.

Business breaks, too: As for businesses, the Jan. 31, 2018, extension applies to businesses that got filing extensions originally due in by the end of this week.

Also, calendar-year tax-exempt organizations whose 2016 extensions run out on Nov. 15 now have until Jan. 31 of next year to file those.

Automatic relief: Again, as with Harvey tax help, those dealing with taxes in the aftermath of Irma don't have to ask for this special treatment.

The IRS automatically provides filing and penalty relief to any taxpayer whose address of record with the tax agency is in the disaster area.

If, however, you are eligible for special Hurricane Irma relief and still get an IRS late filing or late payment penalty notice, call the number on the notice to have the penalty abated.

The IRS also says it will work with taxpayers who live outside the disaster area, but who need records located in the disaster zone to meet a now-delayed deadline.

Similarly, if you qualify for relief but live outside the disaster area need to contact the IRS toll-free at 866-562-5227. This includes relief and recovery workers who are in the Irma affected areas as part of a recognized government or philanthropic organization.

Tax claim time shifting: Not to run this tax reminder into the ground, but since Irma has been declared a major disaster, taxpayers in those designated areas have a choice on when to claim any uninsured or unreimbursed disaster-related losses on their taxes.

You can claim them as an itemized deduction on the tax return for the year the disaster occurred, which in this case would be the 2017 filing submitted next year. Or you can claim them on your prior year tax return, which is the 2016 filing.

You also can find details on available storm-related tax matters at:

Yeah, that's a lot of tax stuff to think about in addition to simply trying to put your pre-hurricane real life and home back together.

Take your time, especially since the IRS is giving you more of it, and make the best decisions for your family, finances and taxes.

As I understand it, the relief applies if the storm materially affects your ability to meet tax deadlines. But I would call the IRS and check.

What if the LLC is registered in FL with a principal place of business listed on its SS-4 as Duval County FL but its mailing address on its federal returns is in Pennsylvania?