Hurricane Jose is back; Eastern Seaboard could be affected

UPDATE, Sep. 19: Hurricane Maria is heading for Puerto Rico today as, says the island's governor, the "potentially most catastrophic hurricane to hit Puerto Rico in a century."

Weather officials also warn that rip currents are a danger along the entire U.S. east coast.

I know it's peak Atlantic hurricane season, but this has to stop. If only my pleas were that powerful.

Instead, all I can do is let you know that Jose, who's been meandering the Atlantic for weeks, has reformed and is back at hurricane force.

That's Hurricane Jose, due east of Florida and the Bahamas, but those spots are OK. He's heading northwest, meaning others on the eastern U.S. coast could face some weather issues in the coming days. (NOAA GOES radar image)

Jose, which started on Aug. 31 as a tropical wave off the west coast of Africa, developed into the 10th named storm of the 2017 season, the fifth hurricane and the third major hurricane. It previously had reached Category 4 strength before losing momentum and becoming a tropical storm earlier this week.

It's now about 640 miles southeast of North Carolina (or if you're a dedicated storm tracker the system is near latitude 27.1 North, longitude 70.3 West) and is slowly (10 mph) moving northwest. The National Hurricane Center (NHC) expects it to maintain that course today, then turn to the north-northwest by late Saturday, Sept. 16, and then go more northerly on Sunday, Sept. 17.

Currently, hurricane-force winds extend about 35 miles from the center of Jose, with tropical-storm-force winds felt as far as 140 miles from its core.

In addition to winds, Hurricane Jose is producing ocean swells off of Bermuda, the Bahamas, the northern coasts of Hispaniola and Puerto Rico, and the southeastern U.S. coast. The more turbulent seas are expected to spread northward along the Mid-Atlantic coast during the next few days.

And the cone of uncertainty puts the upper East Coast of the U.S. in uncomfortable territory. 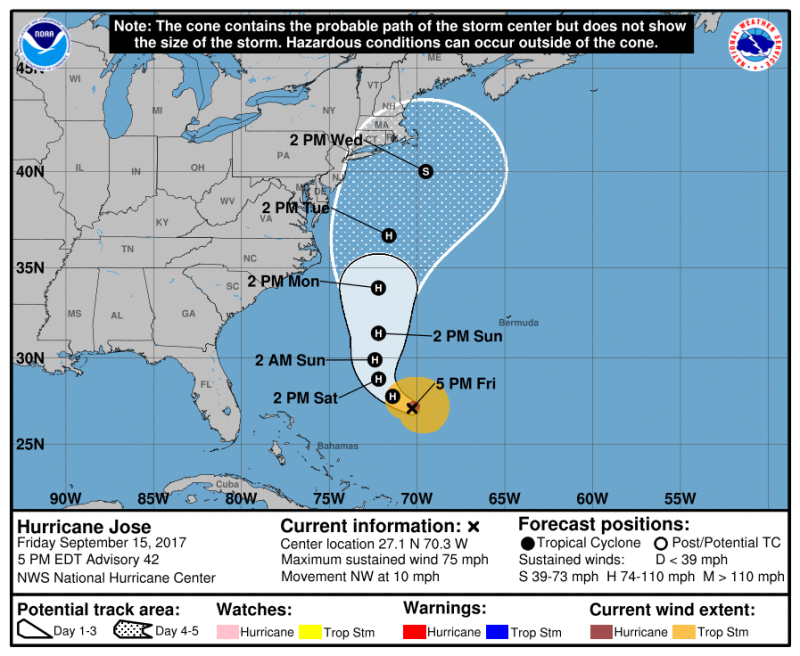 Since we've all watched in recent weeks as Harvey and Irma shifted before making landfall in Texas and Florida, respectively, all we can do is, as the saying goes, stay tuned.

While I appreciate the readership, I'm really getting tired of referring y'all to my Storm Warnings page. But it is where you can find links to previous blog posts about getting ready for a storm (or any other natural disaster), recovering afterwards and helping those who were in a storm's path.

Finally, be careful. No piece of real estate or personal property is worth putting yourself in danger.