Are you ready for some football and taxable winning wagers? 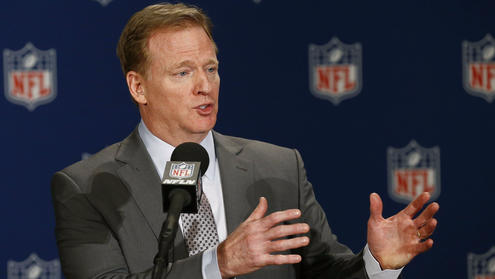 NFL Commissioner Roger Goodell could be the target of Patriots fans' ire tonight in the league's season opener in Foxborough, Massachusetts. He's also the subject of some prop bets being placed on the game.

With Houston and much of southeast Texas still struggling with Hurricane Harvey recovery and Florida looking like it will take a direct hit from Hurricane Irma, I am definitely ready for a little bit of professional football diversion.

That's why my TV will be toggling tonight between the 2017 season-opening NFL game on NBC and The Weather Channel.

I'll be watching the football game just for fun.

Plus, the Chiefs are playing the Patriots. As a Cowboys fan, it's fun to boo the only other team that rivals mine in haters.

Other football fans will be more involved in the game, because they have:

And some of those wagers are of the more goofy variety. That's right, I'm talking the prop bets on tonight's 2017 NFL season opener.

These wagers are on any proposition that could conceivably happen during a game, but many are not related to events on the field that affect a game's final score. They tend to get most attention around Super Bowl time, but they're around throughout all sports' seasons.

They also tend to be about silly situations. But silly or serious, all winnings from bets are taxable.

My favorite prop (short for proposition, as in what might happen) bet is how long will New England Patriots' fans boo Roger Goodell. The NFL commissioner is still much disliked in that part of the country because of his role in sidelining star quarterback Tom Brady as part of the Deflategate investigation.

The over-under on the length of Patriots fan booing of Goodell is 35½ seconds. I know 36 seconds is longer than most people think, but I'm taking the over. I'm a sports fan, and I know we fans hold on tightly to our grudges. And the stands tonight will be filled with fans waving Goodell clown face towels.

Of course, the time also could be affected by how long Goodell's visage appears on monitors at the stadium. I suspect that's the only way Goodell will appear before the fans tonight.

Nevada bookmakers, who are the only ones (so far) who can take legal sports wagers, also say the odds are 7/2 that Brady and Goodell will shake hands on the field before tonight's game.

Personally, I think that could happen, especially since Brady's anger has likely been salved by the fifth Super Bowl ring he won in February. But again, I don't see Goodell looking for any public situation that could put him line for more booing.

How 'bout them Cowboys bets: While the 2017 NFL season kicks off tonight, there are plenty other games — and prop bets — for the coming weekend and Monday night match-ups.

A couple of off-beat bets that involve my 'Boys naturally caught my eye.

One wonders whether Dallas owner Jerry Jones will be brazen enough to wear his Hall of Fame gold jacket to Sunday night's home game against the New York Giants. The oddsmakers say it's 9/1.

While I'd love to get $9 bucks back for a $1 bet, I'm saying no. Even for the man who built Jerry World, that's pretty tacky.

Plus, Jerry knows that the Cowboys already are under the microscope with the Ezekiel Elliott suspension being waived for the first game. (And yes, the cynic in me believes NBC put pressure on the league to let the running back play in the network's first Sunday night game of the season.)

So Jerry's going to hole up in his owner's box and cheer the team from there, at least until the end of the game when, if the Cowboys are winning, he'll make it down to the field for hugs and attention.

As for who else will be watching the Cowboys like me, that is on television, there's an over-under for that. Bookmakers are taking bets that it will be more or less than 25 million.

I'm going with over. Historic viewership of Cowboys' televised games is huge. Last year, they had four of the five most-watched regular season games. That's also why I'm sticking with my cynical conspiracy theory about NBC involvement in getting Zeke on the field for this game.

Other televised over-under betting lines for coming games are:

Packers' QB Aaron Rodgers has been getting grief for the uber-hairy upper lip (and yes, I know I should have come up with a Lyft comparison, but since that company shaved, so to speak, its signature logo…). My favorite take on the 'stache comes from Jarrod Remer via Twitter. 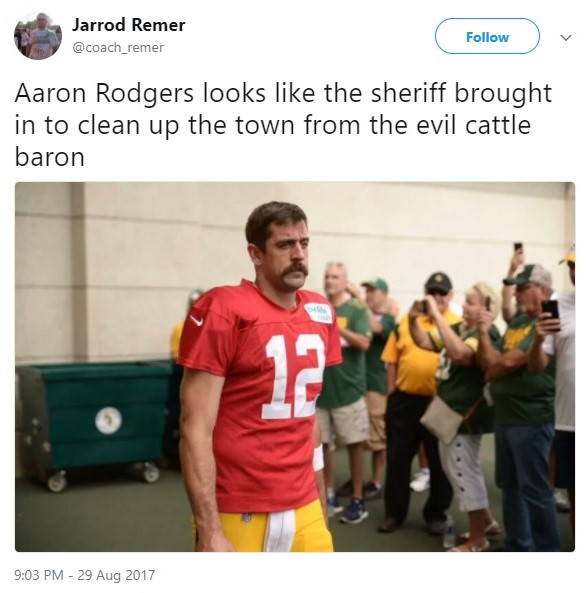 Oddmakers think Rodgers' off-season mustache will be gone by kickoff Sunday, setting the line at 1/3. I hope so.

Remember the cost and taxes: I know I'm not your mother, but I can't close without offering two warnings.

First, betting can be costly. Don't wager more than you can afford to lose. If you have an urge to do that, consider getting professional help to beat a possible gambling addiction.

Second, even if you do win, betting can cost you in the form of taxes. So be sure to keep records of what you win and lose, so you can use those bad bets to lower your taxable wagering income.

Now just sit back and enjoy the coming football season.

And, of course, Go Cowboys!

Happy to see football season back and not tax season.