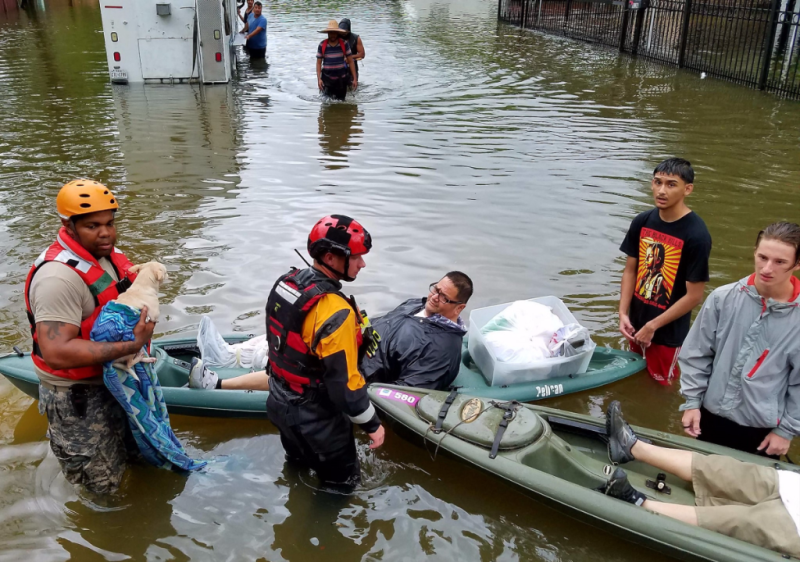 Residents of Houston and much of southeast Texas are still dealing with Hurricane Harvey's floods. Texas National Guard members are helping. (Photo by Staff Sgt. Tim Pruitt via Flickr)

If you're looking for financial help to help you recover from Hurricane Harvey damages, the Internal Revenue Service says you can use your workplace retirement plan money.

The IRS announced that 401(k)s and similar employer-sponsored retirement plans can make expedited loans and hardship distributions to hurricane victims and members of their families in Texas.

Since Harvey made initial landfall the night of Aug. 25 near Rockport, Texas, the federally-declared disaster area has grown to 29 Lone Star State counties. They are:

In addition to private company 401(k) plans, the IRS easing of early access for Harvey victims also applies to employees of public schools and tax-exempt organizations with 403(b) tax-sheltered annuities and state and local government employees with 457(b) deferred-compensation plans.

Streamlined access to accounts: In all these retirement account cases, the IRS has instituted streamlined loan procedures and liberalized hardship distribution rules. The changes, says the IRS, will make the plan money available to account holders more quickly and with a minimum of red tape.

Plans will be allowed to make loans or hardship distributions before the plan is formally amended to provide for such features.

In addition, the company-sponsored plan can ignore the reasons that normally apply to hardship distributions. This will allow, for example, plan participants to use the money for food and shelter.

If a plan requires certain documentation before a distribution is made, the plan can relax this requirement.

And if the plan owner is fortunate enough to have escaped Harvey's wrath, but their family members weren't so lucky, the retirement account holder can help. The eased plan access rules allow them to get to their retirement money to help their children, parents, grandparents or other dependents who lived or worked in the Harvey disaster area.

To qualify for this relief, hardship withdrawals must be made by Jan. 31, 2018.

Repayment, other rules remain: While the IRS is making access to the retirement funds easier, it also The IRS emphasizes that the tax treatment of loans and distributions remains unchanged.

Ordinarily, retirement plan loan proceeds are tax-free if they are repaid over a period of five years or less. Hardship distributions are generally taxable and subject to a 10-percent early-withdrawal tax.

Many disaster victims, however, are likely to find those rules worth dealing with in order to get to some money to help recover from Harvey's devastation.

Uncle Sam provided similar relief last year to those whose property was damaged by flooding in Louisiana, as well as to victims of Hurricane Matthew.

IRA help also possible: What if you have a traditional IRA instead of a workplace retirement account?

While you can't take a loan from your IRA, you might be eligible for hardship distributions from that personal retirement plan.

What about Louisiana? Five parishes in Louisiana were declared under a state of emergency even before a weaker Tropical Storm Harvey crossed that border.

While those parishes — Beauregard, Calcasieu, Cameron, Jefferson Davis and Vermilion — aren't part of this retirement plan announcement, depending on Federal Emergency Management Agency (FEMA) assessments, some of those Pelican State areas could eventually be declared major disaster areas.

If additional areas in Texas or other states are identified by FEMA for individual assistance because of damage related to Hurricane Harvey, the IRS says in its formal Announcement 2017-11 that those residents will receive the same retirement plan access relief.

Nice to see blogs like this...got a more useful informations..spent a nice time with this blog.keep more updates like this..