Hurricane Harvey has inundated Houston. And it's still raining there. And in other parts of the Lone Star State. 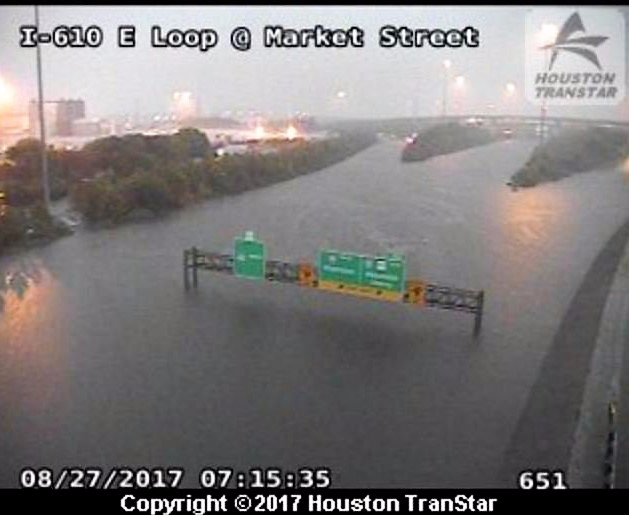 Thanks to The Weather Channel's Matt Sitkowski for posting this image on Twitter, along with one showing these Houston roads pre-Hurricane Harvey so we can get some perspective on the extent of H-Town's hurricane-related flooding.

That means lots of folks are going to need help recovering from the strongest tropical system to hit Texas since Hurricane Carla in 1961.

From Corpus Christi to Port Arthur along the Gulf Coast and, thanks to Harvey's size and slow movement, well inland, my native state is getting overwhelmed by prodigious rainfall.

Bad and expected to get worse: Weather and government officials still don't the full scope of damage because weather conditions prevented emergency crews from getting into the hardest-hit places.

They do know that it's going to be worse because it's been raining steadily in some places for two days.

And a lingering Harvey could unload more than 40 inches of rain on the southeastern part of the state, including already flooded Houston, the country's fourth-largest city. 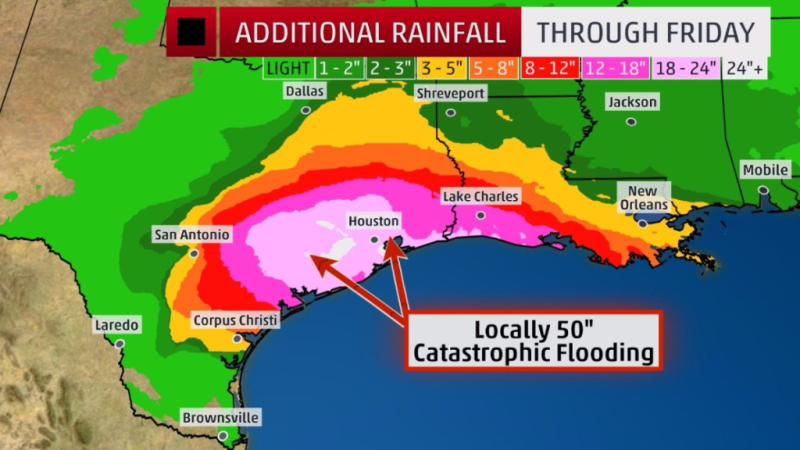 Rain projection from The Weather Channel.

It's easy to feel helpless when natural disasters strike. But there are many ways those of us out of harm's way can help those who will be trying to put the pieces of their lives back together after Harvey finally leaves.

Donate money.
I know a lot of folks want to do something more personal when disaster strikes, but realistically the best way to help people affected by any catastrophic occurrence is to contribute to charitable agencies that are experienced in disaster relief.

Charity Navigator has compiled a list of what it has deemed highly-rated organizations responding in Harvey's aftermath to provide assistance to the people and communities affected by it.

Some of the groups listed below are on that list, but I'm highlighting them separately, too.

The Salvation Army also accepts online donations at givesalvationarmy.org or by phone at 1-800-725-2769. You can text a donation by sending STORM to 51555.

Samaritan's Purse is taking hurricane-related donations at its samaritanspurse.org.

Save the Children efforts are accepted at its Hurricane Harvey Relief Fund.

Southern Baptist Disaster Relief donations can be made at its Hurricane Harvey Response page.

Heart to Heart International contributions are accepted at hearttoheart.org.

Texas Diaper Bank is putting together disaster relief kits for families with young children. Donate to this project at its website.

Don't forget about furry family members. Animal shelters and rescue groups are taking in pets displaced by the storm. They would appreciate your help in meeting these needs. You can donate to:

The Rockport-Fulton Texas Chamber of Commerce is raising funds to assist in recovery efforts in those communities. You can contribute to this effort at its GoFundMe Hurricane Harvey Recovery Fund page.

GoFundMe itself is seeking donations that will benefit a wide range of relief activities. Check out the full list of fundraisers at the site's Hurricane Harvey Relief page.

GlobalGiving, another crowdfunding site, has launched a hurricane relief fund aimed at gathering funds for local nonprofits in the storm-stricken region.

And the folks of New Orleans, many who turned to Houston for help after Hurricane Katrina devastated their beloved coastal home, have created NOLA Help for Harvey Facebook page as a way to connect Harvey victims in need with south Louisianans who have assistance to give.

Donate blood.
Despite efforts by emergency preparedness officials and first responders across the state, Hurricane Harvey has been deadly. Many more people are injured. In the best of times, area blood banks need support. They definitely appreciate your literal giving of part of yourself during disasters because blood banks in places hit by Harvey are closed.

If you're not in the Lone Star State, find blood drives near you or book an appointment via the American Red Cross website.

Volunteer.
In the coming weeks there will be a lot of physical digging out. If you want to offer hands-on help, volunteer. But don't just show up in a place hard-hit by Harvey. Go through a group that coordinates efforts so they will be the most effective.

Red Cross has volunteer opportunities at its special online page.

Salvation Army has a similar online system at its website.

Some people, rather than going to the storm-hit areas to help, are opening their homes to Harvey evacuees.

Airbnb has a webpage where folks who have been displaced by the hurricane and those who want to offer them free lodging can connect. The online residential rental portal also is waiving fees for people affected by the disaster.

I'm sure there are many more storm-related relief efforts out there. Let me know in the comments those I've overlooked and I'll add them.

Tax deduction option: I know that everyone doing anything to help Hurricane Harvey recovery efforts are doing so out of the goodness of their hearts and a sincere desire to simply help in any way and as much as they can.

But this being a tax blog, I must point out that in some cases, your goodwill might be tax deductible. Check out the tax specifics on the benefits of giving, not just in connection with Harvey relief efforts, but throughout the year.

Thanks! And everyone, please stay safe!