The Trump Administration announced Wednesday, Aug. 2, support for an immigration plan that would dramatically reduce the number of people allowed to live and work in the United States.

The president might want to rethink that. Newcomers could be needed to fill the slots left by people who are voluntarily leaving the country. 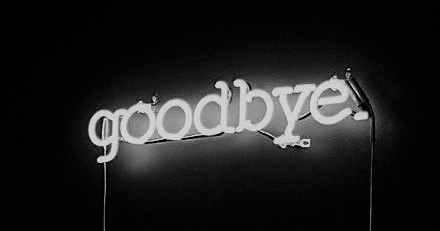 Yes, I know it’s apples and oranges. But the apparently coincidental timing of the effort to limit immigrants as even more citizens and long-term residents permanently leave is striking.

Surge in U.S. exits: The announcement of the latest group of expatriates, which will be officially published today, Aug. 3, in the Federal Register, contains 1,759 names.

These individuals, who per Internal Revenue Service records officially expatriated during the second quarter of 2017, represent the second highest quarterly number ever, according to the international tax law firm Andrew Mitchel LLC.

Mitchel and his colleague Ryan Dunn note the expatriations between April and June this year trail only those in the fourth quarter of 2016, which had 2,365 people declaring their departures from the U.S. of A.

And when you add the total number of exiting Americans and other long-term residents to date, the 2017 exodus is on pace for an all-time high.

So far this year, the Internal Revenue Service has reported 3,072 expatriations. That’s more folks willingly leaving the United States already this year than did so for the entire year of 2013. Four years ago, the U.S. counted a total of 2,999 expatriates. 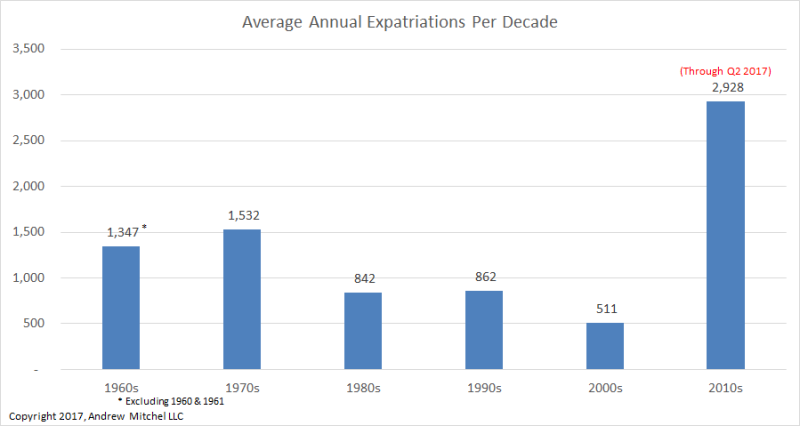 Deciding to go: Why do people decide to leave the United States? The reasons are varied.

Some have long wanted to live permanently abroad. Others have family in other countries and want to be closer.

Perhaps a handful followed through on the perennial post-election threats to leave if their candidate lost. Remember that spike of 2,365 expatriations during last year’s waning months.

And some depart, no doubt, because of taxes.

Unlike most of the rest of the world which operates with territorial taxes, meaning you pay taxes to the country in which the money is earned, the U.S. tax system is worldwide. That means that the IRS gets a cut of Americans’ pay regardless of where in the world they earn it.

And that means double tax duty. In addition to complying with the U.S. tax requirements, the internationally based Americans also must deal with the tax laws of the countries in which they reside.

The United States’ global income tax disclosure laws can be an additional burden. Many banks don’t like handling the money of Americans living in their countries because that means the financial institutions then must deal with IRS reporting requirements.

The Foreign Account Tax Compliance Act, or FATCA, is among the most loathed reporting obligations. This law requires that U.S. individuals report certain foreign assets and banks disclose all foreign accounts held by Americans. Failure to do so results in costly tax penalties for both.

Tax cost of expatriation: Deciding to relinquish U.S. citizenship is not easy, emotionally or financially.

Since passage of the HEART (Heroes Earnings Assistance and Relief Tax) Act of 2008, expatriates have had to pay a hefty exit tax.

The amount is based on the value of the departing U.S. citizen’s assets on the day before expatriation. The assets don’t have to be sold, but the expatriate must calculate and pay the capital gains tax bill on this deemed liquidation.

The taxing threshold for 2017 expatriates' paper-only liquidations is $699,000. Assets valued at less than that don’t trigger the tax.

But if you face the exit tax, the capital gains rate on the taxable amounts exceeding the threshold is 20 percent. For spouses who expatriate, each spouse files a separate

This exit tax is collected when a person meets any one of the following three conditions:

So basically, the IRS gets expatriates coming and going.

More, though, apparently are finding that paying the high tax price to leave the United States is worth it.

Maybe some of those Hollywood celebs are keeping their promise to leave when Trump was elected?
These expat numbers seem small (even the increased ones), given the size of the US population. Is it possible a lot of people expatriate without reporting it?