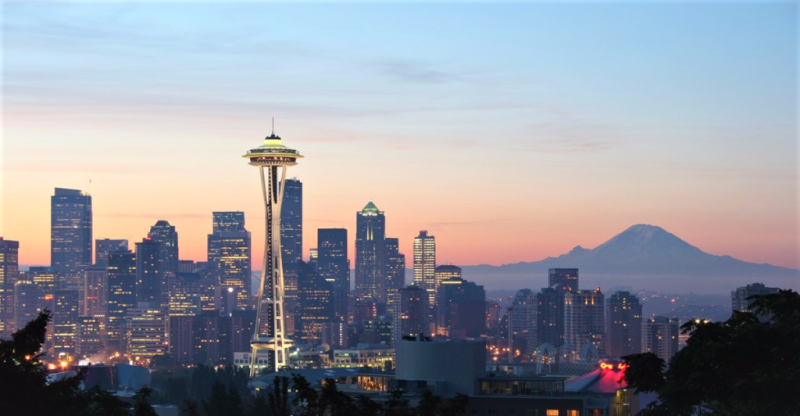 Downtown Seattle seen from Queen Anne Hill, with the Space Needle standing out and Mount Rainier in the background. (Photo by Rattlhed via Wikimedia Commons)

Washington is one of seven states that does not have a personal income tax, but it’s largest city plans to collect one from its wealthiest residents. If the courts let it.

On July 14, Seattle City Council bill 119002 became ordinance 125339, which beginning in 2018 will officially impose an income tax on high-income residents.

The 2.25 percent tax will apply to individuals within the city's borders with an annual income exceeding $250,000 a year, double that income threshold for joint filers. Supporters say that would be around 20,000 of the than 660,000 Seattle residents.

The earnings subject to the tax will come from the Seattle residents' annual federal tax returns, specifically line 22 of Form 1040, line 15 of Form 1040A, line 9 of Form 10401 or "the equivalent on any form issued by the Internal Revenue Service that is not reported on Schedule K-1 for a beneficiary."

Not all income taxed: Don’t panic high-earning Seattle residents. The tax won’t apply to all your money.

It will be calculated only on the amounts more than the filing status thresholds. So up to $250,000 of a single Seattle taxpayer's income will remain tax free, with the 2.25 percent tax applied to the amount that's more than that. The same process applies to the $500,000 threshold for joint Seattle filers.

The tax is scheduled to take effect in 2018. That could change however, as lawsuits challenging the measure already have been filed.

Seattle city income tax returns and payments will be due on the federal schedule, that is, April 15 of the year following the tax year.

And beginning in 2019, the income thresholds that trigger the tax will be adjusted for inflation.

There are a lot of figures associated with the Seattle income tax, but the winner, so to speak, of this week’s By the Numbers honor is the tax rate itself, 2.25 percent.

More money: Supporters of the new income tax on these wealthier residents should generate, based on 2014 federal income tax data, about $125 million per year for Seattle.

Cities seeking added revenue is nothing new. Seattle's lawmakers, however, say there's an urgent need to find additional funding because of political changes in Washington, D.C.

"The President of the United States has proposed to imminently eliminate millions of dollars per year from Seattle's budget both directly and indirectly through cuts to state funding," says the new law. "Without additional revenue tools, Seattle is in a weak position to respond to proposed federal budget cuts."

Among the city programs at risk without a new source of funding are a variety of education initiatives, as well as the city's goal to achieve zero next greenhouse gas emissions by 2050.

"An income tax on high-income residents provides a progressive revenue source to fund [these] crucial needs and will help the City continue to grow and thrive for all of its citizens," according to the law.

Specifically, the law calls for using the income tax money to:

A fairer tax system: In addition to bringing the city more money, advocates of the move say the limited Seattle income tax is only fair.

According to the fact sheet issued during debate of the Seattle income tax proposal:

Washington state has one of the most regressive state and local tax structures in the nation. A regressive tax structure is one in which taxpayers with relatively low incomes pay a higher share of their income in taxes than do higher income taxpayers. The City of Seattle’s tax structure is regressive because it receives about 45 percent of General Fund revenue from retail sales and property taxes, both of which are very regressive taxes. The City is seeking to use a tax on high-income households to reduce the regressive nature of its tax system.

Seattle Mayor Ed Murray reiterated that tax approach, as well as the change in federal help for states and cities, in a statement on his website.

“Seattle is challenging this state’s antiquated and unsustainable tax structure by passing a progressive income tax,” Murray said. “Our goal is to replace our regressive tax system with a new formula for fairness, while ensuring Seattle stands up to President Trump’s austere budget that cuts transportation, affordable housing, healthcare, and social services. This is a fight for economic stability, equity, and justice.”

Fighting the tax: Whether the tax will ever be collected is unclear.

Opponents say the Seattle tax is in violation of state law that prohibits a city or county from taxing “net” income. State law, however, doesn’t explicitly define to what “net” refers.

So far, the city is facing three legal challenges to the new income tax.

The first, filed the day the ordinance took effect, is a challenge by Seattle resident S. Michael Kunath, who makes more than $250,000 annually.

At a rally before the final vote — which, by the way, was 9-to-0 for the tax — -Seattle’s mayor Murray said, “We welcome that legal challenge. We welcome that fight," adding that if the city wins, "it won't just be Seattle that's doing a progressive income tax."

And that possibility of more widespread tax expansion, say opponents, is the real problem.

No-tax states: I know you've been wondering since this post's first sentence. The seven states that don't have any type of income tax are Alaska, Florida, Nevada, South Dakota, Texas, Washington and Wyoming.

Two states — New Hampshire and Tennessee — collect tax only on their residents' dividends and interest earnings. Tennessee, however, is in the process of phasing out its investment income tax.