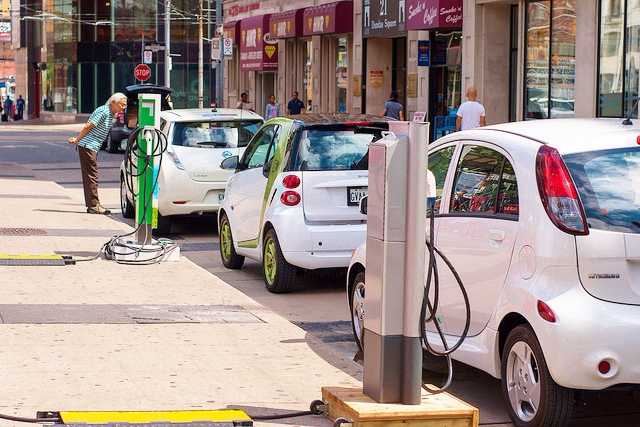 Many drivers worry about the accessibility of electric vehicle recharging stations. That's not a problem for the owners of these electric cars charging along an Ontario, Canada, street. (Photo courtesy EVObsession.com)

Contractors and the transportation industry say that will help improve the building and repair of the country's roads, bridges and other infrastructure projects.

Critics say the Administration's approach could lead to rubber stamping permits without adequate scrutiny, especially when it comes to environmental effects of such construction.

One thing, however, isn't up for debate yet. That's how Uncle Sam will pay for any upcoming infrastructure projects.

The White House says it will release a legislative package this fall, which is rapidly approaching, with details on Trump's campaign pledge of $1 trillion in U.S. infrastructure.

Early indications are that the Trump plan will include $200 billion in federal dollars to be allocated over 10 years to pay for projects. The Administration hopes the federal money will prime the pump for the remaining $800 billion it wants to come from states, localities and the private sector.

That won't be easy, on the fiscal and political fronts.

States speeding ahead: Meanwhile, states have gotten tired of waiting on federal help to fix their crumbling roads and bridges.

A January report from The Council of State Governments found that ways to pay for transportation funding was at the top of legislative agendas in as many as 16 states.

Several states followed through by hiking fuels taxes to pay for road projects.

Now some states are going further.

A growing number of states are imposing new fees on electric vehicles as officials scrounge for ways to pay for infrastructure projects they say are long overdue.

That brings to 17 the number of states that have imposed such fees, which typically range from $100 to $200 a year. Greentech Media says the states with electric car charges — financial in this case — are:

The reasoning is that since the autos don't use gas, they are not contributing to the upkeep of the roads they use.

It also underscores a shift in the traditional vs. electric auto industry.

At the height of the electric vehicle craze, the federal government established a tax credit for such vehicles It is still in place. Many states joined Uncle Sam in encouraging drivers to switch to more environmentally friendly autos by creating their own tax incentives and other measures.

Now they're demanding these drivers pay.

In addition to the new fees, Sierra Club research found seven states have eliminated rebates for purchasing an electric vehicle.

The reason for the attitude shift easy to see.

As the market for cleaner cars grew, so did the number of potholes on state roads. Now cash-strapped states are looking to take back money from those drivers it previously rewarded.

"Safe and smooth roads make California a better place to live and strengthen our economy," according to a statement issued by Brown when the bill passed this spring. "This legislation will put thousands of people to work."

"We see this as a concerning trend," said Gina Coplon-Newfield, director of the electric vehicles initiative at the Sierra Club, told CNBC. "We certainly want to see funding raised to support roads and bridges and transit. … But penalizing electric vehicle drivers is not the way to solve this problem."

Do you agree with the states that have added charges for owners of electric autos?

Or do think the environmental benefit of the vehicles is enough to exempt them from non-fuel fees?

Personally, I'm a user fee kind of gal. And as I've watched the number of Teslas increase here in Austin, I've also cursed the continued deterioration of the roads that those drivers use, too.