Net gains in UK from Wimbledon bets; SCOTUS decision could make sports gambling legal in more of US, too 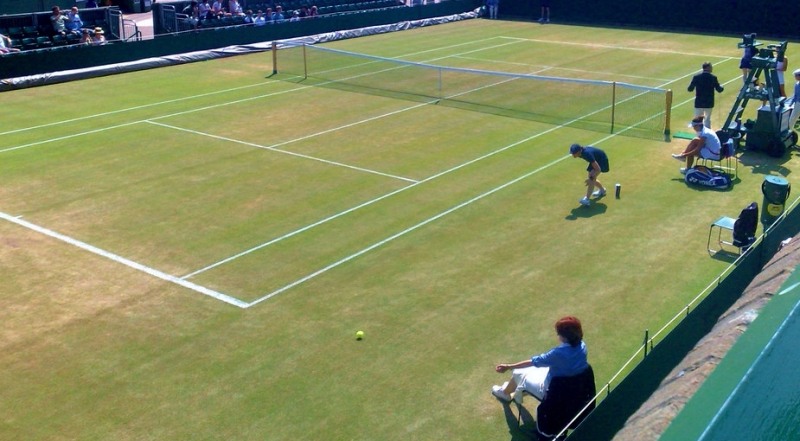 One of Wimbledon's famed grass courts, which are the focus of the tennis — and betting — worlds as tournament matches started July 3. (Photo by Nic Gould via Flickr)

Wimbledon, one of the crown jewels of professional tennis, begins today. You know what that means. Bookies across the United Kingdom are taking bets.

Yes, sports betting is legal in Great Britain. It's also legal in much of Europe.

In England, it's no problem to find the latest Wimbledon betting odds, along with tips on which players to stake your discretionary cash.

The European Union gambling market is estimated to be around 84.9 billion euros ($96.5 billion U.S.) and grows at a yearly rate of around 3 percent, according the European Commission.

Online gambling is particularly popular with around 6.8 million consumers in the EU and a wide variety of operators offer services. In 2012, says the EC, online gambling services represented more than 12 percent of the EU's gambling market, with annual revenues of more than €10 billion ($11.4 billion).

There's similar interest in the United States, despite efforts of lawmakers to limit legal gambling activity, particularly when it comes to sports betting.

But the times, they are a-changing in the United States when it comes to sports betting.

Big, but mostly illegal, bucks in U.S.: This year, Americans bet an estimated $15 billion on Super Bowl 51 and March Madness combined, according to the American Sports Betting Coalition (ASBC).

But most of that money — an estimated 97 percent — was bet illegally, notes ASBC, an advocacy group representing the gaming industry, law enforcement agencies and state and local lawmakers and their efforts to overturn the federal ban on sports betting.

That ban is known as PASPA, or the Professional and Amateur Sports Protection Act, which Congress passed in 1992. PASPA effectively outlaws sports betting in most of the U.S.

Four states that previously allowed sports betting — Nevada, Delaware, Montana and Oregon — were grandfathered into the law. Today, however, Nevada is the only state in which traditional, full-fledged betting on college and professional sports through licensed bookmakers is legal.

Growing public support for legal sports betting: While ASBC officially represents state and other officials, it says it has the support of the general public.

The group points to a recent survey conducted for the American Gaming Association by Greenberg Quinlan Rosner that found more than half (55 percent) of Americans believe it is time to end the federal sports betting ban and empower states to decide whether to allow sports wagering.

"Two facts are clear from this data: Americans love betting on sports and the federal prohibition on sports betting has failed," argues ASBC.

High Court could decide: ASBC and its supporters last month scored a major victory in their effort to repeal the ban when the U.S. Supreme Court agreed Tuesday to hear arguments on whether sports betting should be legalized at racetracks and casinos in New Jersey. Arizona, Louisiana, Mississippi, West Virginia and Wisconsin had joined New Jersey’s effort to have the case heard by the Supreme Court.

The case will be argued during the High Court's term that begins in October.

There's no guarantee that the nine justices will decide in the Garden State's favor. Lowe courts, in fact, have ruled against the state, whose officials contend unfairly blocks the state from expanding legal sports betting options..

But at least N.J. officials get to make their case as to why it should be allowed to authorize gambling on sports at the state's racetracks and Atlantic City casinos. The Supreme Court's decision to hear the case, which it does only about 1 percent of the time, is being heralded as a potential New Jersey victory.

"This is the closest New Jersey has ever been to legalized sports betting," Daniel Wallach, a gaming and sports law attorney with Becker & Poliakoff in Fort Lauderdale, Florida, told NJ.com. "This is a sea change in the whole movement surrounding sports betting in the U.S."

Wider betting options: If the state can convince the Supreme Court to decide in its favor, it could be the start of the end of PASPA.

A ruling for New Jersey would mean all states, not just Delaware, Montana and Oregon which so far haven't joined Nevada in allowing sports betting, would have some soul searching to do. All state officials and their residents would have the option to allow games of chance on sporting events.

The revenue potential of such bets could be a key decider.

With illegal betting, which is what most sports bets are since they can only be made within Nevada's borders, the Internal Revenue Service and state tax departments never see a cent of their rightful portion of those under-the-table winnings.

However, if legalized, the authorized bet payers would report customers' winnings to the appropriate tax offices.

Plus, argues ASBC, state-sanctioned and regulated sports betting would deliver even more tax revenue thanks to the jobs created as legal betting operations set up shop in more states.

The potential for millions in currently missed gambling taxes and other revenue streams could be enough to prompt an expansion of sports betting in some parts of the country.