Do your summer plans include doing a little shopping, either at home or while on vacation? Then you need to know the maximum sales tax rate you might face, especially if you're trying to stick to a budget.

Some states and municipalities operate on a fiscal year that kicks in on July 1. That means tax changes — including levies on sales — often take effect as summer is rolling around. 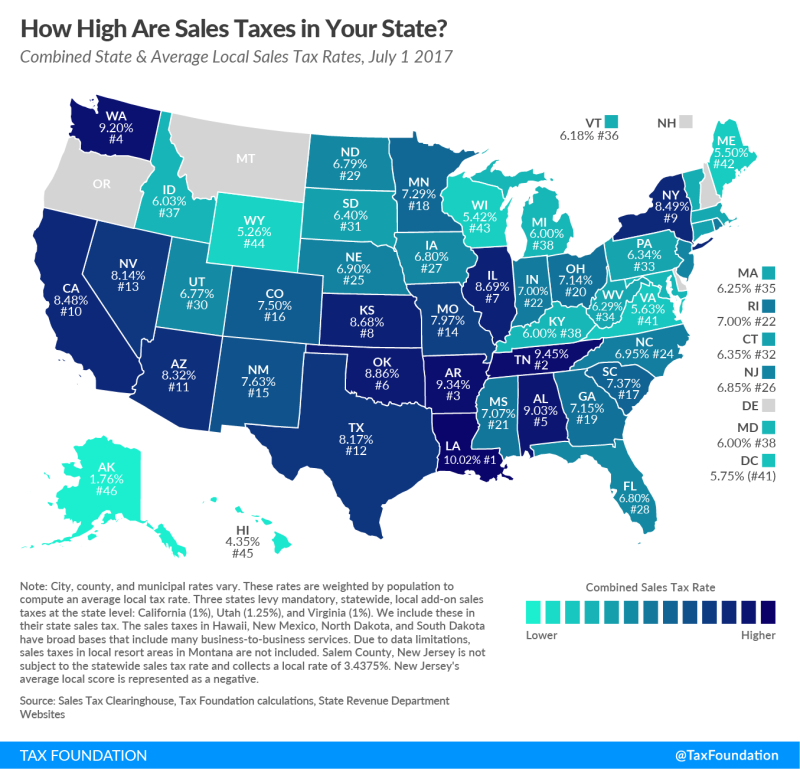 The Tax Foundation notes that 45 states and the District of Columbia collect statewide sales taxes. Local sales taxes also are collected in 38 states. So that means that sales taxes are pretty much unavoidable.

But if you want to head to the ones where you won't have to hand over some extra money to the state and/or local government, the map can serve as a sales tax TripTik.

Highest sales taxes: If you're heading to New Orleans and plan to pick up some souvenirs, take note and take a few more bucks.

Also making the dubious top SALT (state and local tax) list when it comes to sales levies are Tennessee at 9.45 percent, Arkansas at 9.34 percent, Washington at 9.20 percent and Alabama at 9.03 percent.

Louisiana made the combo list because it's also among the five states with the highest average local sales tax rates. The Pelican State, however, is second at the local level.

The five highest local average sales taxes are found in Alabama at 5.03 percent, Louisiana at 5.02 percent, Colorado at 4.60 percent, New York at 4.49 percent and Oklahoma at 4.36 percent.

Lowest sales taxes: If, however, you live in or are planning to vacation in Alaska, Hawaii, Maine, Wisconsin or Wyoming, things aren't quite as SALT-y.

Those states made the Tax Foundation's bottom five for combined sales taxes in the following order, counting down to the lowest:

Of course, you can always head to the five states without a statewide sales tax. They are Alaska, Delaware, Montana, New Hampshire and Oregon.

I hear you. You're asking how Alaska, which has no state sales tax, made the lowest sales tax list. It's because Alaska, as well as Montana, allow localities within their borders to charge local sales taxes.

You can find more details on state and local sales taxes, including some new ones in California, Georgia, Nevada and South Carolina, in the Tax Foundation's full midyear report.