"We looked at healthcare and said let's make sure that we do tax reform better and differently." — House Speaker Paul Ryan (R-Wisconsin) talking about what's next legislatively after the GOP failed earlier today to deliver on its seven-year pledge to end Obamacare. 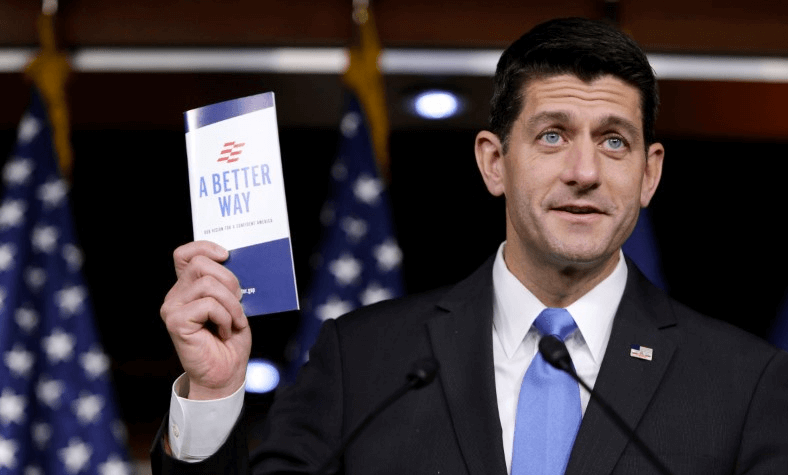 House Speaker Paul Ryan has been pushing his "A Better Way" economic and tax plan for years. Will he finally succeed in 2017 as a Republican-led Congress and White House turn their attention to tax reform?

That, however, is the next major challenge facing Representatives and Senators. And while it's a laudable one, it could be as problematic as the health care debate.

To get there, the Ryan, Ways and Means Committee Chair Kevin Brady (R-Texas), top Senate Republicans and senior White House officials released a statement Thursday, July 27, on where they stand at the beginning of this new effort.

Here are four big takeaways from the 641-word announcement.

1. BAT strikes out: Tax reform 2017 will start later this fall with a loss for Ryan and Brady and others who wanted a border adjustment tax, or BAT. This levy on imported goods also would have created incentives for exporting U.S. companies.

However, neither lawmakers on Capitol Hill, including among Ryan's fellow Republicans, nor the wide array of American businesses and retailers could agree on this tax.

So Ryan et al have agreed to drop BAT from the upcoming tax reform debate.

"While we have debated the pro-growth benefits of border adjustability, we appreciate that there are many unknowns associated with it and have decided to set this policy aside in order to advance tax reform," the statement noted.

2. Regular order for reform: The GOP's effort to repeal and replace Obamacare was done, in both the House and Senate, by that one party. And even most Republican members were kept in the dark about bills until near time to vote on them.

That won't happen with tax reform, at least according to the joint statement. It calls for what is known as regular order, under with legislation is considered the old-fashioned way, being examined by committees, hearings and all, with possible changes being at least discussed if not made, before it goes to a chamber's floor for a full vote by all members.

"[T]he time has arrived for the two tax-writing committees to develop and draft legislation that will result in the first comprehensive tax reform in a generation. It will be the responsibility of the members of those committees to produce legislation that achieves the goals shared broadly within Congress, the Administration, and by citizens who have been burdened for too long by an outdated tax system."

That means while their bosses are off facing constituents during August's Congressional recess, the staff of the House Ways and Means and Senate Finance Committees will be busy coming up with tax reform ideas.

And presumably, at least on paper (or rather, online), that regular order will be bipartisan. Again, let's go to the statement:

"Our expectation is for this legislation to move through the committees this fall, under regular order, followed by consideration on the House and Senate floors. As the committees work toward this end, our hope is that our friends on the other side of the aisle will participate in this effort. The President fully supports these principles and is committed to this approach."

Temporary tax laws, aka the extenders that individuals and businesses have had to cope with for years, make tax planning difficult. Last year, some extenders were let lapse, to the dismay of affected taxpayers.

Even when tax provisions are renewed, it can be particularly annoying when that happens at the very end of a tax year and the rules are made retroactive. Let's get real. On Dec. 28 you can't undo some tax-related business or personal tax move you felt you had to make back in May based on the tax law as it was then.

Will we get tax code permanency so we won't have to deal with short-term tax laws? Maybe. Maybe not. It depends in large part on whether budget reconciliation procedures are used.

Typically, it takes 60 votes in the Senate to avoid a filibuster of a bill. The current GOP majority in the Upper Chamber is not filibuster proof, so it's taken to using reconciliation, which requires, as we saw in the recent Obamacare votes, requires just a simple majority of 51, the final one provided by Vice President Mike Pence.

But under reconciliation, legislation generally cannot create a deficit outside the 10- year budget window. This would mean phase-outs and other timing mechanisms are necessary to meet that 10-year monetary restriction.

Not to get too tax-geeky, but this is why the so-called Bush Tax Cuts were put in place under George W. Bush's administration for a decade only, leading to their expiration, and the increased rates on richer taxpayers, when Barack Obama was in the White House.

And now, without the tax money that would have come from eliminating many Affordable Care Act taxes, tax reformers must grapple with the budgetary effects of any Internal Revenue Code rewrite.

Theoretically, tax reform is possible that would not increase the deficit over the next decade. Realistically, that's very difficult, since it would require raising revenue somewhere.

It's always problematic to raise revenue taxes. It's even harder in a midterm election year, which is what 2018, the year the tax reform would likely take effect, is.

So rather than hassle with juggling numbers for the long haul, this presidential campaign promised version of tax reform might have some temporary tax provisions. Oh joy.

4. No numbers yet: One of the reasons that it's not clear just how much of tax reform will be permanent or temporary is that neither lawmakers nor their statement on the process are yet talking numbers. At least not officially.

The statement on tax reform says its issuers' mission is to "make taxes simpler, fairer, and lower for hard-working American families." That's cool.

But while it says, "We have always been in agreement that tax relief for American families should be at the heart of our plan," there's no further mention in the statement of individual taxes.

That's probably because that even within the Republican Party, which controls the House, Senate and white House, there's no agreement on tax rates, either individual or business.

Donald J. Trump has called for a new corporate rate as low as 15 percent, down from the current 35 percent. That, however, would explode the national debt.

Most Congressional Republicans, however, have proposed a 20 percent top business tax rate. Some support a 22 percent rate

Steve Bannon, Trump's primary populist adviser, appears to be further bucking GOP orthodoxy by calling for an individual tax rate hike for higher earners. Bannon reportedly supports paying for middle-class tax cuts with a new top rate of 44 percent for those who make more than $5 million a year.

Ryan's own "A Better Way" tax plan, on the other hand, calls for reducing the current tax rates from seven to three: 12 percent, 25 percent and 33 percent.

These disparate numbers on just the GOP side and how they might affect the federal debt is why there are no hard numbers yet. And we've yet to consider that Democrats, if included in the regular order process, will argue for their own tax cuts and revenue raisers that are dramatically different from their Republican colleagues.

So what's my best tax reform tax advice for now? Rest up while Congress is on its late summer vacation. You'll need all your energy to follow tax reform when the process starts later this year.