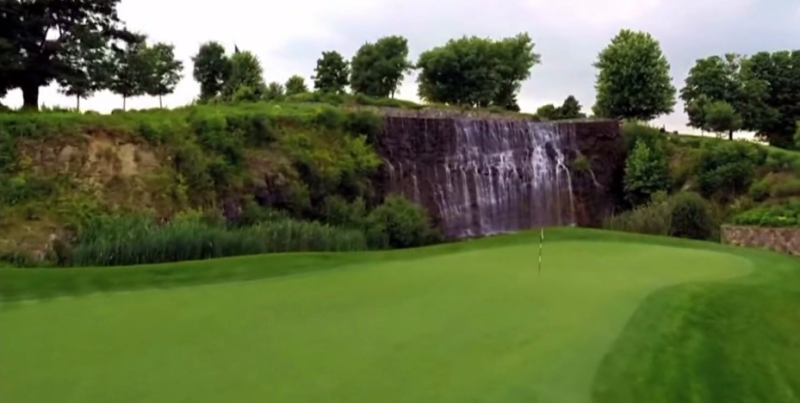 The spectacular hole 13 waterfall at Trump National Golf Club in Westchester, New York, is one of the things that makes the property so valuable. But Donald Trump's attorneys say that property appraisers have set the price too high, at least when it comes to the value that determines the course and club's annual real estate tax bill.

While Donald J. Trump was watching the USGA tournament at his Bedminster, New Jersey, golf club (where most summer weekends he plays golf), his attorneys around the country were working on ways to lower property taxes on some of his other courses.

But they've been spending a lot of their weekdays trying to get city and county officials in seven states to reassess the taxable value of Trump golf resorts.

Another Florida tax lawsuit: Last week, Trump's tax lawyers sued the Palm Beach County property appraiser and the head of the Florida Department of Revenue, claiming the Trump National Golf Club in Jupiter, Florida, isn't as valuable as they think.

Trump said in his 2016 and 2017 campaign financial disclosures that the South Florida golf club is worth more than $50 million.

And while the latest lawsuit doesn't suggest a dollar amount, Trump's legal staff obviously don't agree with either their boss' or the county's valuations when it comes to taxes.

Trump's battle over the taxable value of the course just north of his Mar-a-Lago estate is an annual rite of summer.

"Each July since 2014, Trump has sued the property appraiser to contest the valuation of the course," according to Palm Beach Post business reporter Jeff Ostrowski. "In the original 2014 suit, Trump said the taxable value of $25 million far overstated the golf club’s true worth."

Why such divergent amounts when it comes to 18 holes and their resort accoutrements?

Ostrowski explains that a commercial property appraisal gauges the value of the real estate underlying a business, but it doesn't reflect the full value of an operation such as Trump's golf club.

Tax challenges nationwide: The Jupiter property tax fight is not the only one Trump is waging.

The president has 12 golf courses and resorts bearing his name across the United States. There are three each in Florida and New York; two in New Jersey; and one each in California, North Carolina, Pennsylvania and Virginia, just outside Trump's new home in Washington, D.C.

The CBS affiliate in Miami reports that Trump has fought tax assessments on all of his U.S. golf resort properties except the one used these last four days by the women professional golfers.

Why no battle over Bedminster's value? Because Trump already gets a farmland tax break for having goats on the property.

Legal, but questionable PR: Let's be clear. What Trump and his lawyers are trying to do — reduce property taxes — is legal and something that all property owners are entitled to do. In fact, we all should make sure that our property taxes are correct and if not, appeal them.

Heck, money machine Disney also is fighting with Florida tax collectors over how much Mickey's Sunshine State real estate is worth.

And yes, even the agriculture-related tax break is on the up-and-up and often used by people, celebrities and regular folk, who have never dirtied their hands doing any kind of soil related work.

But when someone is making millions — or says he is <cough, tax returns, please, cough> — then maybe that millionaire might want to think about how his/her taxes support the local governments. Property taxes are the main source of public school funding across the country.

Again, I get it. We all should pay the least legal tax we owe.

Sometimes, though, fighting over every single penny, especially when you say you have so many of them, just looks plain greedy.