Every financial adviser recommends that we all keep close eyes on our retirement plans, either by reallocating our investments or contributing more money throughout the year.

Just last week, in fact, I put contribute to your retirement accounts on my list of 6 tax moves to make in July. 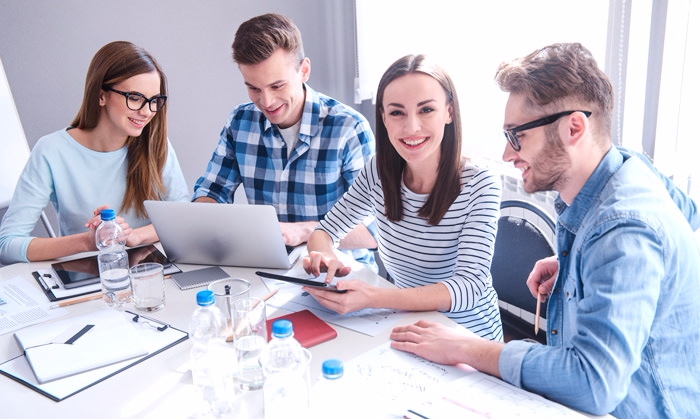 Whether you're a young worker like those in this group or an older employee, take full advantage of your workplace's retirement plan.

I felt like a bit of a nag, but apparently, folks — especially younger workers — need the constant reminding, especially when it comes to defined contribution plans such as 401(k)s.

Missing out on retirement savings: A new report from Wells Fargo Institutional Retirement and Trust shows that workers in all age groups are leaving valuable retirement money on the table.

Most employers pitch in a percentage of the amount that workers put into these defined contribution plans. The smartest move if your budget allows is to contribute at least as much as your boss will match.

Around a quarter of Baby Boomers, however, aren't doing that. For Gen Xers, 31 percent are missing their bosses' maximum matching contributions. And 37 percent of Millennial employees are forgoing retirement money.

In both categories, younger, more recently hired and lower earning employees are the least likely to open a 401(k) plan or, if enrolled, contribute as much as they are allowed to it.

There is, however, some good news.

The Wells Fargo analysis found some gains in average contribution rate over the past five years, particularly among Millennials. 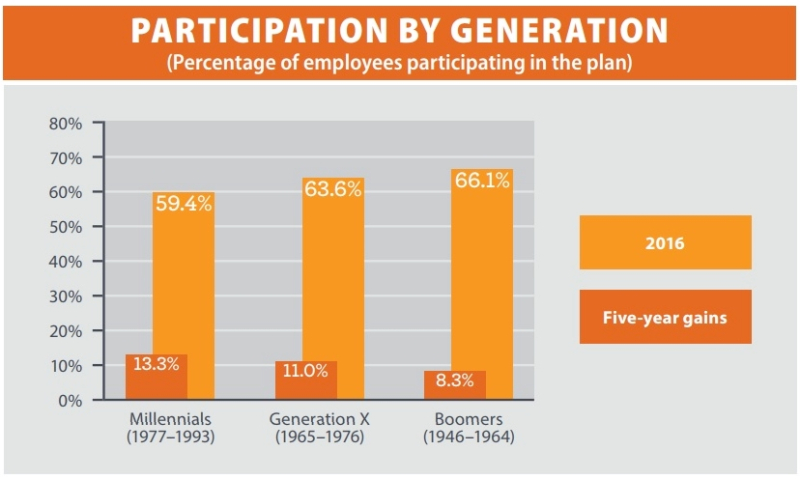 Boomers are still participating more, but a larger percentage of Millennials over the last five years has been contributing to workplace plans. Good for these kids today!

Auto enrollment helps a lot: The Wells Fargo study was designed to help companies design or refine their retirement plans to address employee needs. Obviously, the generational considerations mean that there are a lot of variables.

But one consistent is that automatic enrollment is one of the most effective tools in getting workers to take responsibility for their future retirement financial needs.

Average participation for plans with automatic enrollment exceeds 80 percent, according to the Wells Fargo data, while plans without it have less than 50 percent participation.

It's also a good idea in many cases, says the financial institution, to automatically enroll all eligible employees, not just new hires.

In a 2012 to 2015 comparison of feelings folks have about their retirement plans, people are less anxious and in fact more confident, even optimistic, about their nest eggs. 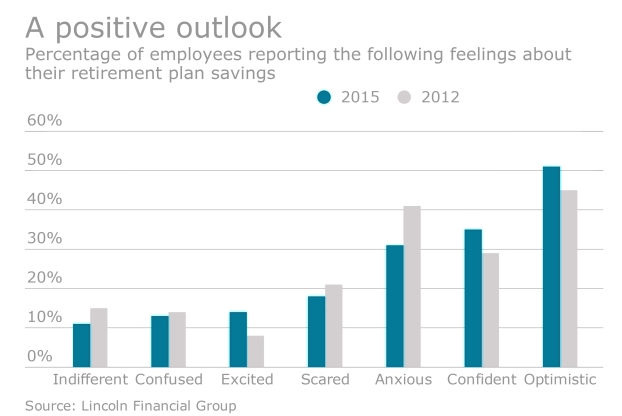 Retirement contribution maximums: Are you among those adding more to your workplace and individual retirement plans? Good for you.

If you aren't and want to maximize your contribution amounts, here are the 2017 tax year maximums per the Internal Revenue Service inflation adjustments:

The workplace plans typically are tax-deferred, meaning that the money goes into your retirement account before taxes are taken out of your check. That means that you'll owe taxes on the money when you eventually withdraw it. But the hope is that by then you'll be in a lower tax bracket.

Some companies, however, do offer Roth plans, where taxes are paid on the account money, but qualified distributions are tax-free.

Evaluate and participate: Examine all the workplace retirement plan options and how they fit with your personal financial needs before making a choice. But do pick one and contribute!

Your active involvement in your retirement savings has become an increasingly important part of the traditional three-legged retirement stool.

You also can find more important amounts, such as income limits on traditional IRA deductions and in the ol' blog's look at retirement-related inflation changes for the 2017 tax year.

The maximum allowable contributions amounts are a lot, especially for lower-earning workers. But if you can swing at least some retirement contribution, do so.

And when you get a raise, increase your workplace plan contribution amount, too, so that you at least get your employer's full matching contribution.

A little budget tightening now when you're younger could make a big difference in how enjoyable your post-work lifestyle will be.

Employers should provide their employees opportunities to save money which they will earn as retirement money. There are many ways to save money. Insurance companies offer people different plans to save money.

Glad to see there's expectation that millennials will continue to invest in the near future.

Auto-enrollment definitely seems to help. Beyond that, it's difficult to say where people are falling short. Are they not contributing because of student loans, a bias/misunderstanding of what constitutes Investing (hint: it's not gambling...that's called stock picking :)), the stagnant wage and underemployment hangover from the Great Recession?

I say it's a combination of all of them. But it's not balanced. Young people are either paralyzed by the aftermath of 2007-09, or they're overconfident because their money has only grown (thanks to the second longest bull market in history).

The habit of saving, that's the hard part. That's the part that takes discipline, planning, thought, sacrifice. Once you understand that the rest doesn't seem so intimidating.