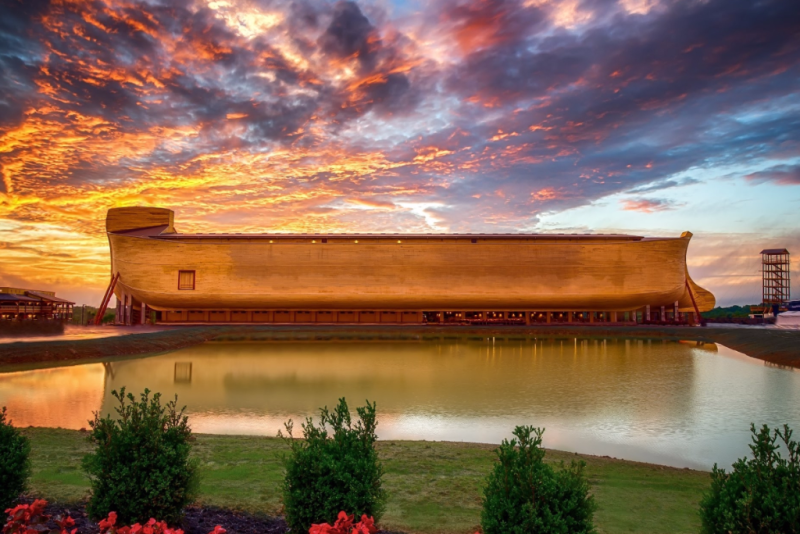 Ark Encounter's replica of the vessel used in the Biblical tale of Noah and the flood is the largest timber frame structure in the world, according to the Kentucky theme park's website. It is 510 feet long, 85 feet wide and 51 feet high.

Ark Encounter, the evangelical/fundamentalist Christian theme park in Grant County, Kentucky, will have to stay afloat without the aid of $18 million in state tax breaks.

The Kentucky Tourism, Arts, and Heritage Cabinet sent the operators of the park, which features a massive replica of Noah's Ark, a letter last week notifying them that the park would no longer get the government subsidies. The incentive program lets developers of qualified tourism projects recover up to 25 percent of a project's cost through a return of sales tax paid by visitors on admission tickets, food, souvenirs and other expenses.

State officials revoked the tax relief that Ark Encounter receives effective June 28 because, according to the letter, that day the park breached the tax agreement by transferring the property from a for-profit company to a nonprofit enterprise.

Years-long tax relief effort: This is the latest fight in the battle for tax subsidies for the Northern Kentucky theme park, dubbed the Ark Park because it features a 510-foot-long model of the Biblical flood ship.

In 2014, Kentucky officials refused to provide the tax breaks because of concerns about public money for religious activities.

Two years later, after a federal lawsuit, a change in the Kentucky governor's office and new appointees to the state's Tourism Development Finance Authority board, the millions in tax breaks were granted to Ark Encounter.

Transfer transgression: The official letter says state officials learned July 10 that owners had transferred the park from Ark Encounter LLC, a for-profit company, to Crosswater Canyon, a nonprofit subsidiary of Answers in Genesis. The transfer price was $10.

Yep, 5 + 5 = 10 dollars. No other zeros. But the low cost is not an issue. Rather, it's the operating structure of the new management group.

By selling the land to its nonprofit counterpart, the park would be exempt from property taxes. It also, could mean it would not be subject to the safety tax that Williamstown, Kentucky, enacted in April.

This 50-cents-per-ticket levy applies to tickets sold at Ark Encounter and the Williamstown Family Fun Park. The new tax revenue will be used for the city to upgrade its emergency equipment, which would be needed if it has to respond to an emergency at either attraction.

But by avoiding those taxes, the Ark Park now faces loss of the other tax savings.

If the property is deeded back to the for-profit entity within 30 days, Kentucky tourism officials say the original tax incentives will be restored.

The tourism cabinet also noted that a nonprofit may qualify for a Tourism Development tax incentive. But, notes the letter to Ark Park officials, such groups must go through the tax relief process like every other entity.

Park says it's innocent: Ark Encounter management contends it has done nothing wrong.

"We don't believe that the transfer of the property created a default, but we will comply with the concerns that the tourism department may have related to the transfer," theme park spokesman Mark Looy told the Courier-Journal.

Looy added that Ark Park officials "look forward to maintaining a positive relationship with the state long into the future."