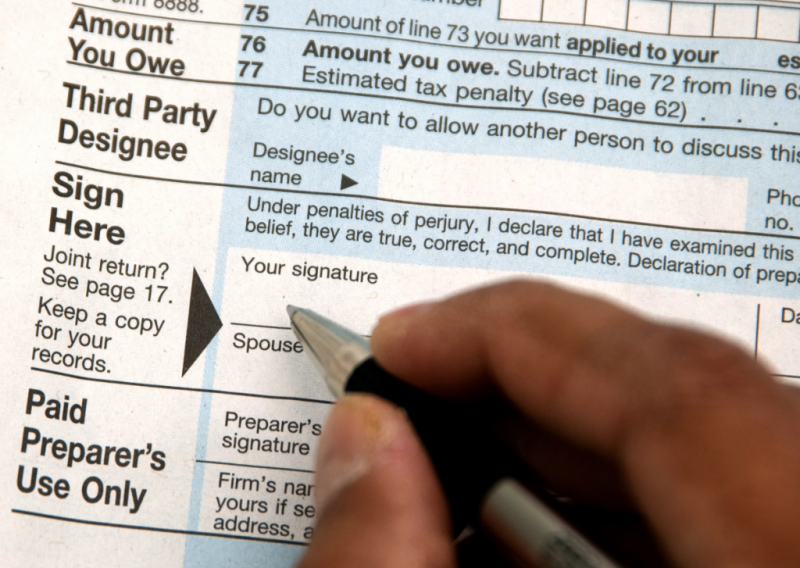 Paid tax return preparers must sign their clients' 1040 forms and include their IRS-issued professional ID number. The IRS lost a court case to charge a fee for the identifiers, known as PTINs, but is seeking a stay of that order pending possible appeal of the case.

If you're a tax preparer who's hoping to get back fee you paid for your IRS-issued special identification number, you could be waiting a bit longer.

The Internal Revenue Service on July 24 formally asked the U.S. District Court for the District of Columbia to stay its injunction prohibiting the IRS from charging PTIN fees.

The legal action was not a surprise. Earlier this month the IRS said it would be taking this action following the federal appellate court's June 1 ruling that while the IRS can require tax preparers to get the special ID number, it has no authority to charge for it.

Following the decision, the IRS shut down its online tool that issues or renews Preparer Tax Identification Numbers, or PTINs.

A couple of weeks later, the IRS reinstated the PTIN online option, but it is no longer collecting fees for the digits that professional tax preparers must use when they file clients' tax returns.

PTIN legal maneuvering: Now Uncle Sam's tax agency and Department of Justice (DoJ) have asked the federal appeals court for a stay of the order that the IRS stop collecting PTIN fees.

The request was part of the joint status report on the case filed June 30 with the D.C. court and reported by Tax Analysts' Tax Notes.

The last of eight items in the case's report, the stay mention specifically says:

The tax agency's lawyers followed through on July 24.

Taking in fees until case is final: The IRS reiterated in its memorandum in support of its request to resume PTIN fee collection that it has not yet decided whether it will appeal the court's decision. But during the determination of further legal action, the IRS wants to collect the fees from preparers.

The agency also wants to collect PTIN fees during the full appeals process if it does indeed seek reconsideration of the Steele decision.

In arguing for continued fee collection, the IRS says that if it does appeal and wins, it won't have any way to collect the "likely tens of millions of dollars" in fees that the injunction halted during additional legal action.

The IRS also argues that if it is not allowed to collect the identification number fees, it will have to use money from other agency programs to fund the PTIN program. That diversion of funds, says the IRS, will reduce its ability to provide other taxpayer services.

However, if the IRS decides not to appeal or does so and loses, it argues that it can simply refund the fees collected during appeal.

During an address at the annual conference hosted jointly by the IRS and the Urban-Brookings Tax Policy Center and reported by Law360, Koskinen said his agency is likely to appeal the PTIN ruling.

The reason the IRS is so committed to PTINs, noted the commissioner, is that the public, especially among the elderly and in low-income and immigrant communities, can be vulnerable to abuse by tax preparers.

Working with Congress, White House: Koskinen acknowledged that IRS' authority, particularity when it comes to the PTIN fees, is problematic. To clarify the matter, the commissioner said his agency is working with Congress in the hopes of getting legislation passed that would clearly grant the IRS the ability to require certain minimum standards for preparers.

Since the Tea Party tax-exempt status scandal, the IRS in general and Koskinen in particular have had a contentious relationship with Capitol Hill. Some Republican House members have been trying for years to have Koskinen fired, going so far as to seek his impeachment and succeeding in having the commissioner censured by the House Oversight Committee.

However, changes that benefit the IRS might be more possible under the new Administration.

Koskinen didn't specifically mention the matter of fees involved in accreditation of preparers, but he did allude to it in referencing IRS resources. The current tax agency chief, like many prior IRS commissioners, has continued to battle Congress for funding the agency says is critical to doing its jobs, both in collecting taxes and providing services to taxpayers.

Regulating bad tax preparing apples: "Our hope is that as … some tax legislation goes forward, that the Congress will understand it is critical that taxpayers get some protection in terms of dealing with tax preparers and that we have the authority to actually be able to run this program without eroding further the resources we have," Koskinen said.

As always, the commish also was careful to point out that the "vast majority" of tax preparers are honest and conscientious about following the law.

"But there are enough [preparers] out there who either don't know a lot about what they’re doing or consciously are trying to take advantage of taxpayers," added Koskinen. "I think it is important for there to be some minimum requirements for preparation."

If the IRS does appeal the Steele ruling and loses, or ultimately decides not to appeal, it could be looking at PTIN fee reimbursements of up to $300 million.

Thanks for the information.