Foxconn promised $3B in tax breaks to build Wisconsin plant

UPDATE, October 19, 2020: "For two years, the company, aided by the vocal support of the Wisconsin GOP, worked to maintain an illusion of progress in front of a business venture that never made economic sense," writes The Verge in its examination of the failed Foxxcon deal. Now, Wisconsin officials say Foxconn's scaled-back factory won't get tax credits. 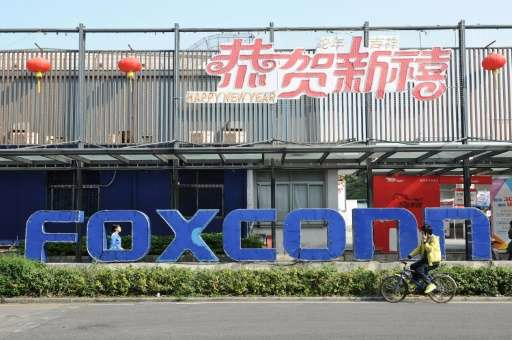 Are you worried that your next iPhone will cost more than you planned now that Foxconn is opening a plant in Wisconsin? The Taiwanese electronics supplier will be paying U.S. employees much more — an average of almost $54,000 a year plus benefits annually — than workers who put together Apple products in China.

Don't be. Foxconn's American operation won't be making smartphone components. Instead, it will produce liquid-crystal display panels for televisions and computer screens.

But Wisconsin taxpayers, regardless of whether they buy any of the products with Foxconn made in the USA parts, could end up paying anyway.

It remains to be seen, however, if the company will get the money. Folks across the political spectrum say the tax subsidies are simply too large.

ROI questions on big tax break: Based on preliminary estimates of the plant's capacity, tax experts say the tax breaks would amount to $15,000 to $19,000 per job annually.

That compares with $2,457 per year in the usual incentive arrangement, Timothy J. Bartik, a senior economist at the W.E. Upjohn Institute for Employment Research in Kalamazoo, Michigan, told the New York Times.

And that differential could be a problem.

The announcement of the Foxconn facility has drawn the praise of Gov. Scott Walker and other state officials, as well as the White House. They and other advocates of the deal say the arrival of the high-tech manufacturer is key to recapturing the economic gains Wisconsin lost with the closures of so many factories.

Others are not convinced the state and its residents will get a good return on such a large tax investment.

If Foxconn does get the full $3 billion, which is predicated on it living up to its hiring and investment parts of the deal, the outlay will be the fourth-largest tax incentive deal in U.S. history, according to Greg LeRoy, executive director of Good Jobs First, a Washington, D.C., based nonprofit research group that tracks economic development subsidies.

"We can only describe this as a gift from Wisconsin taxpayers to Foxconn shareholders," LeRoy said. "This is a guaranteed loser for the state."

Money out, money back…maybe: Supporters of the move say it's worth the tax cost. In a fact sheet detailing the advantages of the Foxconn package, the $3 billion will be parceled out as:

An exact location has not been determined. Foxconn is looking at sites in Racine and Kenosha counties.

Whichever location gets the nod, once the 20 million square foot facility — large enough, Green Bay Packers fans, to hold 11 Lambeau Fields — will be one of the largest manufacturing campuses in the world, besting the Tesla Gigafactory in Sparks, Nevada, and the Boeing facility in Everett, Washington. (Both of those operations, by the way, also got tax breaks from their respective states.)

Around 13,000 workers will be based at the complex, which will pay an average salary of $53,875 plus benefits.

Other workers also will benefit, according to state officials. Around 10,000 construction jobs will be created over each of the next four years, as well as another 6,000 indirect jobs from the construction. The capital investment during construction is expected to generate $348 million in state and local tax revenues.

As for ongoing economic impact, fans of the Foxconn project say:

Not everyone's sold: But first, Wisconsin lawmakers must meet in special session and OK the $3 billion outlay for Foxconn. Those billions are this week's By the Numbers figure.

It could be a hard sale, since similar economic development benefits promised by Foxconn, both in the United States and internationally, have not materialized.

Plus, say opponents, Walker's eagerness to hand out tax dollars doesn't jibe with his prior fiscal conservatism.

"It doesn't fit with a governor that said we can't spend much money," Martin Baily, a senior fellow at the Brookings Institution and a member of President Bill Clinton’s Council of Economic Advisers, told the New York Times. "This is a guy who decimated the University of Wisconsin by budget cuts. On the one hand, he's saying we can spend billions to pay Foxconn, but what about our own prized educational institution?"

Jared Walczak, a senior policy analyst at the Tax Foundation, also notes that by giving Foxconn such a big tax deal, the state is "forgoing the opportunity to make a more competitive landscape for other businesses."

Carl Davis, research director at the nonpartisan Institute on Taxation and Economic Policy in Washington, D.C., agrees: "This is not a comprehensive strategy for economic development. If Wisconsin were going to offer this kind of subsidy for every employer within its borders, the state would be bankrupt."

I really enjoyed the blog because you arranged every fact in a very beautiful manner which gives it a look of series in which topics are connected amazingly. Nice work.