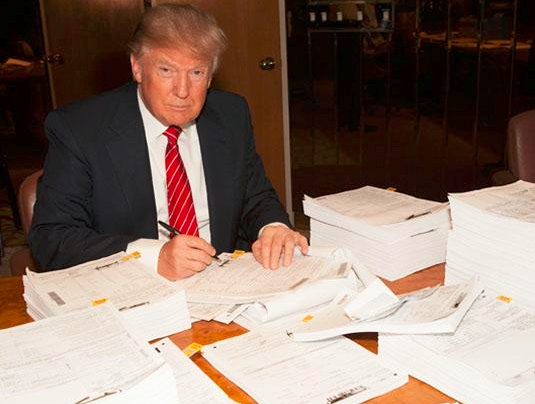 Take a look at this Twitter post by Donald J. Trump back in October 2015 of his purported 2014 tax return documents. That's still as close as we've gotten to seeing any of the president's tax filings.

We got word about Donald J. Trump's 2016 taxes over the weekend.

No, he didn't share them with the public. In fact, Trump is making even the country's tax collection agency wait to see them.

The president has, like millions of other taxpayers, filed for an extension to finish filling out his 2016 tax return.

All we've got is time: Both NBC and CNN reported the filing extension over the weekend. The White House subsequently confirmed that the prez sent the Internal Revenue Service Form 4868, Application for Automatic Extension of Time To File U.S. Individual Income Tax Return, but offered no other details.

Presumably, that request was submitted by April 17, along with any due tax Trump and Melania, with whom he's filed joint returns in the past, owe. After all, even the commander in chief must comply with U.S. tax laws.

And although some media outlets pointed out that the White House gave no reason for the extension request, it must be noted that no taxpayer, be it regular filers like you and me or the leader of the free world, has to offer an excuse reason. The six-month extension is granted automatically as long as is it sought in a timely manner, that is, by the April filing deadline.

Return hints, but no documents: Last month, Trump attorneys released a letter asserting that the past 10 years of the businessman-turned-politician's federal tax returns don't show any income from Russian sources … "with a few exceptions."

Those exceptions are payments related to a Trump-owned beauty pageant which was held in Russia and the sale of a piece of Florida property.

As for getting a look directly at what's on that decade of forms (or 1040s), don't count on it.

The day before the Russia income tax return letter was released, The Economist published an interview with Trump in which he repeated his belief that "nobody cares about my tax return except for the reporters."

He did add, however, that he might release his taxes after he serves out his term(s).

Take your tax time: Are you among the millions who joined Trump in seeking more time to file your 2016 tax forms? That's cool.

In fact, it's a good idea if you don't have all the info you need to complete your 1040 and association schedules. It's better to take your legally allotted extra time and do the job right rather than to file in haste and make a potentially costly mistake or have to file an amended return.

The countdown clock in the ol' blog's right column can help you keep track of how much extra time you still have to finish this tax task. As of today, Monday, June 05, you've got less than 134 day to meet the Oct. 16 deadline. Yes, it's a day later this year since Oct. 15 is on Sunday.

You also can check out the Weekly and Daily Tax Tips — links to them also are in the right column — to help you find all the tax breaks to which you're entitled. The deductions or credits or other claims could help when you finalize your forms, perhaps helping you realize that you overpaid your guesstimated tax bill back when you sent in your extension request in April.

Getting some of that money back would be almost as good as — OK, really better than — seeing Trump's 1040s.

I was more than happy to find this web site. I need to thank you for your moment due to this unbelievable read!! I definitely savored every bit of it and I have you book-marked to see new things in your web site.