Tropical storm season 2017 heats up. It's time to get ready physically, fiscally and tax wise

That colorful glob pictured above is Tropical Storm Bret. It formed this afternoon, kicking the 2017 Atlantic-Gulf of Mexico hurricane season into a higher gear.

While images from the National Oceanic and Atmospheric Administration can give us — and by us, I mean professional meteorologists — an indication of a storm's strength, what you and I really want to know is where the heck is this mess?

Tropical Storm Bret is born: The purple map lines in the image are a bit hard to see, but my U.S. readers can breathe easy, at least for now. Bret is off the coast of Venezuela. Sorry, South American readers.

The National Hurricane Center graphic below gives us a better idea of just where Tropical Storm Bret is situated and where it might go in the next few days. Sorry Central American readers. 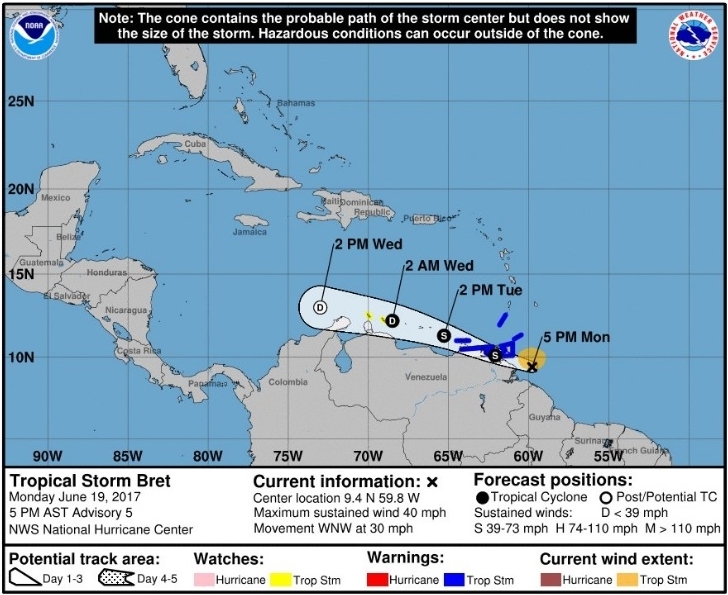 The bigger concern for us in North America, particularly for residents along the Gulf of Mexico, is potential tropical disturbance #3.

Yep, that's the official name right now, Monday, June 19, early evening. The system hasn't coalesced enough to warrant even being designated by the NHC as a tropical depression.

Waiting for another possible storm: But keep your eyes on #3.

As the NHC graphic below issued this afternoon shows, it could become a tropical storm — the next name on the 2017 list is Cindy — and make landfall anywhere from the east Texas Gulf coast to western coastal Louisiana. 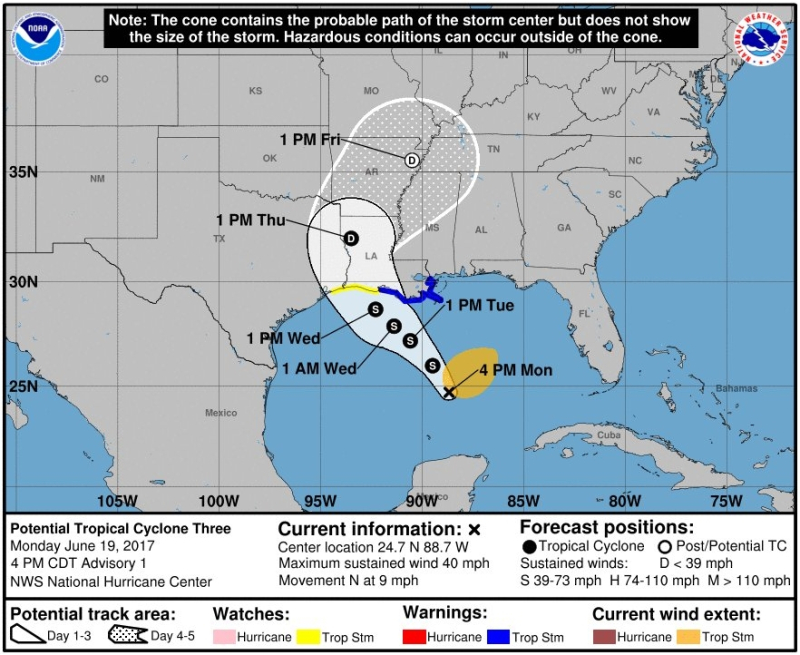 Use lull to get ready: Yes, Bret is not an issue for U.S. residents. And it's too soon to tell when, where, how strong or whether #3 even will become Cindy.

That's why it's the perfect time to get ready for hurricane season, which officially kicked off June 1. A subtropical system actually formed in May, taking the season's first moniker as Tropical Storm Arlene.

When there's no danger, you have plenty of time to get your finances and property ready for any impending storm.

Plus, grocery shelves are full of the items you'll need. Stock up now, so that you don't have to fight other frantic shoppers over the last loaf of bread or can of tuna or case of bottled water with a hurricane heading your way.

You also need to make some storm-related financial moves, like double checking your insurance coverage or getting a policy if you don't have one. In most states, insurers won't issue a policy when a storm is nearing your location. Also do a pre-storm inventory, just in case you need the info to file an insurance claim.

Make sure you have or start a recovery account. While you can claim storm losses on your tax return  — and possibly amend a filing to get tax relief cash back sooner if the storm is declared a major one — you'll still need to pay some upfront post-hurricane costs.

You can find my many previous posts (including the ones linked in the previous paragraphs) on these storm preparation and recovery considerations on the ol' blog's special Natural Disasters resource page. Check it out now, too, before you're glued to your TV or computer screen tracking the path of a storm.

Be safe! And most of all, stay safe.

If your local and state officials say evacuate, get out. You'll know just where you want to go to await the storm's passage if you plot out your hurricane evacuation route now, too.