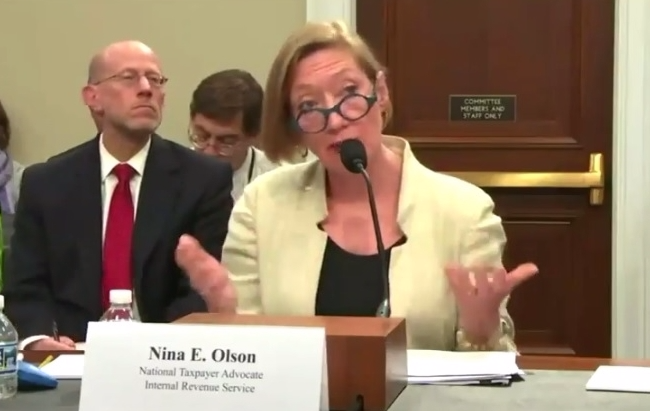 National Taxpayer Advocate Nina E. Olson has long been an opponent of turning over taxpayer accounts to collection agencies. That's still the case, according to her mid-year report presented today to Congress.

The latest private tax debt collection effort tops the list of 13 priorities that the Taxpayer Advocate's Service will focus on during the coming 2018 fiscal year that begins Oct. 1.

Specifically, Olson says she and her staff are concerned that using bill collectors will disproportionately burden financially strapped taxpayers. On the government side, Olson's report also cites concerns that the program will cost, not benefit, Uncle Sam's bottom line.

Collection pushing some taxpayers deeper into debt: Olson, during testimony before a House Appropriations Committee subcommittee on May 23, told lawmakers that insufficient analysis of taxpayers' financial situations could result in some owing taxpayers, at the urging of private collection agencies (PCAs), enrolling in installment payment plans they cannot reasonably afford.

"This problem will grow worse when PCAs, driven by the prospect of earning commissions, are allowed not only to place taxpayers into installment agreements (IAs), but also to 'restructure' IAs, all without ever gathering financial information for the IRS to consider," said Olson a month ago.

She reiterates those concerns in today's report.

Low-income accounts sent to collection: Olson's office this spring reviewed taxpayer accounts assigned to PCAs and found that 23 percent of those individuals reported incomes below the federal poverty level. In addition, 53 percent reported incomes below 250 percent of the federal poverty level, which is the low income threshold at which a person can get assistance from a Low Income Taxpayer Clinic.

Based on these figures, Olson says she "remains concerned that PCAs will pressure taxpayers who cannot afford to pay into doing so." Exacerbating her concern, added Olson, is the inability of PCAs to view the tax debt as part of the taxpayer's larger financial circumstances.

Under the current system, however, Olson says that "because PCAs are paid a percentage of what they collect, there is a financial incentive for them to pressure even low income taxpayers from whom the IRS ordinarily would not collect to make payments."

Other tax costs: In addition, Olson says the system in place for private collection doesn't pay off in the long term.

She pointed to a recent Taxpayer Advocate Service study that found the IRS is more likely to collect self-reported liabilities than other types of assessments. "For example, it collects self-assessed liabilities at a rate at least twice as great as it collects audit assessments," according to Olson's report.

Overall, notes Olson, the IRS benefits from the PCA arrangement because it will keep up to 25 percent of the amount the agencies collect. That money will be used for hiring and training tax compliance employees.

But while the collection agencies and IRS benefit from the current procedure, says Olson, the public treasury doesn't.

During coming fiscal year, Olson says her office will take additional steps to ensure the protection of taxpayer rights under the private tax debt program. Her office also plans to advocate exclusion of Social Security recipients with incomes below 250 percent of the federal poverty level from assignment to collection agencies.

Other worrisome tax areas: While PCA tactics and potential financial threat to taxpayers led Olson's list of priorities, she has a dozen more concerns.

Here's the full list of what the Taxpayer Advocate will be keeping a close eye on in the coming fiscal year.

Looking at this list, it appears that the National Taxpayer Advocate also has given herself and her staff much more work in the coming fiscal year to keep the IRS on track to better serve taxpayers' needs.

You can read more about all of these priorities in Olson's full mid-year report .