Georgians who usually delay their back-to-school shopping until the end of July when the state's annual tax-free shopping weekend rolls around can go ahead and buy on their own timetable this year. 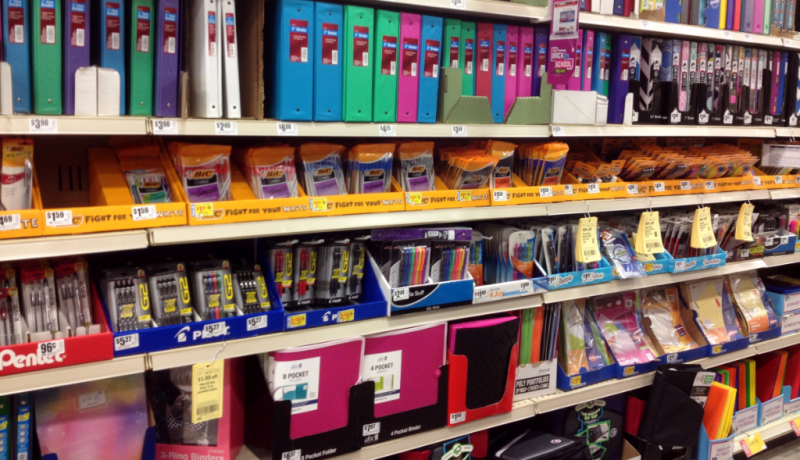 Every summer, shoppers in around a dozen states can buy sales tax free school supplies thanks to tax holidays. That's not the case this year in Georgia, which has canceled its 2017 tax-free weekend event. (Photo by Kay Bell)

The event had been penciled in for the weekend of July 29-30. Get out your taxable erasers, Georgia shoppers, and remove it from your calendars.

Dollars rule: The reason for ending the event is the same one that attracted shoppers — saving money.

Last year, the governor's Office of Planning and Budget estimated that Peach State shoppers would save as much as $74.5 million.

"That's a sizable chunk of change when communities are struggling to fully fund their public schools or keep their local hospital from closing," Wesley Tharpe, research director of the Georgia Budget & Policy Group, told the Atlanta Journal-Constitution.

In past years, tax-exempt items included clothing and footwear with a sales price of $100 or less per item.

Not the first time: Some Georgia shoppers no doubt will be upset, but it's also not a surprise.

Georgia's tax holiday tradition started in the early 2000s, but lawmakers have suspended the sales tax event before.

The summer holiday was discontinued briefly when Georgia was feeling the effects of the Great Recession later that decade.

More shoppers, or simply shifting shoppers? While shoppers did save some dollars, opponents of sales tax holidays say they hurt state and local bottom lines and really didn't produce any added shoppers. It simply consolidated their shopping activity.

"They are going to buy computers and supplies for school, and what the sales tax holiday did was it concentrated that activity -- but it didn't create any new activity," added the Republican representative from Camilla, who chairs Georgia's House Ways and Means Committee.

Retailer reaction to the loss of the back-to-school sales tax holiday was more mixed.

Some store owners believe it will produce a drop in purchases, particularly of more expensive items like computers. Others agree with Powell's assessment that shoppers will buy what they must for their children's school needs with or without a sales tax break.

Traveling for a tax break: Some business owners, however, fear that some shoppers, especially those who live in border towns, might decide a short trip to neighboring states is worth the tax savings.

When we all get back from the July 4th holiday, I'll post my annual look at all the states that will still be holding tax holidays in 2017. You can get an idea of what to expect this year from the 2016 tax holiday schedule.