Donald J. Trump's got a lot of campaign promise policy issue irons in the fire. This week, he pulled one out a bit by deciding to let undocumented residents known as DREAMers stay in the United States.

The decision was announced as part of a fact sheet released by Homeland Security late June 15. That document's next-to-last line notes:

"The June 15, 2012 memorandum that created the Deferred Action for Childhood Arrivals (DACA) program will remain in effect." 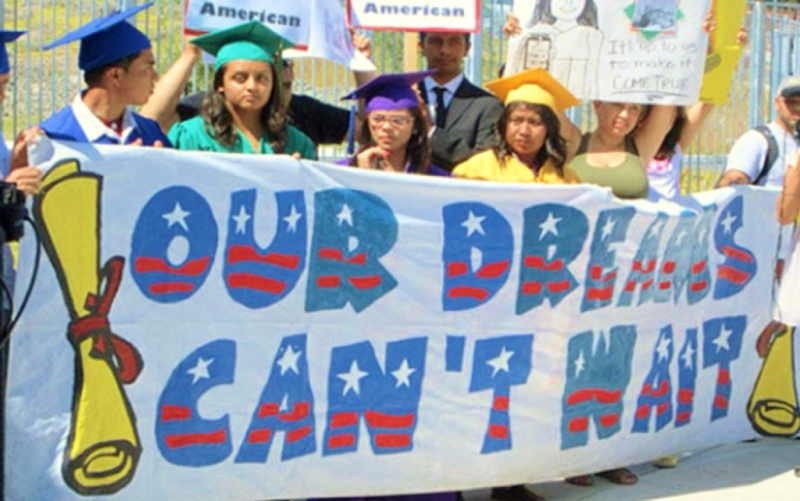 A group of DREAMers, the undocumented youths who hope to remain in the United States, make their point during a 2016 presidential rally. (Photo courtesy EducationVotes.NEA.org)

But while those who were brought to the United States illegally as children can breathe a sigh of relief, the Trump Administration in that same document declared an end to the Obama plan to shield immigrant parents of U.S. citizens and legal residents from deportation.

Dreaming of legal status: The so-called DREAMers get their name from the never-passed Development, Relief, and Education for Alien Minors, or DREAM, Act. It would have provided a multi-phased process for such illegal U.S. immigrants to obtain permanent residency. The DREAM Act was first introduced in 2001.

Throughout his tenure, Obama Administration tried to work out an immigration deal with lawmakers, but that was stymied in large part by Republicans who viewed the granting of legal status to undocumented entrants as amnesty. So the 44th president took unilateral executive action.

As the Homeland Security notice pointed out, Obama issued a policy memo on June 15, 2012 — five years ago to the day of the Trump Administration revocation? Coincidence … ? — creating the DACA program. Many of those affected by DACA are DREAMers.

Two years later, an Obama executive order shielded up to 5 million immigrants from deportation, via in large part those affected by Deferred Action for Parents of Americans, or DAPA, program.

Since then, legal and, especially during the 2016 presidential campaign, political battles have ensued. As a candidate, Trump vowed to rescind Obama's no-deportation order totally. Last night, his administration backed off in the cases of DREAMers.

That move will no doubt upset Trump supporters, but the immigrant community applauded Trump's decision.

Payroll taxes and undocumented residents: The Internal Revenue Service was not involved, as far as I can tell, in the decision to allow DREAMers to remain in the U.S. under the Obama guidelines. But I suspect the tax agency and U.S. Treasury approve.

The reason? Many undocumented residents hold jobs and pay taxes.

A large chunk of the taxes from undocumented workers come via payroll taxes collected on their income.

Nearly half, or 3.4 million, of undocumented workers paid Social Security taxes, according to 2014 estimates from the Social Security Administration (SSA). The agency doesn't have an exact figure (or even an estimate) for how much this group paid in taxes that year, an official SSA estimate for 2010 put the amount that unauthorized immigrant workers and their employers contributed in payroll taxes that year at $13 billion.

I've talked with CPAs and other tax preparers, here in Texas and across the U.S., who work with undocumented clientele, as well as with IRS reps about this phenomenon.

Folks who are here without documentation entered the country that way in many cases because they could not/cannot get in as quickly via legal channels. But once they are here and have established lives, albeit illegally, they still pay their taxes on the money they earn in the United States.

For many, it's a simply a matter of doing what's right when it comes to taxes in their adopted, again it must be noted illegally so, homeland. Yes, we humans are an overflowing basket of contradictions.

But there's another, more practical reason for filing a return with the Internal Revenue Service. Many undocumented residents also hope that their compliance with U.S. tax laws will help if/when they are able to apply for legal residency status.

Until that happens, though, Uncle Sam gets to keep the tax money, notably the payroll withholding amounts that go toward Social Security and Medicare, that are paid by undocumented workers and their employers.

An Institute on Taxation and Economic Policy (ITEP) report, first issued in February 2016, and updated this March found that undocumented immigrants are taxpayers too and collectively contribute an estimated $11.74 billion to state and local coffers each year via a combination of sales and excise, personal income, and property taxes

Other ITEP highlights include:

They are correct. While dollars are a big driver of much government policy, simply adding to Uncle Sam's and states' coffers does not override federal immigration laws. Yet.

But the amounts and the efforts to pay taxes by undocumented workers, both those who knowingly came into the United States illegally and those brought here at ages too young to understand they were breaking the law, are worth noting.

One of the oft-cited arguments against immigrants is that they are a fiscal drain on the resources paid for by native-born Americans and legal residents. Obviously, the more people the more it costs governments at all levels to provide services for them.

But as the tax paying data shows, it's not a total give and no take situation.

This is a comment back to Ann. I agree with you, which is why everyone should leave the united states and give the Native Americans back what is rightfully theirs. Trust me, everyone knows whats going on in America and the horrible leadership that is going on. If everyone could go back to their normal land I'm sure everyone would run out fast. Everyone should take multiple history classes before commenting on something they are very unsure of, president as well.

No one should be allowed to come into our country unless they come in the legal way. It is not fair to the people who have waited and done it the proper way. No exceptions should be allowed . Obama has screwed up a lot when he was our President.