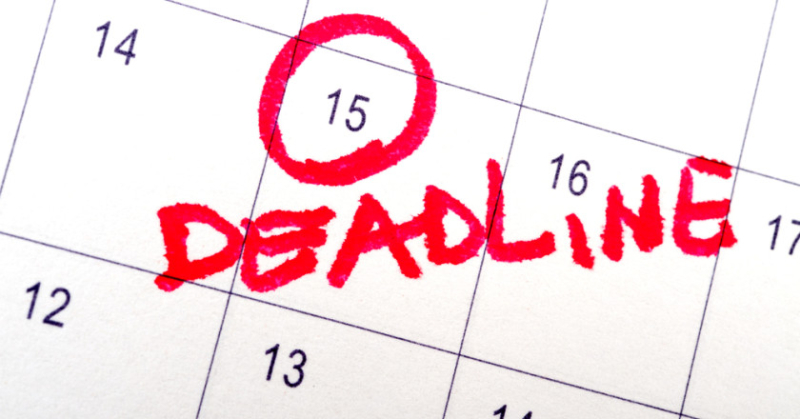 It may be summer, but for some folks, Tax Day is coming up again on Thursday, June 15.

That day is the deadline that millions of Americans face to pay their second estimated tax amount for the 2017 tax year.

It's also the due day for U.S. taxpayers living abroad to file their 2016 tax returns.

Estimated tax time again: The U.S. tax system is based on the premise that the U.S. Treasury gets its portion of individual taxes as we earn our money. For most of us, that happens via payroll withholding from our checks that we get from our employers.

But when we have income that's not subject to withholding, be it a side job or full-time self-employment or investment earnings, then we have to pay tax on those amounts via estimated tax payments.

Generally, those estimated tax payments — made electronically or by sending in a check with Form 1040ES — are due four times a year. The table below shows the estimated tax due dates and the earnings periods covered.

But U.S. taxpayers living in another country also have a special deadline to file their annual tax returns. It's an automatic extension from the April due date to the impending June 15.

Those overseas U.S. taxpayers, however, still were supposed to pay any taxes due by the regular April filing deadline, which fell on April 18 this year.

If you didn't send Uncle Sam that money back then, the Internal Revenue Service will give you a break and won't assess a failure to pay penalty if you file and pay you tax bill in full by June 15. You still face, however, interest that's been adding up on the unpaid amount.

And if you still need more time, then you can send in IRS Form 4868 to get until Oct. 16 to file. Yes, that October normal extension date is a day later because the 15th this year falls on a Sunday.

Free File still applies: If you are a U.S. citizen or resident alien, generally referred to a Green Card holder, you can use the IRS Free File program as long as your adjusted gross income meets the threshold. That's $64,000 this year.

If you can't use Free File, you can still file electronically by using commercially purchased tax preparation software.

Convert your currency: Overseas taxpayers have one other added task. They must convert any foreign currency amounts they received to U.S. dollars on their IRS filing.

The IRS doesn't have an official exchange rate. Generally, it accepts any posted exchange rate that is used consistently. When valuing currency of a foreign country that uses multiple exchange rates, use the rate that applies to your specific facts and circumstances.

Taxpayers generally use the yearly average exchange rate to report foreign-earned income that was received regularly throughout the year. However, if you had foreign transactions on specific days, you may also use the exchange rates for those days.

I know, Jamie. The IRS calendar certainly is a bit off kilter! Kay

Kay this is a great remider! You would think the 2nd payment due date would be JULY 15th so it's good to remember that the quarterly payments are not evenly spread apart.