Workplace tax-free benefits help those who bicycle to work every day, not just on National Bike to Work Day

I didn't bike to work today or any other May day, mainly because I work from home. I just walk down the hall to my office and get started. OK, after first eating breakfast, thumbing through the newspapers and brewing a cup of coffee.

The other reason I don't bike to work is obvious in the photo below. 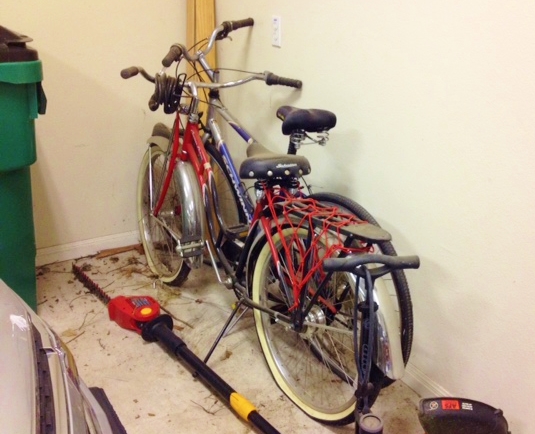 Both tires on my bike (the red one in front), as well as on the hubby's, are flat. As flat as the proverbial pancakes. They've been flat so long that that hand pump, partially pictured at the back of the bikes, probably wouldn't even do the job.

Excuses Reasons for no longer biking: We got our bikes when we lived in Florida. Our neighborhood there was flat, filled mostly with retirees who drove around 5 mph, and most of the year the weather was great for a turn through the streets.

Since we arrived back in Texas, our bikes have been unused. Yes, that's because, as you can see, the tires are flat.

But the main reason we've abandoned our bikes to a corner of our garage is that our Austin neighborhood is hilly. Very hilly.

I see competitive bicyclists using it as a training course and if they're struggling there's no way in heaven or hell I could manage these streets on two wheels. Walking them is tough enough.

So I missed Bike to Work Day. But millions participated, many here in Central Texas where it's already 90 degrees and 90 percent humidity. Good for them.

Good also for the companies that offer their environmentally and health conscious employees benefits for biking to work every day, not just a month or one day a year. 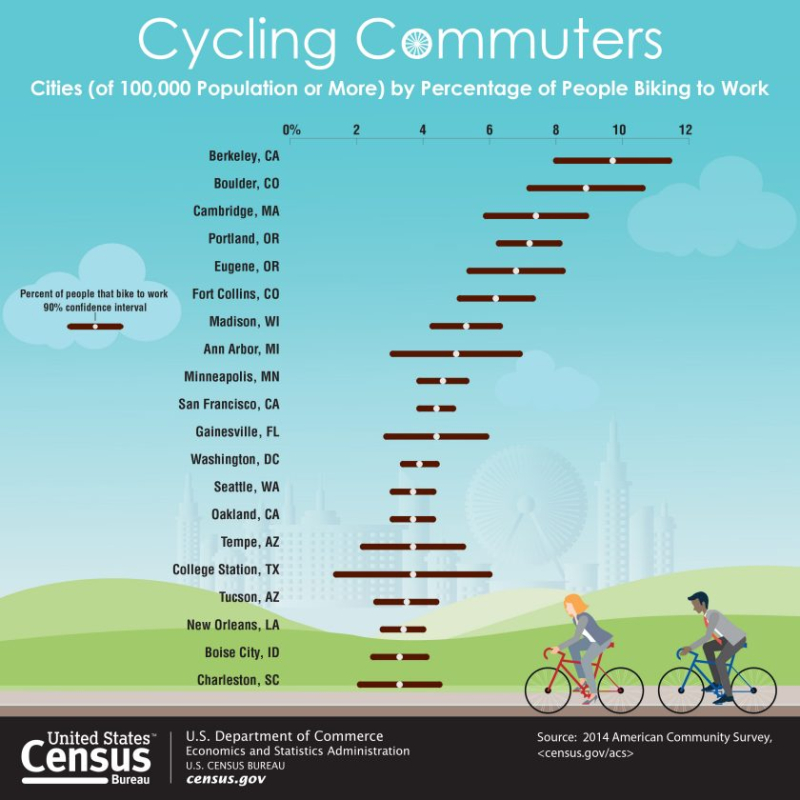 Employers, if they decide to do so, can provide up to $20 per month to as a tax-free benefit to employees who regularly bike to work.

Officially, the worker must complete a qualified bicycle commuting month. This means that for each two-wheeling employee, a qualifying month is one in which the worker regularly uses a bicycle for a substantial portion of travel between home and work and doesn't take any other transportation benefits.

That means you can't drive to work and get workplace parking compensation or take mass transit and be reimbursed by your workplace for those bus or subway passes and also decide to bike to work on nice days and get the bicycle benefit.

There's some good news, though, on the bicycling benefit. It also can help cover reasonable bicycling expenses, which include the purchase of a bicycle and the vehicle's improvements, repair and storage. Again, these are covered as long as the bicycle is regularly used for travel between your home and work.

Four+ wheels benefits beat two wheels: Yes, I agree. A $240 annual maximum for pedaling yourself to the office is not much.

And it is a bit of a slap in the face when you consider that workplaces provide much more generous transportation benefits for mechanized vehicular commuting costs.

Under the Omnibus Appropriations and Tax Extender Package, usually referred to as the Protecting Americans from Tax Hikes (PATH) Act, that was signed into law in December 2015, parking and mass transit tax-free fringe benefits were given the same weight.

That means for the 2017 tax year, a workplace can provide workers who use more traditional means to get to their jobs monthly tax-free benefits of up to $255 for transit and eligible van pooling passes and $255 for qualified commuter parking. The amount will be indexed in future tax years for inflation.

Yep, one month of parking your car at work is more than what is provided for a full year of bicycling to work.

But at least bike commuters do get at least some workplace benefit consideration.

As for bringing it up to more equitable levels for other modes of transportation, let your Senators and Representatives know that you'd appreciate their support in equalizing workplace commuting benefits for all.

I hope your bike to work was as fun as PeeWee Herman's ride. You can see more entertaining bicycling GIFs at Twitter's #BikeToWorkDay hashtag.