Donald Trump met with truckers outside the White House and got an up-close-and-personal look at their vehicles before the drivers and industry executives went inside to share their transportation policy thoughts with the president on March 23, 2017.  Click screen shot to view the full meeting on YouTube.

The long Memorial Day weekend is the unofficial start of summer vacations in the United States and most of those are family road trips.

For the last few years, gasoline prices haven't been that bad. But Donald J. Trump says he's amenable to adding a few more pennies to our gasoline gallons via an increase in the federal gasoline excise tax.

"It's something that I would certainly consider," Trump told Bloomberg News during an Oval Office interview yesterday, May 1.

However, Trump said his support of a hike in the federal gas tax, which has been stuck at 18.4 cents per gallon since 1993, would be only "if we earmarked money toward the highways."

The last replenishment of the national account for roads, the Highway Trust fund, was in 2015's Fixing America's Surface Transportation Act. That bill did not include a gas tax hike.

Truckers drive home tax message: Apparently, however, Trump listened to the truckers and trucking industry executives he met with in March at the White House.

The transportation industry has long supported an increase in federal fuel taxes as a way to pay for maintenance and improvements to roads and other infrastructure projects they rely on to do their daily jobs.

The White House's one-page tax reform/tax cut outline/plan released April 26 didn't mention the gasoline tax. But then, it didn't mention a lot, or a lot of detail, on many tax provisions that are likely to come up when Representatives and Senators get around to tax reform specifics later this year.

White House Press Secretary Sean Spicer clarified his boss' Bloomberg comments later Monday, saying that Trump isn't specifically supporting an increase, but that the president is keeping an open mind about it "out of respect" for trucking-industry interests.

Upon hearing that news, I suspect at least a few truckers followed the prez's example and let out a few jubilant big rig horn blasts.

Targeted tax well-spent: Personally, I also support an increase in the federal gasoline tax, primarily because I spend a lot of time on the road to and from my mom's place. Those hours on the highway have convinced me that a few more dollars per fill-up could be well-spent.

A lot of the asphalt on the roads I regularly travel needs some work and some of it needs a lot of repair. When that maintenance is put off because there's not enough money for it, the roads will just continue to deteriorate.

I suspect other drivers, as well as truckers, who are behind the wheel for a living, can appreciate smoother roads with fewer potholes, roadways with fresh reflective paint and striping, highway interchanges capable of handling increasing traffic and better signage.

Plus, I want to make sure that the big bridge I use to cross the Pedernales River remains in good shape.

Gas tax foes: Others, however, are not convinced.

"There is no need and no excuse for a tax hike," said anti-tax advocate Grover Norquist, founder of Americans for Tax Reform, following Trump's comments. "We can have more roads at lower prices if Congress repeals destructive laws and rules it itself established for sordid reasons."

Tax opponents also say a federal gas tax hike would disproportionately hit rural residents, many of whom use more fuel to traverse the distances in their sparsely populated areas. They also argue that the gas tax is regressive, placing a bigger burden on lower- and middle-income families.

And, say gas (and other) tax foes, infrastructure projects are best done at the state and local levels where residents can more readily see who their tax dollars are spent.

State gas taxes, too: Speaking of those other level of government, many states have found they've had to increase their fuel taxes and other transportation related fees in an effort to bulk up their local road and infrastructure project funds.

The American Petroleum Institute's (API) April 2017 report shows that the U.S. average tax on gasoline is 49.50 cents per gallon (cpg). That' an increase of 6 cents/gallon from the January 2017 study. That average includes the 18.4 cpg federal tax on gasoline. 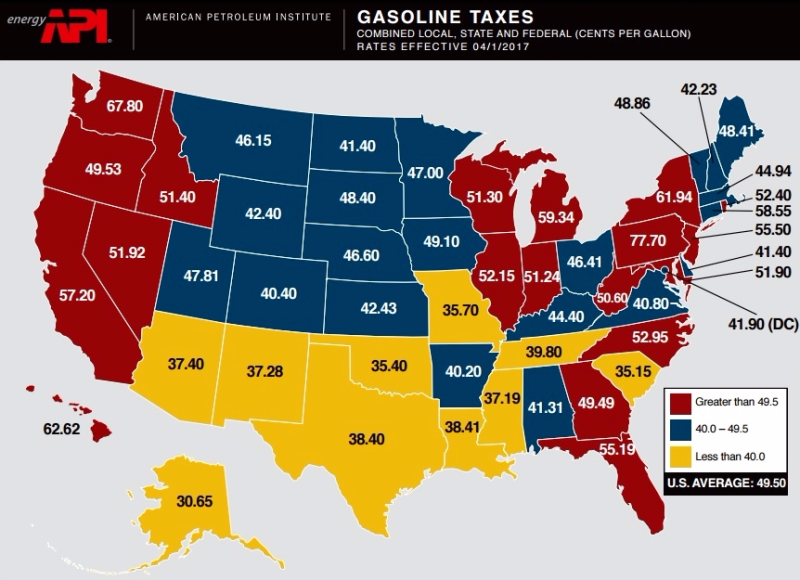 At the state level, the average gasoline excise tax is 21.09. That's also a 6 cent per gallon increase from the start of this year.

Adding all these taxes and fees to the state excise taxes, says API, results in a volume-weighted average state and local tax of 31.1 cpg.

Gas tax regional variances: Regionally, gasoline taxes were highest in my old MidAtlantic stomping grounds, with an average tax of 62.51 cents per gallon. Drivers in the west pay on average 55.21 cents per gallon in gas taxes.

The cheapest gasoline, at least from a tax standpoint, is in the South. That region's average gas tax was just 38.71.

Below is the API's complete look at regional gas taxes for the first quarter of 2017.

API's state-by-state examination shows that the 10 states that collected the most in combined federal and state gasoline taxes and fees between Jan. 1 and March 30 were:

Taxes were the smallest part of a gallon of gasoline's price last quarter in:

Would you be willing to pay a bit more each time you put fuel in your vehicle if it meant better roads and other transportation project funding? Or would any added auto cost be too much for your budget?