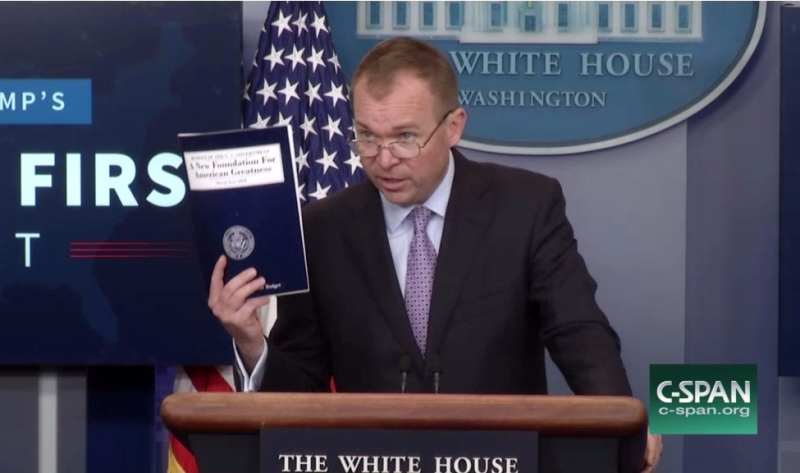 It's official. The amount of money going to the Internal Revenue Service under Donald J. Trump's first federal budget gets cut yet again.

Tax geeks, however, were thumbing through "The New Foundation for American Greatness," as the huge document is titled, looking for the Treasury section. That's where the money for the IRS is discussed.

And as has been the case since 2010, the IRS allocation is less than the year before. 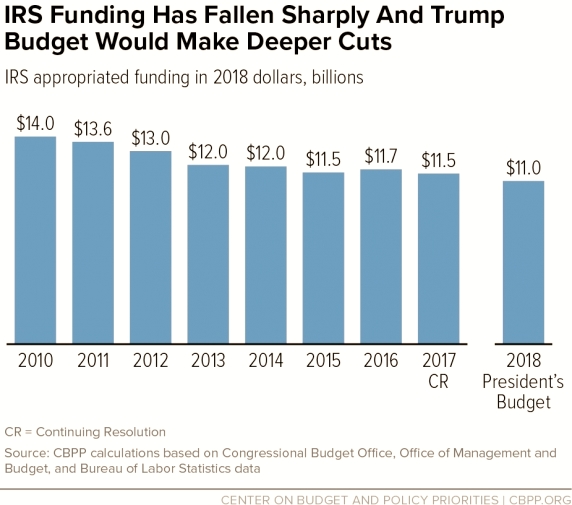 Maybe it's better for the IRS. After all, hopes were raised a tiny bit with President Obama asked for more money in his budgets, only to see the Republican-controlled Congress cut that amount.

At least now they don't have to go through that … unless GOP lawmakers cut Trump's request even more.

Budget wish list probabilities: Yep, that could happen because budgets presented by all presidents are more wish lists than actual working financial documents. It's no different in Trump's first foray into Uncle Sam's operational needs.

In fact, a president's first budget typically is used to highlight campaign promises rather than be a financial plan that will be acceptable to the final Congressional arbiters of federal spending.

And in Trump's case it could be argued that he'll get neither a political advantage nor actual dollars from his inaugural budget.

The reason? Many, including some Republicans, have declared Trump's first budget DOA on Capitol Hill.

Why? A lot of people in states that voted for Trump last November will be particularly hard hit if all the proposals in the president's budget are approved.

Office of Management and Budget (OMB) Director Mick Mulvaney took such attacks in stride when he talked with reporters a few days before the budget's official release.

After a couple of days to mull the reaction to that budgetary approach, Mulvaney doubled down today in the release of the full budget, officially titled "The New Foundation for American Greatness." (The so-called skinny budget released in March was an outline of this larger document).

"We look at this budget through the eyes of the people who are actually paying the bills," Mulvaney said this morning. "Compassion needs to be on both sides of those equations."

Buckle in for budget testimony: Now Trump Administration officials must make that or their own cases as to why Congress should give the prez what he wants in fiscal 2018, which begins Oct. 1.

Treasury head heads to W&M: Treasury Secretary Steve Mnuchin will be among the first to formally argue for Congressional acceptance of the Trump FY18 budget when he appears Wednesday, May 24, before the House Ways and Means Committee.

While taxes obviously are a component throughout the budget, at least part of the questions by the House tax-writing panel members will focus on funding for Internal Revenue Service operations.

Praise, but less money for IRS: The budget document devotes 49 pages to funding for Treasury, the department that oversees the IRS. Here is what it has to say (emphasis mine) about funding for the IRS:

The Internal Revenue Service (IRS) collects the revenue that funds the Government and administers the Nation's tax laws. During 2016, the IRS processed 244 million tax forms and collected $3.3 trillion in taxes (gross receipts before tax refunds), totaling 93 percent of Federal Government receipts. The IRS taxpayer service program assists millions of taxpayers in understanding and meeting their tax obligations. The IRS tax enforcement and compliance program deters taxpayers inclined to evade their responsibilities while pursuing those who violate tax laws.

The 2018 Budget provides $10,975 million for the IRS to administer the tax code and implement key strategic priorities.

For folks not fluent in budget-speak, $10,975 million is just less than $11 billion. That figure is down from the current IRS appropriated budget of $11.2 billion.

So that means despite the complimentary language leading to the dollar discussion, Trump wants to cut IRS funding this coming fiscal year.

IRS funding targets: The budget proposal cites three priorities on which the IRS should spend its smaller pot of funds.

Enforcement — Money here would go toward IRS actions that protect revenue by identifying fraud and preventing issuance of questionable refunds including those related to identity theft; increase compliance by addressing offshore tax evasion; strengthen examination and collection programs; and address compliance issues in the tax-exempt sector.

Taxpayer Service — The funds in fiscal 2018 will allow the IRS to continue delivering variety of in-person, telephone, and web-based taxpayer services. These tools help taxpayers understand their obligations, correctly file their returns and pay due taxes in a timely manner.

One of the budget's proposals would require taxpayers, their spouses and all qualifying children have a valid Social Security Number in order to claim these two refundable tax credits. By demanding Social Security identifiers for the whole family, undocumented individuals who file returns using an Individual Tax Identification Numbers (ITIN) won't be able to claim the EITC or additional child tax credits.

The budget also includes a proposal to give the IRS more authority to correct certain errors on tax returns claiming the American Opportunity tax credit. This education tax break was an Obama priority that became a permanent part of the tax code under the Preventing American from Tax Hikes (PATH) Act in December 2015.

Finally, at least for purposes of this post, Trump's budget says it wants to "explicitly provide the IRS authority to increase its oversight of paid tax return preparers."

In keeping with the element of suspense that this president, harking back to his TV days, likes to use, I'll look at each of these budget issues in more detail in future posts.

How could anyone question the "The New Foundation for American Greatness"? Got to love the patriotic / Orwellian names these characters give to their destructive programs. ha ha! (not funny though) Max @ http://www.mightytaxes.com/