Tax audit lessons from 'Mom' on, of course, Mother's Day

Happy Mother's Day! What a perfect day to talk about tax audits.

You don't see the connection? Then you missed the season finale last week of the CBS show "Mom." I'm not really a fan, but it was on in the background as we were fixing dinner. 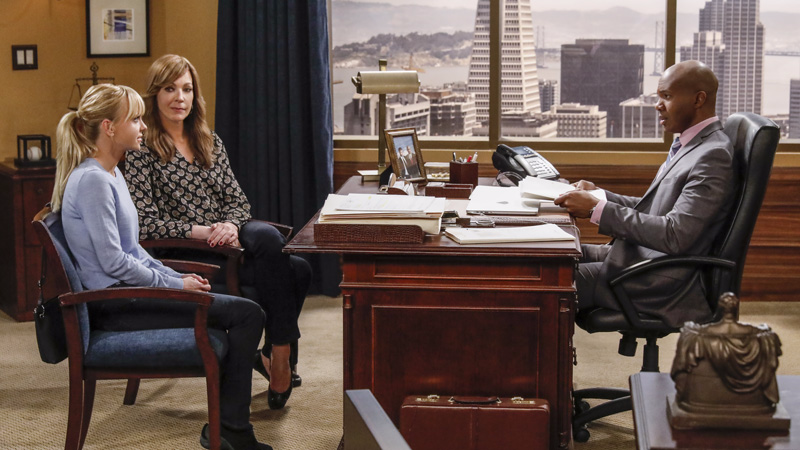 Scene from the May 11 season finale of CBS sitcom "Mom," where the characters portrayed by Anna Faris and Allison Janney consult an attorney, played by Leonard Roberts, about some tax trouble. (Photo courtesy CBS)

But as I was chopping veggies I heard "the IRS put a lien on my account." So naturally dinner got delayed by a half hour.

As for the tax and Internal Revenue Service component, well, remember it is a sitcom. But it made some decent points as long as you take the script as a broad broadcast comedy guideline to the tax code.

Here are the three tax biggies, fittingly on this Mother's Day, that "Mom" made.

1. Hire a tax professional.
First, get professional help if the IRS examines your returns, or in this case, lack of returns. Christy's effort to quickly learn as much as she could about taxes before the IRS hearing was amusing and futile. That's why she pushed Bonnie to hire a professional, who happened to be Ray, her recently discovered half-brother who is an attorney.

He's the one who points out "the one mistake" Christy made: taking her mom to the IRS meeting.

Again, remember it's TV. Since Christy isn't an attorney, Bonnie had to be at the IRS meeting.

But when you hire a tax professional who can represent you before the IRS — that's an attorney, Certified Public Accountant (CPA) or Enrolled Agent (EA) — then you put your tax nightmare in their expert, experienced hands.

As your official representative, he or she handles all the talking, writing, documents and negotiations with the IRS auditor. That means you don't have to go to the interview and meet face-to-face with the auditor. Your attorney or CPA or EA can do it for you.

The reason such distance often is advisable is that a person facing tax trouble too often wants to over explain and volunteer information that could create additional problems.

So rule #1 that "Mom" clearly made is get qualified professional tax help as soon as your learn you're under IRS audit.

2. Income doesn't have to be cash.
One reason Bonnie hadn't filed taxes in recent years was because in lieu of her services as an apartment complex manager, she got free lodgings at the property.

She didn't realize the value of her rent counted as earnings when it comes to taxes. It does. In fact, the IRS considers a whole of stuff as taxable income, like Bonnie's bartered housing.

If you have any questions as to what is taxable income vs. what's nontaxable, check out IRS Publication 525 for details.

3. Cut a deal.
The episode's happy resolution was that Ray, of course with Christy along since she did much of the early tax prep work, got Bonnie an installment payment plan to settle her long unpaid taxes.

Setting up a system to pay your overdue tax over time generally makes both the IRS and the owing taxpayer happy. Or, as one of the show's supporting characters noted, "The IRS just wants to make a deal. They don't try to put anybody in jail."

This being a TV show, there was, of course, a tax retort from another character who pointed out that the IRS put Wesley Snipes in jail, "robbing us of so many action-packed movies."

Still, if your tax nonpayment is not egregious, and you're not a celebrity that Uncle Sam's tax officials can use as a media catching example, ask the IRS for a plan to pay your debt over time.

Yes, you will pay interest on the payments. And yes, the penalties you incurred for not paying typically are rolled into the total due amount. But it will get you back in tax good graces without unduly damaging your finances.

And such a relatively easy resolution is something that every mom hopes for her children's tax situations.

I think there's a good chance they missed the boat on the employer-provided lodging question. Bonnie is the apartment complex's manager and performs nearly all repair and maintenance services for the residents. It's highly likely she's required to live onsite in order to discharge the duties of her job. I believe this is the case if I recall that earlier episode correctly. If it is, all three of the requirements for excluding the value of her lodging from her income are met.