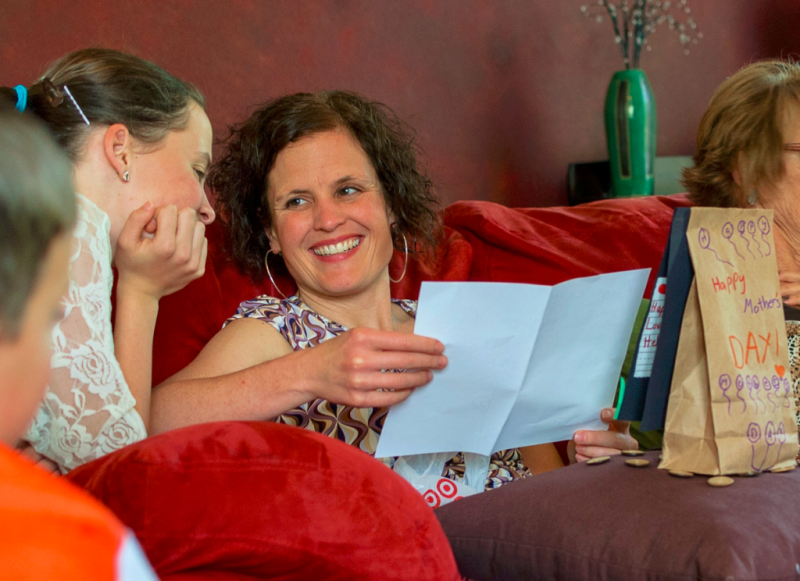 Based on how much Mom is enjoying her homemade card, I'm sure she'll absolutely love the creatively wrapped Mother's Day gift. (Photo by Loren Kerns via Flickr CC)

Moms usually embrace the adage that it's the thought that counts when it comes to Mother's Day gifts. They love those macaroni picture frames we made as kids as much as the store-bought gifts we started giving them as soon as we were making our own money.

In the 45 states and District of Columbia that collect sales tax, they are hoping we spend a lot on Mom this weekend so that their tax collectors can get a cut.

Most reliant on sales tax revenue: That's particularly true in Washington. The Evergreen State depends most heavily on state and local sales tax money, according to research by the Tax Foundation based on fiscal year 2014 data.

Slightly more than 45 percent of Washington State's total tax collections come from the taxes tacked onto retail purchases, according to the Washington, D.C.-based tax policy group's examination. When you add local taxes and transit taxes in some locales to the state's 6.5 percent sales tax, the combined levy on Washington purchases can be more than 10 percent.

The reason? There's no corporate or individual income tax in that Pacific Northwest state, although it does levy a gross receipts tax in lieu of the corporate income tax. 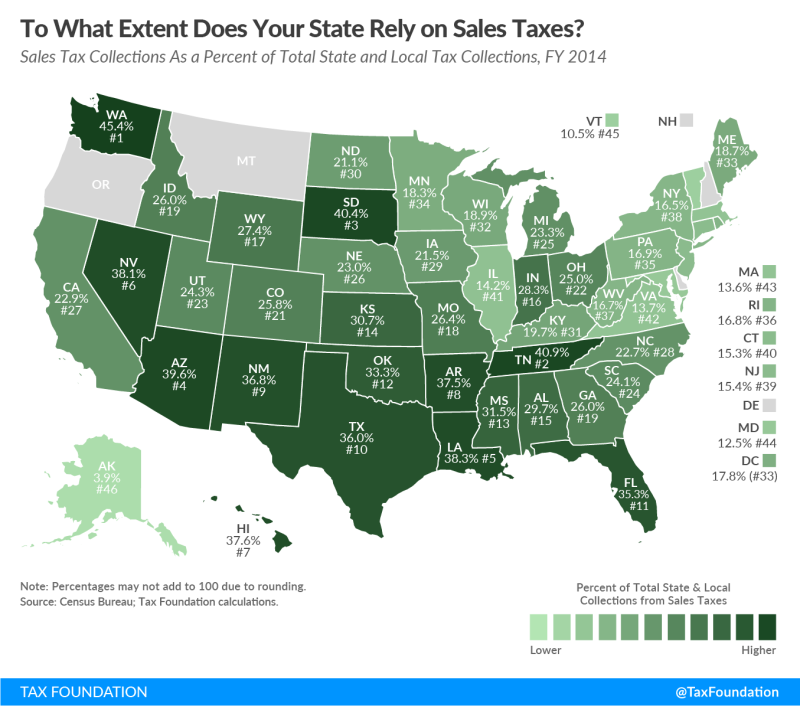 Tennessee comes in second with around 41 percent of its income derived from state and local sales taxes. Like Washington State, the Volunteer State doesn't have an individual income tax, except on interest and dividend earnings.

South Dakota is the third most heavily dependent at just more than 40 percent. Stop me if you've heard this, but the Mount Rushmore State also doesn't have a corporate or individual income tax.

Rounding out the top five states most reliant on sales tax are Arizona at 39.6 percent and Louisiana at 38.3 percent.

For all y'all who've read my frequent posts about living in a no-income-tax state, I wanted to let you know that Texas comes in at #10. Thirty-six percent of the Lone Star State's revenue is from state and local sales taxes.

Other state tax sources: So who gets most of their tax revenue from sources other than state and local sales taxes?

Alaska was the winner when it came to not relying on sales taxes, with less than 4 percent of its revenue coming from state and local sales taxes.

Yes, I (and the Tax Foundation) know that the Last Frontier is the only state without a state income or sales tax. However, Alaska law lets local jurisdictions levy their own sales taxes.

Also low on the sales tax reliance list are Vermont at 10.5 percent of total state income from such levies; Maryland, one of my old stomping grounds, at 12.5 percent; Taxachu… I mean Massachusetts at 13.6 percent; and Virginia at 13.7 percent.

On average, according to the Tax Foundation, 23.3 percent of state and local tax revenues in fiscal year 2014 came from sales taxes. And that percentage is this week's By the Numbers figure.

So if you're shopping today for the perfect gift for Mom, be sure to take your state and local sales taxes into account.

thanks so much for sharing with us this amazing post

Woah! never thought tax toll prices will increase suddenly, I don't know why our government are such obsessed with it, this literally sucks.

Glad I read this information its really helpful for me and I will save it too. Thanks for sharing with everyone.Very useful stuff for everyone who read it and for me too. Thank you for this kind of stuffs.